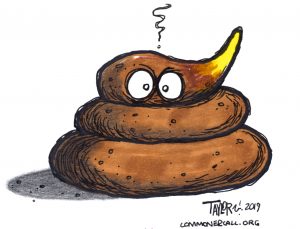 This would all be entertaining if we were watching a movie, say the equivalent of ‘Idiocracy’. But we’re not; we are living this shit show.

Kompromat is a Russian KGB slang expression for compromising material. Wikipedia notes Kompromat as “part of the political culture of Russia”. Different from opposition research, with Kompromat “such information is used to exert influence over people”.

The Mueller report, on Volume 2, Page 3, provides an excellent example of what Kompromat looks like:

The Campaign’s response to reports about Russian support for Trump. During the 2016 presidential campaign, questions arose about the Russian government’s apparent support for candidate Trump. After WikiLeaks released politically damaging Democratic Party emails that were reported to have been hacked by Russia, Trump publicly expressed skepticism that Russia was responsible for the hacks at the same time that he and other Campaign officials privately sought information ■■■■■■■■■■■■■■■■■■■■■■■about any further planned WikiLeaks releases. Trump also denied having any business in or connections to Russia, even though as late as June 2016 the Trump Organization had been pursuing a licensing deal for a skyscraper to be built in Russia called Trump Tower Moscow. After the election, the President expressed concerns to advisors that reports of Russia’s election interference might lead the public to question the legitimacy of his election.

[Nore: The black marks are redactions in the report.]

Most notable is Trump’s denial of “any business in or connections to Russia, even though as late as June 2016 — right in the midst of the campaign — the Trump Organization had been pursuing a licensing deal for a skyscraper to be built in Russia called the Trump Tower Moscow.” Would this conflict if known have set back Trump’s campaign? Who knows, but that is not the point.

Russia knew Trump was lying to U.S. voters about his pursuit of Trump Tower Moscow. This knowledge is an example of how Kompromat could work.

But the facts are: Trump lied about no “business in or connections to Russia”, many more people lied on his behalf both during his campaign and since he’s moved into the White House, some Trump persons – notably long-time Trump lawyer Michael Cohen – have gone to jail for their lies around this and other Trump actions. Cohen has even made accusations of how lies he told under oath were coordinated with Trump lawyers to align with lies of other Trumpster testimony.

People around Trump have paid a heavy personal price for covering up Trump’s lies.

Of course that is the premise of impeachment, to hold Trump personally accountable for his criminal actions and to demonstrate that in our democracy no one — even the President — is above the law.

If we abide by Mueller’s conclusion that Trump crimes do not rise to the level of conspiracy to act in concert with a foreign power, we are still reminded daily of Trump’s openness to relationships that put money is his pocket, that in any other administration would have resulted in hearings over conflict of interest and corruption.

Look no further than Trump’s D.C. hotel and the regular use by countries, companies, lobbyists and persons that stand to benefit from his influence:

2) Or T-Mobile executives spending $195,000 at Trump’s hotel while seeking Federal Communications Commission approval for a $26 billion merger with Sprint.

Now we have news of a wealthy Iraqi sheikh staying at Trump’s D.C. hotel for 26 nights while lobbying Sec. of State Mike Pompeo and national security adviser John Bolton “to achieve our mutual interest to weaken the Iranian Mullahs regime and end its hegemony”. The Iraqi sheikh, Nahro al-Kasnazan, offered that “we normally stay at the Hay-Adams hotel”.

Is This the New Normal for U.S. Government Corruption?

Not a single Trump cabinet member has been held criminally accountable for their corruption. As easy as it would be to build a long list of countries, persons and companies electing to spend a great deal of money at Trump’s hotel, it’s as least as easy to build a list of corrupt persons from Trump’s administration.

1) Former Trump Environmental Protection agency chief Scott Pruitt ran up bills of $163,000 for first class air fare and charter flights. Pruitt’s final ‘straw’ was his effort to use his influence to land his spouse a job with a $200,000 salary.

Golf on Your Own Damn Dime

I have no intent to be exhaustive, but here’s a proposal for a legislative act to take the fight directly to the abusers. Former White House ethics chief under Obama, Walter Shaub, is proposing a “Golf on Your Own Damn Dime Act”.

Trump’s criminal actions may not rise to a standard of conspiracy with Russia against the U.S. That a sentence can be written like that as a point benefitting a sitting president is damning, but not a legal indictment. Similarly Trump presides over a shockingly corrupt administration. Other than Flynn — who was jailed for lying to the FBI —  no one else o his cabinet has gone to jail.

Trump is guilty of governing as a prototypical authoritarian, often creating a crisis that he then solves as if only he could do so. The latest example of Trump avoiding a crisis of his own making is his agreement with Mexico to avoid Trump invoking punitive trade tariffs.

“The deal to avert tariffs that President Trump announced with great fanfare on Friday night consists largely of actions that Mexico had already promised to take in prior discussions with the United States over the past several months, according to officials from both countries who are familiar with the negotiations.”

All of what I’ve noted would be entertaining if we were watching a movie, say the equivalent of ‘Idiocracy’. But we’re not; we are living this shit show.

As we suffer through our live reenactment of ‘Idiocracy’ we read headlines like this:

The best thin gruel we have so far is House Speaker Pelosi’s proven ability to get deeply under Trump’s thin skin; her latest being, “I don’t want to see him impeached. I want to see him in prison.”

I don’t take Pelosi’s comment literally – what’s most important, what we all want, is for Trump to be in the White House for the shortest amount of time possible.

Impeachment hearings and impeachment are likely – but we’re still going to have to win an election.