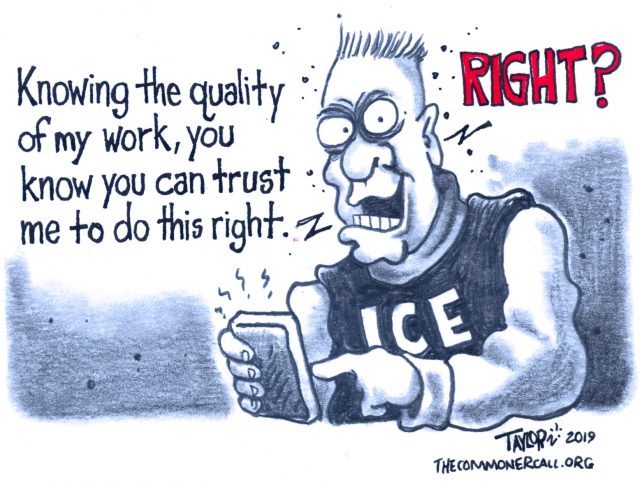 In June 2018, more than 400,000 people protested the Trump administration’s policy of separating families at the border. The following month saw a host of demonstrations in New York City on issues including racism and xenophobia, the abolition of Immigration and Customs Enforcement (ICE), and the National Rifle Association.

Given the ease of connecting online, it is unsurprising that many of these events got an organizing boost on social media platforms like Facebook or Twitter. A recent spate of articles did bring a surprise, however: the Department of Homeland Security (DHS) has been watching online too. Congress should demand that DHS detail the full extent of social media use and commit to ensuring that the programs are effective, non-discriminatory, and protective of privacy.

As shocking as these revelations are, DHS’s social media ambitions are both broader and opaque.

Last month, for instance, it was revealed that a Virginia-based intelligence firm used Facebook data to compile details about more than 600 protests against family separation. The firm sent its spreadsheet to the Department of Homeland Security, where the data was disseminated internally and evidently shared with the FBI and national fusion centers; these centers, which facilitate data sharing among federal, state, local, and tribal law enforcement, as well as the private sector, have been heavily criticized for violating Americans’ privacy and civil liberties while providing little of value.

In the meantime, Homeland Security Investigations — an arm of ICE created to combat criminal organizations, not collect information about lawful protests — assembled and shared a spreadsheet of the New York City demonstrations, labeling them with the tag “Anti-Trump Protests.” And as Central American caravans slowly traveled north, DHS’s Customs and Border Protection (CBP) drew on Facebook data to create dossiers on lawyers, journalists, and advocates — many of them U.S. citizens — providing services and documenting the situation on the southern border. …

(Rachel Levinson-Waldman is senior counsel to the Liberty and National Security Program at the Brennan Center for Justice.)

(Commoner Call cartoon by Mark L. Taylor, 2019. Open source and free for nn-derivative use with link to www.thecommonerall.org )

The Department of Homeland Security (DHS) is rapidly expanding its collection of social media information and using it to evaluate the security risks posed by foreign and American travelers. This year marks a major expansion. The visa applications vetted by DHS will include social media handles that the State Department is set to collect from some 15 million travelers per year. Social media can provide a vast trove of information about individuals, including their personal preferences, political and religious views, physical and mental health, and the identity of their friends and family. But it is susceptible to misinterpretation, and wholesale monitoring of social media creates serious risks to privacy and free speech. Moreover, despite the rush to implement these programs, there is scant evidence that they actually meet the goals for which they are deployed.

While officials regularly testify before Congress to highlight some of the ways in which DHS is using social media, they rarely give a full picture or discuss either the effectiveness of such programs or their risks. The extent to which DHS exploits social media information is buried in jargon-filled notices about changes to document storage systems that impart only the vaguest outlines of the underlying activities.

One [screening program] tool flagged posts in English by black and Hispanic users — like “Bored af den my phone finna die!!!!” (which can be loosely translated as “I’m bored as f*** and then my phone is going to die”) — as Danish with 99.9 percent confidence.

To fill this gap, this report seeks to map out the department’s collection, use, and sharing of social media information by piecing together press reports, information obtained through Freedom of Information Act requests, Privacy Impact Assessments, System of Records Notices (SORNs), departmental handbooks, government contracts, and other publicly available documents.

In light of DHS’s expanding use of social media monitoring programs, understanding the ways in which the department exploits social media is critical. Personal information gleaned from social media posts has been used to target dissent and subject religious and ethnic minorities to enhanced vetting and surveillance. Some DHS programs are targeted at travelers, both Americans and those from other countries. And while the department’s immigration vetting programs ostensibly target foreigners, they also sweep up information about American friends, family members, and business associates, either deliberately or as a consequence of their broad scope. …

FDR’s Letter To Corporate Democrats Will Blow Your Mind

MLK Identified ‘America’s Triplets’ — Racism, Yes, But What About Our Militarism & Materialism?

Want To Defeat Trump Without Campaigning For Biden? Here’s How