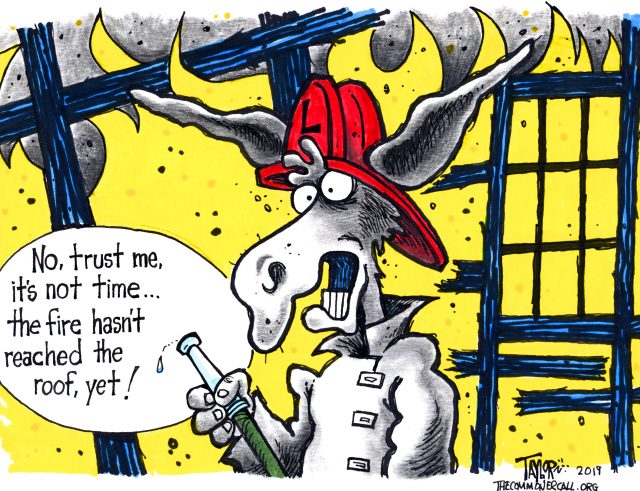 “I understand what you guys are doing with these bills, and that’s great. But you can’t fix the roof if the house is on fire. So it’s not acceptable that we’re ignoring this.”

Republicans view Democrats as the political party that’s scared of its own shadow. Republicans aren’t preoccupied with decency or morality, they just want to win.

Last November, the American people overwhelmingly elected a new majority in the House of Representatives, giving Democrats the power to impeach President Donald J. Trump — if it was warranted. But Wednesday, special counsel Robert Mueller publicly reiteratedwhat his report already made clear: that “if we had confidence that the president clearly did not commit a crime, we would have said that.” Put another way, Mueller noted that despite what Trump might think or tweet, he was not an exonerated man.

Democrats have a version of the report, and they have Mueller’s clear interpretation of the facts in it. And what have they done? Issued a lot of strongly worded statements, for one. Why did Democrats ask the American people to grant them the power of the majority if they are so reluctant to use it to protect the sovereignty of Congress?

Why did Democrats ask the American people to grant them the power of the majority if they are so reluctant to use it to protect the sovereignty of Congress?

Trump, perhaps more than any political figure of our time, is preoccupied with the optics of force and strength. What he sees is a Democratic Congress reluctant to wield the power the voters gave them in the midterms. He sees hesitancy and division. Mueller’s report and his subsequent press conference today has only made this clearer.

Notice that the words “insufficient evidence” were not a part of Mueller’s statement, despite what the president immediately and falsely claimed on Twitter. Also in contrast to Attorney General William Barr’s statement on the report, Mueller never uttered Trump’s favorite and false refrain, “no collusion.”

Big difference in the parties

The other week, I was talking with MSNBC host Joy Reid and she asked me what I thought the difference between Republicans and Democrats was when it came to congressional investigations. I spent the better part of a decade working on Capitol Hill for Republicans, including at the House Oversight Committee during the Obama years. I told her that Republicans love to fight and Democrats love to think. …

Unless they are on a secret Washington dinner party circuit, there are no hints that Robert Mueller and Nancy Pelosi are friends.

Sure, they overlapped 20 years ago with Mueller serving as US attorney for the northern district of California and Pelosi in her second decade representing San Francisco in Congress. And, like all prominent Washington public officials, they shared TV green rooms when Mueller was FBI director and Pelosi was on her first circuit as House speaker.

Despite their differing persona, these two past-normal-retirement-age figures born in the early 1940s boast important affinities. In a political age defined by corrosive cynicism, they both share an old-fashioned belief in institutions whether they are Mueller’s justice department or Pelosi’s House of Representatives.

Now it is up to Pelosi also to transcend politics – and do what the constitution demands.

That institutional faith pinpoints Mueller’s target audience for his nine-minute coda to this tenure as special counsel. In an extreme example of narrowcasting, masked by the careful legalistic language, Mueller was speaking directly to Pelosi.

His implicit message: my institution (the justice department) cannot indict a sitting president. But your institution (the House) can vote to impeach Donald Trump and mandate a Senate trial for obstruction of justice and possible other “high crimes and misdemeanors”.

Much of Mueller’s statement served as an explanation of the constraints that he felt because of a justice department legal interpretation that he cannot indict a sitting president. As Mueller bluntly put it: “A special counsel’s office is part of the Department of Justice, and by regulation, it was bound by that department policy.”

Then Mueller, in the same procedural step-by-step tone of a legal indictment, went on to deliver one of the most important sentences of his tenure as special counsel: “The constitution requires a process other than the criminal justice system to formally accuse a sitting president of wrongdoing.”

Mueller could not have been clearer about impeachment …

“This is not about politics, this is about principle. This is about what kind of a democracy we have.”

Sen. Elizabeth Warren (D-MA) continued to push for the impeachment of President Donald Trump at a CNN town hall on Monday night, telling her more cautious colleagues that they cannot avoid the issue because it is politically inconvenient.

“There is no political inconvenience exception to the Constitution,” Warren said, later adding: “This is not about politics, this is about principle. This is about what kind of a democracy we have.”

In her answer, Warren outlined her three main conclusions from special counsel Robert Mueller’s report on the Trump campaign and administration and Russian election interference.

“The first is that a hostile foreign government attacked our 2016 election in order to help Donald Trump,” Warren said. “The evidence is just there. Read it, footnote after footnote, page after page documentation. Part two, Donald Trump welcomed that help.”

Her third major conclusion, she said: “When the federal government starts to investigate part one and part two, Donald Trump took repeated steps aggressively to try to halt the investigation.” …

Can ‘Private Dithering Dem’ Save Himself?

An activist friend recently sent along a clip from the movie “Saving Private Ryan” that she said reminded her of the Democratic party’s dithering, head scratching confusion of how to confront the rapidly escalating Trump/republican national threat.

She wrote: “The scene that comes to mind when I think of national dems is the journalist soldier in Saving Private Ryan who cowers in the stairway while a Nazi is slowly pressing a knife into the chest of his comrade.”

BTW, an online note with the clip says: “The German is saying ‘shut up, let it happen it will be easier’ to him[,] in case anyone was wondering.”

(Commoner Call cartoons by Mark L. Taylor, 2017,  2019. Open source and free for non-derivative use with link to www.thecommonercall.org )