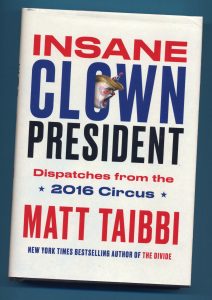 “The arc of the sort of failure of our business has really steepened in the last year or so. As news consumers people should pay more and more attention to independent media and alternative media, and worry more and more about the commercial media going forward.”

Now well into Year III of the deadly serious non-stop, mind and soul-numbing Donald Trump National Freakshow it is hard to recall just how stunning his 2016 victory was. Right up to election eve every one was sure Hillary Clinton would wipe Trump off the map.

The polls showed Clinton ahead comfortably by double digits. Beltway media pundits, campaign consultants, and most every politician on both sides predicted Trump’s defeat. The occasional talk show commentator who dared to suggest the media mob was underestimating Trump’s possibilities was laughed off the sets of every news network and sent packing: “Really, you have got to be kidding, the American people are not going to fall for such a buffoon.”

Nobody of any stature in the media or political stratosphere thought Trump would win … until he did.

Hell, even Trump and his campaign staff didn’t think he would win and he hadn’t even bothered to write an election night acceptance speech.

The first piece of political analysis I read that provided any kind of meaningful mega explanation of what had just occurred was Rolling Stone political writer Matt Taibbi’s “Insane Clown President: Dispatches From The 2016 Election.” Taibbi is the first to admit he was as stunned by Trump’s head-spinning win as anyone else, though in the months of covering the campaign he had had some uneasy moments when he sensed something could happen. That something was happening. But, really: “President Trump? No way.”

It was impossible until — POOF! — it wasn’t.

As Taibbi went back through his stories and campaign notes and reviewed the overall media coverage with the 20/20 hindsight of the election results he began to see how the nation had so unbelievably faceplanted. He also shows the failure of the mainstream corporate media and how they were expertly played by Trump with the networks dishing out at least $2 billion in free media exposure while other candidates would get short shrift or be bumped from coverage to give viewers 30 minutes of live coverage of staring at an empty Trump podium out in Nebraska or some place.

From one day to the next reporters and editors scrambled after Trump insults and his never-ending verbal vomit train of ignorant faux pas pronouncements like feral dogs chasing a rabid squirrel.

Even now, several years down the gutter from 2016, Insane Clown President remains a good and prescient read … a hint of what is to come in 2020. The recent manipulated video of House Speaker Nancy Pelosi, for example, is just one small rotted hors d’oeuvre from the swill trough of republican and fascist Christo rightwing, dark money electoral manipulations to come.

It is safe to say, we haven’t seen anything, yet.

In 2017 Taibbi gave a talk at the Sanctuary for Independent Media on his book and his observations, assessment and warnings to be drawn from the 2016 election. With the 2020 election underway and no reason to believe that:

A) Trump will not win; or failing that;

B) He will politely and graciously deign to leave office if defeated.

We have been told so many times before that whatever election we were facing was “the most important election of our time.” Well — guess what — this time, that really is true.  This well could be the last election we see for some time.  Understanding what happened in 2016 is essential to preparing for what is to come in 2020. The following video is just such a summation and warning and well worth the time.

“America is ceasing to be a nation, and turning into a giant television show.”