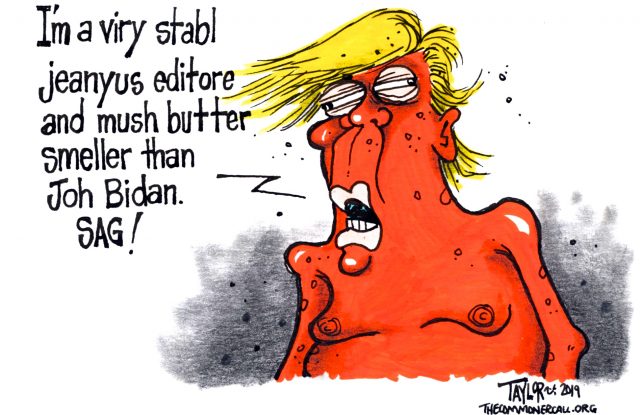 In an unprecedented move that journalists and press freedom defenders denounced as “the most significant and terrifying threat to the First Amendment in the 21st century,” the Trump Justice Department announced Thursday that a federal grand jury charged WikiLeaks founder Julian Assange with 17 new counts of violating the Espionage Act.

“This is about attacking journalism and the public’s right to information about war crimes done in their name with their dollars,” The Intercept‘s Jeremy Scahill said in a series of tweets. “This is about retaliation for publishing evidence of U.S. war crimes and other crimes by the most powerful nation on Earth. It’s a threat to press freedom. That’s why you should care.”

Ben Wizner, director of the ACLU’s Speech, Privacy, and Technology Project, explainedin a statement what sets these charges apart from past U.S. government legal actions targeting journalists and publishers.

“For the first time in the history of our country, the government has brought criminal charges against a publisher for the publication of truthful information,” Wizner said. “This is an extraordinary escalation of the Trump administration’s attacks on journalism, and a direct assault on the First Amendment.”

Whistleblower Edward Snowden, in a tweet, warned of the broader implications: “The Department of Justice just declared war—not on WikiLeaks, but on journalism itself. This is no longer about Julian Assange: This case will decide the future of media.”

In response to the charges, Trevor Timm, executive director of the U.S-based Freedom of the Press Foundation, warned in a statement that “the Trump administration is moving to explicitly criminalize national security journalism, and if this prosecution proceeds, dozens of reporters at the New York Times, Washington Post, and elsewhere would also be in danger.”

“The ability of the press to publish facts the government would prefer remain secret is both critical to an informed public and a fundamental right,” Timm added. “This decision by the Justice Department is a massive and unprecedented escalation in Trump’s war on journalism.”

According to the ACLU’s Wizner, “It establishes a dangerous precedent that can be used to target all news organizations that hold the government accountable by publishing its secrets. And it is equally dangerous for U.S. journalists who uncover the secrets of other nations. If the U.S. can prosecute a foreign publisher for violating our secrecy laws, there’s nothing preventing China, or Russia, from doing the same.”

The Trump DOJ on Thursday detailed some of the new charges against the 47-year-old journalist and publisher in a lengthy statement, which said in part:

Though Manning’s 35-year prison sentence for espionage was commuted two years ago by former President Barack Obama, as Common Dreams reported last week, a federal judge ordered Manning “back to jail for refusing to testify before a secretive grand jury and imposed a $500 fine for every day she is in custody after 30 days.”

The superseding indictment comes as Australia-born Assange is already fighting extradition to the United States from the United Kingdom over a previous hacking-related charge. He is also currently serving a 50-week sentence in a U.K. prison for violating bail when he took refuge in the Ecuadorian Embassy in London seven years ago to avoid extradition to Sweden over sexual assault allegations—expressing concern that Swedish authorities would ultimately turn him over to the United States.

Sweden dropped its extradition request in early 2018, but Swedish authorities reopened the investigation earlier this month. That followed the U.K. police forcibly removing Assange from the Ecuadorian Embassy last month, after the country’s government revoked his asylum protections—which critics also called an assault on journalism.

Link to Story and Video Clips

This is a war on the information citizens need and have a right to  & a precedent-setting moment.

By the time President Barack Obama left office, his Justice Department had indicted eight journalistic sources under the Espionage Act, more than all U.S. presidents before him combined. Among these cases was U.S. Army whistleblower Chelsea Manning, former CIA officer Jeffrey Sterling, National Security Agency whistleblower Thomas Drake, and NSA whistleblower Edward Snowden. In some of these cases, people were sentenced to lengthy prison terms. In others, the government ruined the lives of the targets.

We are at an extremely dangerous moment in the history of this country. Donald Trump is using the same rhetoric used by Nazi officials in the 1930s and ’40s to attack the press. He has said he wants to jail journalists who publish stories he doesn’t like. And he is wielding the Espionage Act like a chainsaw against journalistic sources.

What makes it all so much worse is that it was the constitutional law scholar and Trump predecessor, Barack Obama, who teed Trump up, who laid the groundwork, who blazed the trail for this extremely deranged and dangerous man currently occupying 1600 Pennsylvania Avenue.

But look at the way these stories are covered in the broader media. With a few notable exceptions, the lack of solidarity or just basic understanding of how dangerous these cases are is just largely absent. Instead, there are attacks on the news organizations or reporters. For all of the talk of how dangerous Trump is to a free press, why hasn’t the Reality Winner case been covered more extensively? Why is a CNN reporter losing credentials a national scandal and threatening alleged whistleblowers with 50 years in prison is a nonstory?

This is about criminalizing journalism. It is about increasing the secrecy and decreasing the transparency. It is an assault on the very idea of a democratic society. At these moments, silence is complicity.

This is a precedent-setting moment, not just legally, but morally. Because this is not the end. This is the beginning, and they will eventually come for other news organizations. Or they will scare news organizations from doing high stakes national security reporting.

It doesn’t matter what you think of any of these individual whistleblowers. But it does matter that we all recognize that this is an attack on our basic rights to information about what the U.S. government does in our names and with our tax dollars. It matters that people who blow the whistle on crimes and war crimes be defended and not abandoned or portrayed as violent criminals or traitors. All of us must ask ourselves where we stand. History will remember our answers.