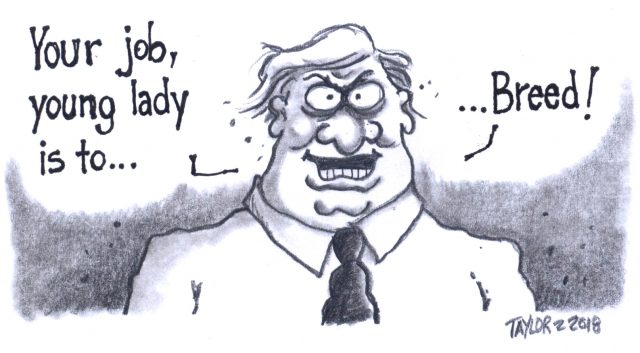 WASHINGTON — In the days since Alabama’s passage of the most restrictive abortion law in the nation, national Republicans have tried to distance themselves from its most controversial provisions that would outlaw abortion even in the case of rape or incest.

Now, there are clear signs that is changing. Secret talking points obtained by VICE News show national Republicans are preparing to defend the law, which has not yet taken effect, but will almost certainly be struck down by the courts. The law, which only allows abortions if a pregnancy poses a “serious health risk” to the mother, was passed last week by Alabama legislators in hopes of mounting a Supreme Court challenge to Roe v. Wade.

According to the document distributed by the largest GOP ideological conservative caucus in the House, conservative leaders are urging members to defend the Alabama law, using the justification that an abortion would be committing more violence against a woman who was raped or survived incest.

“Committing a second violent act with abortion to a woman who has already been victimized by an act of rape or incest could physically or psychologically wound her further,” the document states. “Every single child should be afforded the opportunity to live, regardless of how they were conceived.”

The document was produced by the Republican Study Committee, a longtime caucus consisting of conservative House Republicans, who met Tuesday to discuss this and other matters. Entitled “Messaging in the Minority,” the document offers “messaging guidance” on “our pro-life platform” and contains a note stating it is “strictly OFF-THE-RECORD” and not to be printed or reproduced by/for media.” …

Video: What It’s Like At An Alabama Clinic Still Providing Care To Women In Need

“I’m a single mom of three kids. I have nothing to offer this child.”

The day after Alabama Gov. Kay Ivey, a Republican, signed a bill that put her state on the path to banning almost all abortions, a 20-year-old woman from Tennessee walked into an abortion clinic with an ex-boyfriend and underwent the procedure.

“I’m a single mom of three kids,” said the woman, who asked to remain anonymous, after having an abortion. “I have nothing to offer this child. You know, like, I’m already spread thin. I have my other three to take care of.”

She was one of about 20 women who had the procedure that day at the Alabama Women’s Center. Because there, it was business as usual. The ban — which is certain to be challenged in court — won’t go into effect for several months. Meanwhile, abortion is still legal in the state.

Dalton Johnson co-founded the Alabama Women’s Center in 2001, and since then, the center has had to adapt and sue over multiple new laws and ordinances designed to shut its doors.

“It’s been one thing after another. You know, I kind of feel almost at home in the federal courthouse,” Johnson said. “It’s been admitting privileges. It’s been the zoning.” “The anti-choice group sued the City of Huntsville for issuing my business license, and so that was a whole battle that we had to fight and pay for out of pocket. And, of course, we prevailed in that one. The building codes,” she added. “And probably some more I just can’t even think of.”

So for Johnson, the latest law isn’t much of a surprise. But that doesn’t mean it wasn’t emotionally affecting the staff at the clinic, as they answered phones and cared for patients.

“As I was leaving the house this morning, I started to feel like these butterflies in my stomach. The fear was coming over me,” said Makeda Harris, the center’s receptionist. Most days, she’s the first face a patient would see at the clinic.

Outside the clinic, protesters line up every day holding signs and imploring the women who walk inside to choose life. Many of them are regulars, and the staff knows them by name. A mother and daughter prayed outside Thursday after one woman, shielded by the bright umbrellas of the escorts who volunteer in the parking lot, walked in.

“A civil war is coming to America, only this time, it will be abortion, rather than slavery, that divides the nation.”

Prominent figures on the Christian right in the US ranging from religious magazines to authors to elected politicians have warned that the fight over abortion rights could lead to a new civil war.

Though such dire predictions are not necessarily new on the extreme right wing in the US, the passing of a wave of hardline anti-abortion laws in numerous states this year appears to have amped up the conspiracy-minded predictions that depict abortion squarely as a root cause of a coming conflict.

“We are already in the first stages of the Second American Revolutionary/Civil War. In the dream, I saw that we had already crossed that line and it is now upon us, so we must change our strategy from trying to avoid it to winning it.”

Republican lawmakers such as Ohio’s Candice Keller have openly speculated that the divide over abortion rights might lead to civil war. Last month, Keller drew explicit comparisons with the antebellum situation over slavery, telling the Guardian: “Whether this ever leads to a tragedy, like it did before with our civil war, I can’t say.”

Earlier this month, the Guardian revealed that the Washington state republican legislator Matt Shea had also speculated about civil war, and the “Balkanization” of America, predicting that Christians would retreat to “zones of freedom” such as the inland Pacific north-west, where Shea is campaigning for a new state to break away from Washington.

Asked on a podcast if the two halves of the country could remain together, Shea said: “I don’t think we can, again, because you have half that want to follow the Lord and righteousness and half that don’t, and I don’t know how that can stand.” …