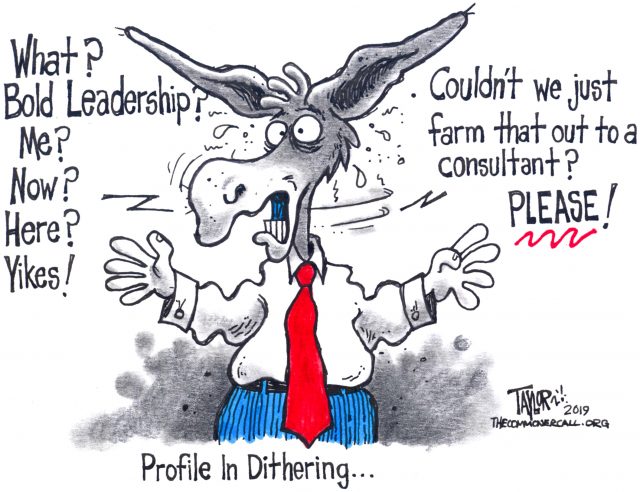 Former Republican Congressman David Jolly of Florida explained how he viewed the developments.

“All they’re doing is vacillating and prevaricating and mollifying — they’re stalling for time because they are afraid of what will happen if they lead.”

MSNBC national affairs analyst John Heileman said Democrats are “losing” on both the politics and morality of impeachment.

“There’s not a Democrat, I believe — not one — who doesn’t believe the president hasn’t committed impeachable offenses on the basis of the Mueller report,” Heilemann argued. “Not one.”

“Democrats basically say, ‘Well, the president is a bad guy, may have broken the law, the president has maybe has committed impeachable offenses but we have to get to the bottom, maybe we should impeach, maybe later we shall impeach.’ The president says ‘No collusion, no obstruction.’ He’s winning the argument because he’s strong and wrong, but he’s strong and clear,” he continued.

Get the ball rolling

“Democrats are all over the place. I have heard maybe more than a dozen Democrats say, ‘I believe the president has committed impeachable acts but we need to investigate it further’ — what? Y’all think the president broke the law … go and get the impeachment ball rolling.”

“Even if there’s political risk, strong and wrong beats weak and right,” he noted.

“If you think that guys, it’s time to go,” he concluded. “Or stand up and go ‘we’re too weak and sad and too afraid to do this’ and then shut up about it. But the middle ground place they are now is not a winning position politically and it’s not the right place for them to be morally in terms of how history is going to judge them.”

WASHINGTON ― House Speaker Nancy Pelosi (D-Calif.) and other Democratic leaders assembled a closed-door, caucus-wide meeting Wednesday to attempt to convince Democrats that they don’t need to open an impeachment inquiry, and that their current approach to handling the Trump administration is already working.

“It was pretty orchestrated, which is what you’d expect,” Rep. Steve Cohen (D-Tenn.) said of the presentation meant to pump the brakes on an impeachment inquiry.

Many Democrats are hesitant to move forward with impeachment, and the ones who do want to open an inquiry are being thwarted by Pelosi and her allies at every turn.

“And the other argument, which I think made a lot of sense, is that time is on their side,” Cohen continued, referring to the Trump administration. “And it’s not just a song.”

Pelosi didn’t say anything against starting impeachment proceedings, according to several members. But with more Democrats ― and even one Republican ― calling for starting an impeachment inquiry, and Pelosi championing the status quo approach, the implication was clear: Don’t do it. …