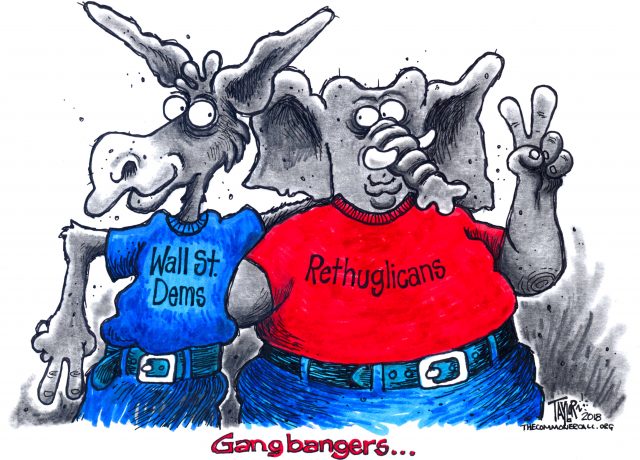 After campaigning against the flagrant, unparalleled corruption of the Trump administration in 2018, the new House Democratic majority started 2019 by offering up a dose of milder, bipartisan corruption. It might be progress, but it isn’t pretty.

For most people, filing taxes is supposed to be free and easy. Instead, the vast majority of Americans pay a fee to a private tax preparer each year. We owe this annual ripoff to one of the most celebrated and misunderstood practices in American politics: bipartisanship.

Despite all the talk about widening political divides, Congress has approved thousands and thousands of pages of bipartisan legislation over the past decade ― everything from patent reform to Pentagon budgets to bank deregulation. We don’t remember these bipartisan bills as significant achievements for a simple reason. Most of them are terrible legislation, throwing money at corporate interests, often to subvert a genuine public interest.

Last month, in a fit of bipartisan comity, the House of Representatives passed a bill that would solidify corporate America’s control over online tax filing ― an arrangement already rated by an independent watchdog as one of the IRS’s “most serious problems.” But the handout didn’t just materialize out of nowhere. Lawmakers were trying to undo a different bipartisan giveaway from the Obama years ― a government-backed bonanza for debt collection agencies that targeted the poor. With their recent legislative push, Democrats and Republicans were setting aside their differences, screwing the poor in order to stop screwing the poor.

While you can’t tell from the official record ― nobody voted against the IRS bill ― the unexpected furor surrounding the legislation has left several Democrats on Capitol Hill privately fuming, setting off an intraparty spat that tells us a lot about how the new House Democratic majority plans to govern ― or misgovern ― with their Republican colleagues.

The drama began all the way back in 2015, when everyone from President Barack Obama to the U.S. Chamber of Commerce wanted Congress to approve more infrastructure funding for roads and bridges. …

What Tulsi Gabbard Was Told Her First Day in Congress