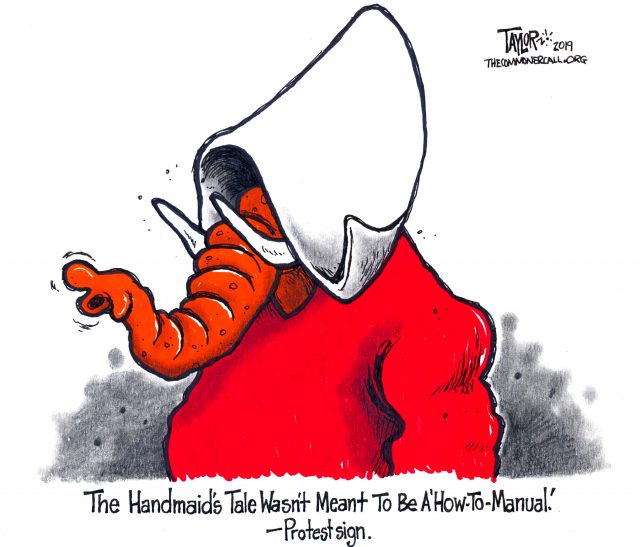 Supreme Court Justice Stephen Breyer issued what many considered a dire warning from the bench this week, implying that Roe v. Wade — the landmark ruling that recognizes the constitutional right to an abortion — is in danger. He wrote the comments in a dissent for an unrelated case in which the court voted to overturn a 40 year-old precedent. Breyer wrote “Today’s decision can only cause one to wonder which cases the Court will overrule next.”

We speak to journalist Robin Marty about what a post-Roe America would look like, and how many people are already cut off from abortion access across the country.

For Porter, this new law is still not tough enough.

anet Porter is a woman who believes life begins at conception and homosexuality is a choice. She has said gay marriage caused Noah’s floods, and was the architect of a 1990s gay conversion campaign. She implied US supreme court justice Ruth Bader Ginsburg, a Jewish woman, is a racist. Like Donald Trump, she was a proponent of the Barack Obama “birther” conspiracy theory.

The Southern Poverty Law Center, a leading civil rights organization, designates her non-profit Faith 2 Action, as a hate group for its work against LGBTQ rights. She lost a slot on a Christian radio network when, the station said, an event she held veered into a form of Christian supremacy.

Many on the left despise her. But she has enemies on the right, too.

And yet, in Trump’s America, she has just had one of the biggest victories of her career.

Janet Porter won a major victory when the strictest law in the US passed in Ohio – the latest step in a fight she is taking global.

Porter successfully lobbied Ohio’s legislature to pass one of the strictest abortion bans in the world this month, a “heartbeat bill”, which would make the procedure illegal at about six weeks into gestation. And for Porter, Ohio is the latest step in a fight she is taking global.

For nine years Porter lobbied on the fringes of the abortion debate. The six-week ban was not supported by mainstream anti-abortion groups, such as Ohio Right to Life. It was vetoed twice by a Republican governor, who argued it would contradict settled law on abortion. The bill, and often Porter herself, were considered too extreme.

But with two recently appointed supreme court justices nominated by Donald Trump and a growing number of anti-abortion federal judges, Porter’s law has now been introduced in 11 states and passed by legislatures in four more, as conservatives seek to mount a frontal challenge to Roe v Wade, the 1973 court decision which legalized abortion across America. …

Amid Wave Of Anti-Choice Laws Across US, Warren Introduces Plan To Protect Abortion Rights

Two days after Alabama Gov. Kay Ivey signed into law a ban on almost all abortions in the state, and with the Republican-controlled Missouri legislature poised to pass its own regressive law, Sen. Elizabeth Warren called on the U.S. Congress to step in and pass federal laws to prevent further erosion of their reproductive rights.

Detailing her latest plan since she announced her presidential run in January, the Massachusetts Democrat called on lawmakers to block a potential overturning of Roe v. Wade by removing states’ rights to legislate which medical procedures are and aren’t permitted in each state.

Denouncing extremists for throwing women’s rights and the country into a “dark moment,” Warren wrote in a Medium post and on Twitter that advocates, especially those in Congress, must fight against the GOP’s anti-choice agenda.

“People are scared and angry,” Warren wrote. “And they are right to be. But this isn’t a moment to back down — it’s time to fight back.”

Under Warren’s plan, Congress would pass laws that prohibit states from passing their own measures blocking people from accessing certain medical procedures and medical providers from performing specific procedures, including abortions.

“Under the Supremacy Clause of our Constitution, federal law preempts state law,” Warren wrote. “And because these federal protections would be valid on a variety of constitutional grounds — including equal protection and the commerce clause — they would ensure that choice would remain the law of the land even if the Supreme Court overturns Roe.”

Warren wrote that Congress should also pass laws preemptively blocking Targeted Regulations on Abortion Providers, also known as TRAP laws, which impose restrictions on abortion clinics to make it impossible to deliver care, and should repeal the Hyde Amendment, which prohibits federal funds from being used for abortion services. The rule keeps abortion care out of reach for many low-income and marginalized women who rely on Medicaid and the Indian Health Service for their healthcare.

The passage of the so-called “Alabama Human Life Protection Act” on Wednesday prompted outrage from women’s rights groups, Democratic lawmakers, and even provoked ultraconservatives including televangelist Pat Robertson and Fox News commentator Tomi Lahren to condemn the law as too extreme.  …

Across the country, we are seeing a new wave of extreme bans on abortion, stripping away reproductive freedom and representing an all-out assault on abortion access. This is Trump’s anti-choice movement… and it’s terrifying, particularly for women of color and low-income women who are most affected by these bans.

We will show up to speak out and fight back against this unconstitutional attempt to gut Roe and punish women. Politicians shouldn’t be making decisions best left to women, their families, and their doctors.

Together we say: Stop the bans. Sign up below to be the first to get updates.

This Tuesday, May 21st at noon local time at statehouses, town squares, and courthouses across the nation–with other events throughout the week–we will show up to speak out and fight back against this unconstitutional attempt to gut Roe and punish women.

Plan an action or RSVP to one near you now. We’ll send you more information on tips to make the most of your event.