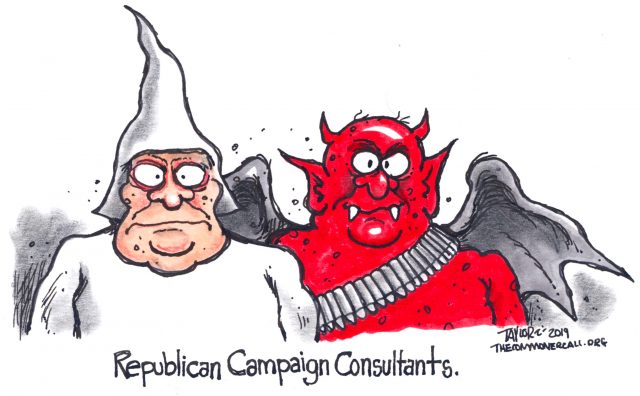 Most likely we are entering the most terrifying and trying time in our nation’s history. We need politicians and activists ready to withstand the whirlwind. The stakes could not be higher.

[Editor’s Note: If you read nothing else from this article check out the last seven paragraphs of this story to learn how Trump could well win 2020. Would the dems be up to handling such developments? Beware and forewarned. — Mark L. Taylor]

So the Mueller Report confirms that the Russians intervened to elect their money launderer of choice.

What else is new?

Putin and company will be back in 2020 on behalf of their wholly-owned asset. They’ll be more powerful and sophisticated than ever, marching in lockstep with their fellow mega-corporations and terminal polluters. A victory would let them complete the fascist assault on what’s left of American democracy.

They’ll also be poised to destroy our ability to survive on this planet. It should be clear to all that the human species will not survive another five years of Trump’s fossil/nuke-crazed attack on our ecological support systems.

And they’ll have two other key allies: Jim Crow, and War.

Rest assured the high-priced Trump-Putin-Koch-corporate-evangelical-polluter operatives are hard at work figuring out how to strip and flip just enough votes to make sure the Electoral College cements American fascism for all time to come.

The debate over how much to focus on “Russiagate” is futile … and misses the point. As outlined by Craig Unger and David Cay Johnston, Trump has been owned by Russian oligarchs for decades. He was bankrupt and in debt by up to $6 billion. Then he was doing mega-deals in cash.

All those rubles came from the rising mafiosi who emerged from the gulag and carved up the corpse of the Soviet Union. In 1999, with the help of the CIA, Putin whipped them into shape. They used Trump to launder their cash into the American banking system and real estate markets. He’s been the Russians’ wholly owned subsidiary for decades.

That they intervened in the 2016 election is beyond obvious. Their net impact is unclear. But they worked in tandem with the usual American mega-billionaires and corporate polluters. Trump paid them back with gargantuan tax benefits, huge subsidies and ecological pork. Along with the evangelical Christians, they’ll be out in force to complete the coup in 2020.

The role for Jim Crow

Their prime ally will be Jim Crow. Key to all Republican presidential “victories” in this century has been the race-based disenfranchisement of citizens of color. Governor Jeb Bush stripped more than 90,000 in Florida 2000. Secretary of State Ken Blackwell stripped more than 300,000 in Ohio 2004. Core operatives stripped untold millions in Michigan, Wisconsin, Pennsylvania and elsewhere in 2016.

Al Gore, John Kerry, and Hillary Clinton have yet to say or do anything about it.

Now Trump is taking the lynch mob to a new level. He’s manipulating the census, injecting a citizenship clause (likely soon to be rubber-stamped by the Supreme Court), demanding ID, and escalating the usual fraud, intimidation, and theft. Come Election Day 2020, millions of suspected anti-Trump voters (mostly of color) will find themselves off the registration rolls all across the nation.

Despite advances in vote counting technology, GOP manipulators will also hold onto touchscreen, scantron, and other voting devices that will allow them to flip the vote count where stripping the voter rolls has not been enough.

Rest assured the high-priced Trump-Putin-Koch-corporate-evangelical-polluter operatives are hard at work figuring out how to strip and flip just enough votes to make sure the Electoral College cements American fascism for all time to come.

They do face a formidable task. Even the redacted Mueller Report fed a substantial plunge in Trump’s ratings, indicating at least some of his base may be cracking. As more of his criminal filth continues to seep out, the nation is likely to turn even harder against him.

The hopeful Sandernista transition of the Democrat party from its corporate death grip to a more progressive reality complicates things. And thanks to Stacey Abrams, the issue of stolen elections is finally on the table. In addition to real social and ecological progressivism, the candidates who take most seriously the issues of election protection are the ones who must be most strongly supported.

But then there’s the Kill Factor: WAR. When presidential advisor Karl Rove realized in 2003 that George W. Bush was about to lose re-election, he did the obvious thing: he went full military. The attack on Iraq was never about 9/11 or terrorism … it was always about making the very unpopular W. a war president.

It worked. John Kerry and the mainstream Democrats rolled over. To this day, they’ve said nothing about the theft of Ohio 2004. And some still defend their support of a worthless, useless, trumped-up slaughter that killed millions and cost trillions.

Never doubt that Trump is about to do the same. Be it Venezuela or Iran, Korea or Grand Fenwick, rest assured GOP operatives are hard at work mapping the target, scope, and timing for the coming conflagration.

Count on it coming on the heels of a “terror attack.” And remember that the Sedition and Espionage Acts are still on the books.

In the 1790s, John Adams used the Sedition Act to lock up journalistic critics (including Benjamin Franklin’s grandson). Exactly a century ago, the awful Woodrow Wilson used the Espionage Act to imprison the great Socialist Eugene V. Debs. Under cover of a useless, worthless war opposed by most of the American people, Wilson concocted a “Red Scare” to forcibly crush the American Socialist Party, which revered and respected the Bill of Rights far more than our “Democratic” president.

Today, as American Socialism is being reborn, we can expect the same from Trump. As his criminal roots are progressively exposed and his ratings plummet, he will do the Rovian obvious. A “terror attack” will occur. The roundup will begin. The registration rolls will be stripped. The Supreme Court will back him (5-4). The coup will deepen.

Most likely we are entering the most terrifying and trying time in our nation’s history. We need politicians and activists ready to withstand the whirlwind. The stakes could not be higher.