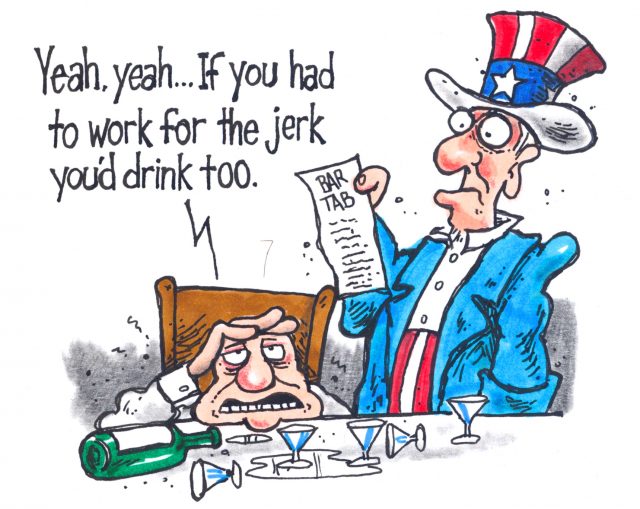 In April 2017, Chinese President Xi Jinping visited Mar-a-Lago, President Donald Trump’s Palm Beach, Florida, estate and club, for a two-day summit. While Xi and his delegation stayed at a nearby hotel, Trump and his advisers stayed at the peach-colored, waterfront resort.

That evening, Trump and a dozen of his closest advisers hosted Xi and the Chinese delegation in an ornate dining room where they ate Dover sole and New York strip steak. Those sorts of lavish, formal gatherings are expected for a major bilateral summit.

But then there are less formal events. At some point later that evening, a group repaired to Mar-a-Lago’s Library Bar, a wood-paneled study with a portrait of Trump in tennis whites (titled “The Visionary”) hanging nearby. The group asked the bartender to leave the room so it “could speak confidentially,” according to an email written by Mar-a-Lago’s catering director, Brooke Watson.

The Secret Service guarded the door, according to the email. The bartender wasn’t allowed to return. And members of the group began pouring themselves drinks. No one paid.

Six days later, on April 13, Mar-a-Lago created a bill for those drinks, tallying $838 worth of alcohol plus a 20% service charge. It covered 54 drinks (making for an average price of $18.62 each) of premium liquor: Chopin vodka, Patron and Don Julio Blanco tequilas and Woodford Reserve bourbon. Watson’s email did not specify how many people consumed the alcohol or who the participants were. (It stated that she was told the participants included then-strategist Steve Bannon and then-deputy chief of staff Joe Hagin. Bannon, who has said he stopped drinking years ago, said he didn’t drink at Mar-a-Lago and didn’t recall the episode. Hagin did not respond to requests for comment.)

The bill was sent to the State Department, which objected to covering it. It was then forwarded to the White House, which paid the tab.

The premium liquor costs are only the beginning of government spending at Mar-a-Lago that emerges in hundreds of pages of receipts and email correspondence between Trump Organization employees and staffers for the State Department, which oversees presidential diplomatic travel and works with the Secret Service and White House. The emails show that the president’s company refused to agree to what was essentially a bulk-purchase agreement with the federal government, and that it charged the maximum allowable federal rate for hotel rooms. The Trump Organization could be obstinate when it came to rates for, say, function rooms at Mar-a-Lago, a problem that was eased when the president signed a law lifting the maximum “micro-purchase” the government can make.

The emails have been released as part of an ongoing lawsuit between the nonprofit Property of the People, a Washington-based transparency group, and the federal government. Property of the People provided the emails and receipts to ProPublica and we, in turn, have added them to our tracker of government spending at Trump-owned properties for our interactive graphic Paying the President.  …