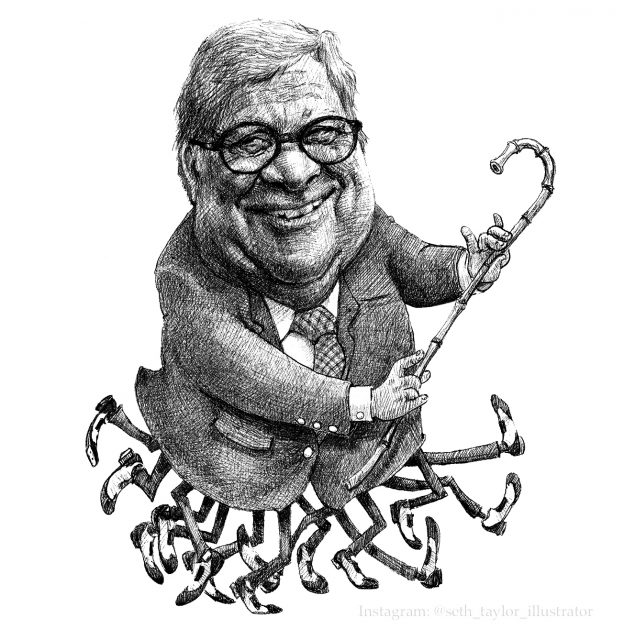 “William Barr is now a blank-eyed, soulless myrmidon in the service of a half-mad, criminal presidency*, and there is no coming back from that. Once, history would remember him as a garden-variety Republican power lawyer who specialized in bailing out Republican presidencies from their own difficulties, like the Iran-Contra scandals. Now, he’s just a hack in a city in which the undergrowth is full of them.”

— Charles P. Pierce, William Barr Is a Flunky in Service to a Crooked Presidency* (5/1/19)

No one is fooled about what’s going on. Barr is scared.

Attorney General William Barr and his fellow Republicans are scared — and they should be. Barr sat before the Senate Judiciary Committee Wednesday to answer questions about special prosecutor Robert Mueller’s investigation into Donald Trump’s possible ties to a Russian conspiracy to undermine American democracy. Suffice it to say, things did not go well for Barr and his entire cover-up campaign.Despite the fact that Republicans tried hard to help him control the committee, Barr came across as a dissembling, waffling sleaze  who has sold out his reputation for integrity and independence to shill for a grifter who betrayed his country. This had less to do with the Democrats’ mastery of asking questions and more to do with the impossibility of Barr’s task, which is orchestrate a cover-up for Trump, a man who oozes the concept of guilt from every sunlamp-baked pore. Of course, there was also the assistance of an anonymous leaker who let the world know, the night before the hearing, how big a liar Barr is when it comes to representing Mueller’s views.So Barr decided that he’d simply skip Thursday’s hearing before the Democratic-controlled House Judiciary Committee, even if that results in images of an empty chair with his name on it being broadcast around the country. Oh sure, there was a complex, nitpicky excuse for why he refused to show up — something, something objections to the format — which ranking member Rep. Doug Collins, R-Ga., gallantly tried to echo by reading the procedural objections into the record with tones of maximized faux outrage. But no one is fooled about what’s going on.Barr is scared. He should be, because Democrats do not seem to be messing around. In private caucus, Speaker of the House Nancy Pelosi reportedly toldher colleagues that they saw Barr “commit a crime” by lying about the nature of his communications with Mueller — a lie that was exposed by Tuesday’s leak and which became the focal point of Wednesday’s hearing.

Barr has put himself in an untenable position, in between risking perjury charges for lying to Congress or risking contempt citations for not showing up at all. For now, he’s betting that the latter path is the less risky one.

For some reason, option No. 3 — resigning and returning to his comfortable retirement, as helpfully suggested on Wednesday by Sen. Mazie Hirono, D-Hawaii — is off the table, even though it would probably make all of Barr’s problems go away.

Perhaps the man whom conservative columnist William Safire described years ago as the “cover-up general” sees working for Trump as the ultimate professional challenge. …

His name will forever be tarnished because of the events of the past month, when the formerly respected attorney and public servant essentially turned into the DC version of a mob lawyer.

We have pointed out before that various crooks, racists, and other shady characters seem to be drawn to President Donald Trump. It makes sense that they would flock to somebody who is like them. What is more stunning, however, is how many formerly respected people allowed their (previously) good names to be ruined by their association with Trump.

Let’s set aside for a minute whether these reputations were well-deserved or not, but time and again, the odious smell of this presidency has stuck to people who used to be highly regarded in Washington and throughout the country.

Being associated with Trump is like hanging out with a skunk. Eventually, it will spray you and it won’t mind the odor but you’ll be left to deal with the stench.

Take Rudy Giuliani, who was beloved as “America’s mayor” after 9/11 before he became a joke as that guy on TV who would defend anything Trump did or said.

Or John Kelly, who was supposed to be one of the “adults in the room” to rein in Trump and, instead, followed his boss into the gutter and was exposed as a liar.

The latest in the long line of formerly respected people whose misguided allegiance to the president will ruin their reputation is Attorney General William Barr.

When facing the decision of whether he wanted to serve justice or Trump, Barr chose to shill for the president …