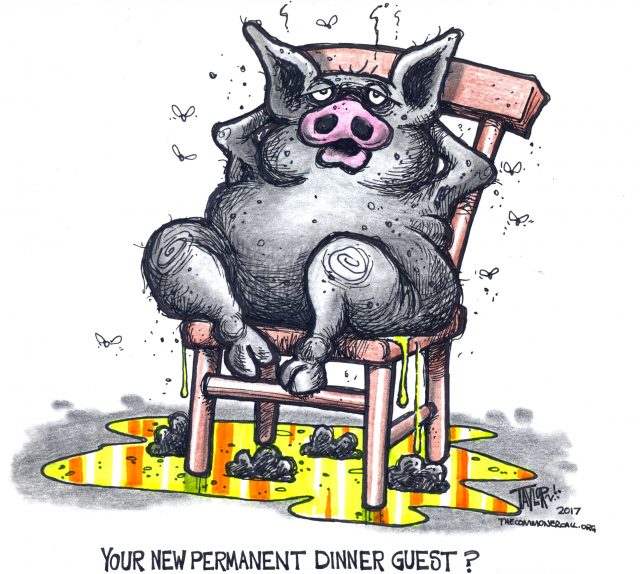 Corporate agriculture is often an overlooked issue for those appealing to the Democratic party base.

[Editor’s Note: When you link to the full article you will find specifics about the growing industrial farming threat in Wisconsin. — Mark L. Taylor]

Donald Trump is banking on riding his hardline stance on immigration to re-election in 2020. Tough talk of a wall makes headlines, but it’s a less discussed issue that could play a deciding role for voters in swing states and early primary states: the influx of factory farms and the devastating impact they have on people’s water, air and way of life. Democratic presidential hopefuls would be smart to clarify their stance on consolidated corporate agriculture, and soon.

In Iowa – site of the first caucus, and a state that went for President Obama twice and then swung soundly to Trump – more than 750 waterways are impaired. The cause? Chemical fertilizers and factory farm manure.

Iowa is home to a little more than 3 million people. It is also home to 26 million hogs, living on over 10,000 factory farms. These hogs produce as much waste as 65 million people. That waste, full of dangerous nitrates, runs into Iowa’s waterways and eventually the drinking water. As a result, the city of Des Moines has the largest nitrate removal system in the world.

Barb Kalbach, fourth-generation family farmer from Adair county, says the path to cleaner Iowa water starts with stopping the expansion of factory farms: “Plain and simple, we need a moratorium on factory farms. We also need tough rules paired with tough enforcement, and we need the big ag polluters that created this mess to pay to clean it up.”

Kalbach, the board president of the grassroots organization Iowa CCI Action Fund, is not alone. There is momentum toward such a moratorium. Twenty-five of Iowa’s 99 counties have already passed resolutions calling for a state moratorium on new concentrated animal feeding operations (Cafos).  …