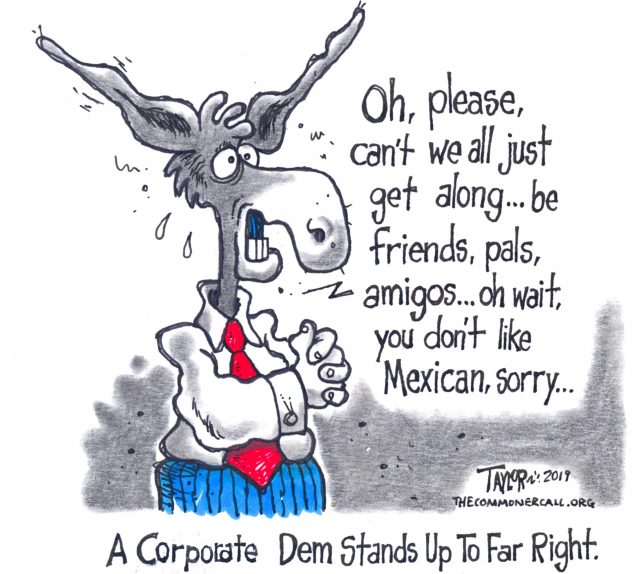 I have a suggestion for PPMB, the right-wing consulting firm whose CEO is running for president–and also Crazy Uncle Joe, who is apparently going to announce his run next week.

You nitwits think you can run on the “I’ll bring everyone together. We’re not blue states or red states– we’re the UNITED states” message?

Good luck with that. The Rock has been trying to do that for nearly three months. He’s getting crushed.

“Right now what this country needs is not people having a race to the gutter, not a party that’s going to show the worst of who they are, not when they go low we go lower, not fighting fire with fire,” he said.

NOBODY calls themselves a socialist in order to win elections. So anyone who says it must be saying exactly what he thinks. Which, right now, is catnip to voters.

What voters are looking for is someone who lives by the rules Sean Connery lays down in THE UNTOUCHABLES.

After eight years watching Bill Clinton hand Republicans what they wanted most (shredding regulations and the safety net) and then watching Barack Obama roll over on his back and expose his tummy– hoping Republicans would scratch it– nobody is in the mood for saying “We’re all in this together.”

As H.L. Mencken put it, “Every normal man must be tempted, at times, to spit on his hands, hoist the black flag, and begin slitting throats.” The 2020 election cycle appears to be such a time

Where’s the common ground with this?

The people in power separate families, put children in cages, and then allow them to be raped. Everyone who follows Team R is supporting that.

Team R supports neo-nazis and white nationalists. They have 100% support from their elected officials and base.

Team R supports people who steal your data and sell it– or just use it against you.

Team R wants to disenfranchise everyone except white male property owners. Again, no exceptions. No one is standing up against them,

People you can’t work with

Talking about how Team R has good and decent people and Team D needs to quit being mean to them– given what Team R has been doing and how Team D has been reacting– won’t win votes.

Democratic primary voters– at least right now– seem to be asking “What, PRECISELY, do you plan to do about our problems?” and “Exactly how hard do you intend to fight for them?” …

Independent-minded journalists have been exhuming what “Lunch Bucket Joe” is eager to keep buried.

Let’s be blunt: As a supposed friend of American workers, Joe Biden is a phony. And now that he’s running for president, Biden’s huge task is to hide his phoniness.

From the outset, with dim prospects from small donors, the Biden campaign is depending on big checks from the rich and corporate elites who greatly appreciate his services rendered. “He must rely heavily, at least at first, upon an old-fashioned network of money bundlers – political insiders, former ambassadors and business executives,” The New York Times reported on Tuesday.

Biden has a media image that exudes down-to-earth caring and advocacy for regular folks. But his actual record is a very different story.

He has what Sanders completely lacks – vast experience as an elected official serving the interests of credit-card companies, big banks, insurance firms, and other parts of the financial services industry.

During the 1970s, in his first Senate term, Biden spouted white backlash rhetoric, used tropes pandering to racism, and teamed up with arch segregationists against measures like busing for school integration. He went on to be a fount of racially charged appeals and “predators on our streets” oratory on the Senate floor as he led the successful effort to pass the now-notorious 1994 crime bill.

A gavel in Biden’s hand repeatedly proved to be dangerous. In 1991, as chair of the Judiciary Committee, Biden prevented key witnesses from testifying to corroborate Anita Hill’s accusations of sexual harassment during the Clarence Thomas confirmation hearings for the Supreme Court. In 2002, as chair of the Foreign Relations Committee, Biden was the Senate’s most crucial supporter of the Iraq invasion.

Meanwhile, for well over four decades – while corporate media preened his image as “Lunch Bucket Joe” fighting for the middle class – Biden continued his assist for strengthening oligarchy as a powerful champion of legalizing corporate plunder on a mind-boggling scale.

Now, Joe Biden has arrived as a presidential candidate to rescue the Democratic Party from Bernie Sanders.

Urgency is in the media air. Last week, The New York Times told readers that “Stop Sanders” Democrats were “agonizing over his momentum.” The story was front-page news. At The Washington Post, a two-sentence headline appeared just above a nice photo of Biden: “Far-Left Policies Will Drive a 2020 Defeat, Centrist Democrats Fear. So They’re Floating Alternatives.”

Biden is the most reliable alternative for corporate America. …