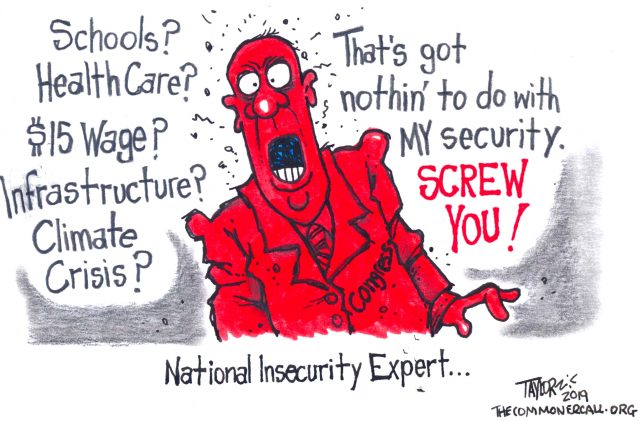 “Very few in Congress are questioning how the U.S. can afford to spend $7.5 trillion on the military.”

Pentagon spending is on track to grow significantly for the fifth consecutive year, but “very few in Congress are questioning” how the U.S. can afford it.

That’s according to the Washington Post‘s Jeff Stein and Aaron Gregg, who reported Thursday that “the United States is expected to spend more on its military in 2020 than at any point since World War II, except for a handful of years at the height of the Iraq War.”

In his 2020 budget request, Trump called for $750 billion in Pentagon spending. Democrats countered with a $733 billion offer, which would still represent a substantial increase over the Pentagon’s 2019 budget.

Either number would bring U.S. military spending to “near-historic highs,” according to the Post.

“Earlier this year, the Congressional Budget Office projected the United States would spend more than $7 trillion on defense over the next decade,” the Post reported, “which is in line with both the White House’s and House Democrats’ budget plans.”

As Stein noted on Twitter, only a few progressive lawmakers are asking how the United States can afford such spending—a question frequently raised about bold progressive policies.

Consumer advocacy group Public Citizen tweeted that the “establishment says we can’t afford” Medicare for All and the Green New Deal, but apparently has “unlimited” funds for the military.

Members of the Congressional Progressive Caucus (CPC) are among the few speaking out against bipartisan efforts to raise military spending.

In response to the Post‘s reporting, the CPC tweeted, “We are spending way, way, way, way too much money on the Pentagon.”

As Common Dreams reported earlier this month, the CPC revolted against House Democratic leaders’ Pentagon spending request and forced the party to cancel a vote on their sweeping 2020 budget measure.

Progressives demanded an increase in domestic social spending in line with the Pentagon’s budget.

“We need to prioritize our communities, not our military spending,” tweeted Rep. Pramila Jayapal (D-Wash.), co-chair of the CPC. “Progressives aren’t backing down from this fight.”

This madness stems from the fact that the Pentagon has a standard operating procedure of simply making up numbers to fill their books—which for normal human beings is termed “fraud.”

But to blow the whistle on a huge organization with a lot of power, likely drawing that power to come crashing down on your head—that takes some serious spine-age. Now, imagine the organization you’re calling out is arguably the largest, most powerful, most secretive and most violent organization on planet Earth. I’m speaking, of course, of the U.S. Department of Defense.

Yet thousands, even tens of thousands, of people have taken that step over the past five years. (More on this in a moment.)

All the while our organized human murder machine continues its work around the world. Every day. Every hour. Never a moment of rest. Never pausing to clip their toenails or scratch their ass. Bombs dropped. Buildings blown up. People killed or imprisoned. No end in sight.

By the way, that’s the term I like to use instead of “military”—Organized Human Murder Machine. …