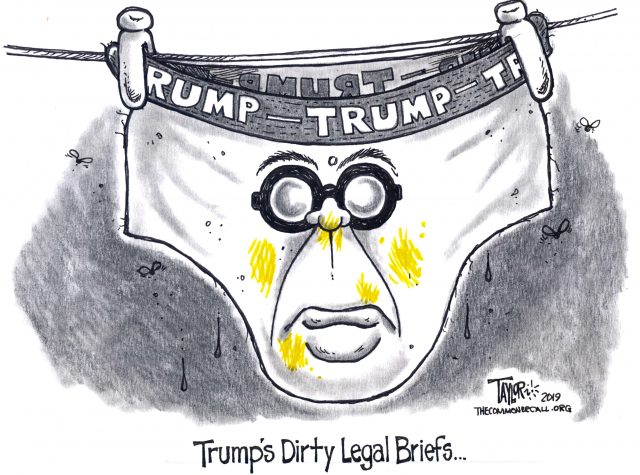 “He’s so much like a Don that his name is literally Don.”

“You gotta do this. You gotta call Rod…”

It was 17 June 2017. Donald Trump was on the phone, urging Don McGahn, the White House counsel, to turn the screw on the deputy attorney general, Rod Rosenstein.

“Call Rod, tell Rod that [Robert] Mueller has conflicts and can’t be the special counsel,” Trump said, in a second call that day. “Mueller has to go … Call me back when you do it.”

If the tone of these secret conversations, revealed in Mueller’s long-awaited report this week, remind you of Tony Soprano – the amoral, brooding, charismatic, philandering, thuggish crime boss in the eponymous TV drama– ordering a hit on one his enemies, you are not alone.

“The demands for loyalty and fealty are like an organised crime network. Instead of the John Gotti family, it’s the Trump family and his solders are the Republican members of Congress who protect him.”

Over 448 pages, Mueller does not present Trump as a traitor but does portray him as a serial liar willing to abuse power, shred norms and bend the rule of law in a White House rotten to the core. Amid this culture of malfeasance and mendacity, trusted lieutenants are expected to demonstrate absolute loyalty, up to and including obstructing justice to save the president’s skin.

“He conducts himself like a New Jersey mob boss who is unconcerned about asking the people around him to conduct unethical or legally challenging behaviour,” said Kurt Bardella, former spokesperson and senior adviser for the House oversight and government reform committee. “Truth and accuracy just don’t factor into his thought process at all.

“The demands for loyalty and fealty are like an organised crime network. Instead of the John Gotti family, it’s the Trump family and his solders are the Republican members of Congress who protect him.”

After two years that transfixed Washington, Mueller’s redacted report outlined 11 episodes in which Trump or his campaign organisation tried to have the special counsel fired, limit the scope of his investigation or interfere in other ways. But it did not recommend charges, nor find a criminal conspiracy with Russia to help Trump win the 2016 election, though it listed plenty of contacts. …

Trump Thought Mueller Would Be ‘the End of My Presidency.’ It Should Be.

This week’s real bombshell was the complete politicization of the U.S. Justice Department, on the level of some tinhorn dictator’s banana republic.

Buried on Page 290 of the long-awaited Mueller report into Russia’s 2016 election interference and questions of collusion and cover-up surrounding President Donald Trump was one of those rare peeks behind the curtain of our insane presidency — exactly why the 440-page report was so highly anticipated for so long.

On May 17, 2017, then-Attorney General Jeff Sessions had to break the news to Trump that his abrupt firing of FBI Director James Comey — who was leading the probe into his election — meant there’d now be a special counsel investigation.

Trump “slumped back in his chair, according to notes by a Sessions aide, and said, ‘Oh my God. This is terrible. This is the end of my Presidency. I’m fucked.’ ”

Mueller has kicked any final verdict on whether America is still a democracy to a Congress more comfortable with focus groups than enforcing the rule of law. In the unforgettable words of the 45th president of the United States, we’re (bleeped).

Now, 23 months later, we finally have most of special counsel Robert Mueller’s reportin our hands — but only after an obsequious and fundamentally dishonest spin campaign from Sessions’ replacement as attorney general, William Barr.

It turns out that Trump’s instincts in 2017 were very, very good. Mueller’s work should mark the beginning of the end of his presidency. Yet that denouement probably won’t happen before the 2020 election — not with politically calculating cowards running both parties in Congress.

But consider the bizarre handling of the Mueller report by Barr, who slowly released the truth like a series of Russian nesting dolls. The AG who once pooh-poohed the Mueller probe then summarized the still-secret report not once but twice to put the president’s bogus “total exoneration” stamp on it, lied about why Mueller didn’t seek criminal charges on obstruction, and then held on to a redacted report for weeks to finally release it just hours before everyday Americans raced home to their Easter hams or Passover Seders where Team Trump was praying you’d forget all about it. …

“Oh my God. This is terrible. This is the end of my presidency. I’m fucked.”

“Before the American people can read it themselves, Barr is trying to spin a report he knows will damage his boss,” tweeted Rep. Barbara Lee during Barr’s morning press conference. “Don’t listen to Barr—read Mueller’s words yourself.”

Though Democrats demanded the full report, the findings delivered to Congress were redacted. During his press conference, Barr insisted that none of the redactions were the result of “executive privilege.”

Link to Story and Report PDF