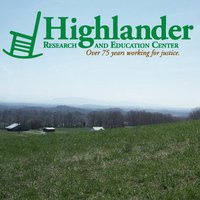 The attackers left their mark on the parking lot by spray-painting a symbol derived from the fascist Romanian Iron Guard during the 1930s that is commonly used by white supremacists.

News of the March 29 arson attack on the Highlander Research and Education Center in New Market, Tennessee, shocked and angered progressives across the country. Fortunately, no one was hurt, but the blaze destroyed Highlander’s main office building, along with valuable organizational records and historic documents that had not been archived at the University of Wisconsin and other repositories. Yet, for the many familiar with its storied history of movement-building, research, radical education, and cultural work, the devastation goes much deeper than property loss. It’s as if a sanctuary was violated.

And violated it was. Making crystal clear their terrorist intention, the attackers left their mark on the parking lot by spray-painting a symbol derived from the fascist Romanian Iron Guard during the 1930s that is commonly used by white supremacists. The same symbol was painted on one of the guns used in the recent murderous attack on two mosques in New Zealand, and scrawled alongside swastikas on the University of Tennessee Knoxville campus in November.

The arson attack on the Highlander Center, a longtime leader in racial and social-justice work, is not merely a hate crime—it’s an act of war.

The attack on Highlander is the latest in a rising wave of racist terror targeting black, brown, and indigenous communities, immigrants, Muslims, Jews, and gender non-conforming folks. For Highlander’s co-executive directors, Ash-Lee Woodard Henderson and the Rev. Allyn Maxfield-Steele, the attack was disheartening, frustrating, and terrifying, but hardly surprising. “Because of our history,” they wrote in a recent press release, “we are not surprised that this space, one where marginalized people working across sectors, geographies, and identities, show up consistently, has been repeatedly targeted over our 87 years of existence.”

The leadership, staff, and many activists associated with Highlander’s ongoing social-justice work understand the attack as not merely a hate crime by misguided individuals but an act of war. Situated on about 200 acres of land just east of Knoxville, Tennessee, Highlander has long been on the front lines of a protracted war on workers, poor farmers, people of color, and other marginalized communities. In a region ravaged by the worst excesses of capitalist and racist exploitation—plant closures, environmental catastrophe from coal mining, dispossession, opioid addiction, state-sanctioned violence—Highlander is one of the few progressive safe spaces where movements connect, dream, and build for the local, national, and global fight back.

Of course, fighting back is in the institution’s DNA. Myles Horton founded the Highlander Folk School in Monteagle, Tennessee, in 1932, amid an escalating class war in the region. A Tennessee native, Horton attended Union Theological Seminary in the late 1920s, where under the tutelage of the legendary social-gospel theologian Reinhold Niebuhr he envisioned creating a radical educational space to advance social justice and democracy in the South. A year at the University of Chicago brought him in contact with social scientists, reformers, and activists, including Jane Addams and W.E.B. Du Bois, who encouraged his vision, and a year in Denmark studying “folk schools” taught him of the value of culture as a tool for education and collective problem solving.

While this is all true, it was Southern workers and their militant allies, especially Communists and Socialists, who came to define Highlander’s trajectory. When Highlander opened, sharecroppers in Alabama were fighting for their lives; miners, steel and textile workers prepared for a massive strike wave; and unemployed councils popped up in cities across the Southeast. Horton was joined by key figures in the resurgent Southern left—Don West, James Dombrowski, Howard Kester, Zilla Hawes, and others with various ties to the Socialist and Communist parties. Indeed, in 1934, Highlander became the site for a united-front agreement between Communists and Socialists to support Southern unionization on the basis of racial and gender equality and to resist fascism, lynching, anti-labor terror, and white supremacy. They critiqued racist and anti-worker New Deal policies—its minimum-wage codes, for example, excluded occupations such as domestic and agricultural work, allowed Southern industries to pay workers less, and left most black workers without any protections, while the Agricultural Adjustment Act, which mandated reductions in cultivation, led to the dispossession of many black sharecroppers and tenant farmers. Highlander became the informal education center for the CIO’s campaign in the South, demanding a labor movement grounded in principles of racial justice and promoting a farmer-labor coalition.

Highlander had always pushed for what we broadly call civil rights, but by 1953 it turned its attention more directly to the black-freedom movement. …

Learn More About Highlander.
We are a catalyst for grassroots organizing and movement building in Appalachia and the South. We work with people fighting for justice, equality and sustainability, supporting their efforts to take collective action to shape their own destiny.
www.highlandercenter.org