The WikiLeaks founder Julian Assange is so disliked in journalism and political circles that many reporters and liberal politicians were publicly cheering on Thursday when the Trump administration released an indictment of Assange, which was related to his interactions with the whistleblower Chelsea Manning in the months leading up to the publication of Pentagon and state department cables in 2010.

Please do not fall for this trap. It is exactly what the Trump administration is hoping for, as the Department of Justice (DoJ) moves forward with its next dangerous step in its war on journalism and press freedom.

Donald Trump has been furious with leakers and the news organizations that publish them ever since he took office.

The larger context surrounding this case is almost as important as the Assange indictment itself. Donald Trump has been furious with leakers and the news organizations that publish them ever since he took office. He complains about it constantly in his Twitter tirades. He has repeatedly directed the justice department to stop leaks, and he even asked former FBI director James Comey if he can put journalists in jail.

The justice department has responded by launching a record number of leak cases and have weighed changing the rules to make it easier to subpoena journalists.

But officials at the justice department aren’t so stupid as to overtly act on the president’s most controversial musings and immediately attempt to prosecute New York Times or Washington Post reporters. Give them more credit than that. If they were to do so, the public backlash would be so overwhelming that, even if their case did not fall apart before trial, a judge would almost certainly put an end to it.

There are other, more methodical ways for the justice department to ultimately get what Trump wants, and the case against Assange is their perfect vehicle. …

Whatever You Think Of Julian Assange, His Extradition To the US Must Be Opposed

For the sake of stopping crimes yet to be committed, this extradition – and the intentionally chilling precedent it sets – must be defeated.

States that commit crimes in foreign lands depend on at least passive acquiescence. This is achieved in a number of ways. One is the “othering” of the victims: the stripping away of their humanity, because if you imagined them to be people like your own children or your neighbours, their suffering and deaths would be intolerable. Another approach is to portray opponents of foreign aggression as traitors, or in league with hostile powers. And another strategy is to cover up the consequences of foreign wars, to ensure that the populace is kept intentionally unaware of the acts committed in their name.

This is what the attempted extradition of Julian Assange to the US is about. Back in 2010, the then US soldier Chelsea Manning downloaded hundreds of thousands of classified documents relating to US-led wars in Iraq and Afghanistan, US state department cables, and inmates imprisoned in Guantanamo Bay. Assange’s alleged role consists of helping Manning crack an encrypted password to gain access to the US defense department computer network.

It is Manning who is the true hero of this story: last month, she was arrested for refusing to testify to a grand jury investigating WikiLeaks, placed in solitary confinement for four weeks, and now remains imprisoned. We must demand her freedom.

These leaks revealed some of the horrors of the post-9/11 wars. One showed a US aircrew laughing after slaughtering a dozen innocent people, including two Iraqi employees of Reuters, after dishonestly alleging to have encountered a firefight. Other files revealed how US-led forces killed hundreds of civilians in Afghanistan, their deaths otherwise airbrushed out of existence. Another cable, which exposed corruption and scandals in the court of Zine al-Abidine Ben Ali, the western-backed then-dictator of Tunisia, helped fuel protests, which toppled him.

Assange does have a case to answer: but it is not this. …

John Pilger: Julian Assange Exposed The Brutal US ‘KILL THEM ALL’ Mentality!

“An assault on citizenship.”

We speak to legendary journalist and film-maker John Pilger who discusses the arrest of Julian Assange after his asylum status was revoked by Lenin Moreno of Ecuador and subsequent removal from the Ecuadorian Embassy. He discusses the importance of Wikileaks’ work, why it is a threat to the United States, the danger the arrest poses to journalists everywhere and the possibility of extradition to the US.

“This is the national security state asserting itself.”

Wikileaks released Manning’s leaked documents and exposed multiple crimes committed by the U.S. government and armed forces – Jay says this is getting lost in the corporate media coverage of Assange’s arrest;  when he was arrested, Assange carried a copy of TRNN’s book “Gore Vidal on the History of the National Security State” which was based on a series of interviews conducted by Paul Jay between 2005 to 2007; the premise of the book is the American state and its loyal media use patriotism to lie to the American people about U.S. foreign policy and militarism.

Assange Arrest Leads To Interest In Book Of Vidal Interviews 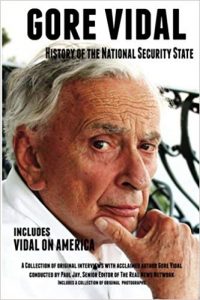 NEW YORK — The arrest of WikiLeaks founder Julian Assange has made a book of interviews with Gore Vidal an unexpected best-seller.

Assange was carrying a copy of “Gore Vidal: History of the National Security State & Vidal on America” when he was arrested Thursday at the Ecuadoran embassy in London.

[From the Amazon Review: In Gore Vidal: History of the National Security State & Vidal on America, TRNN Senior Editor Paul Jay and the acclaimed essayist, screenwriter and novelist Gore Vidal discuss the historical events that led to the establishment of the massive military-industrial-security complex and the political culture that gave us the “Imperial Presidency.”]

By Friday afternoon, the 2014 publication was No. 35 on Amazon.com. “Gore Vidal” features conservations between the author-playwright and Paul Jay, founder of The Real News Network, a nonprofit with a stated mission of “independent, verifiable, fact-based journalism.” …