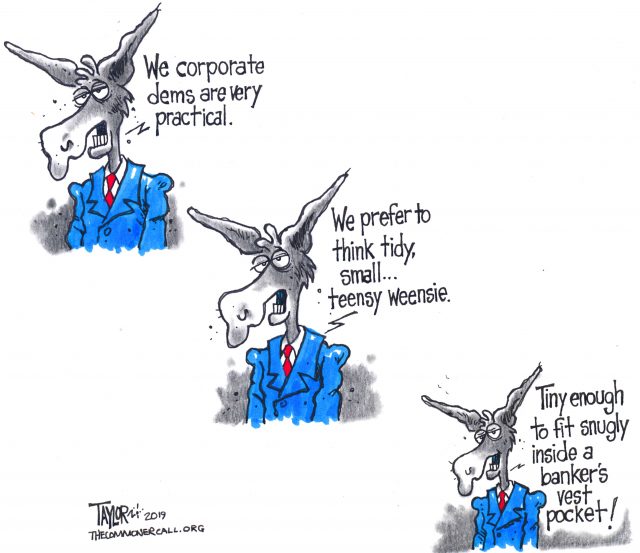 Democratic centrists need to accept that the Donkey’s moving in a new direction now; fighting it by demonizing the left just makes the calamitous prospect of a second Trump term more likely.

Democratic centrists — or you can call them New Democrats or moderates or “pragmatic progressives” or whatever label you choose — have had quite an impressive run in national politics. They have won seven consecutive Democratic presidential nominations (or perhaps eight, depending on how you classify Michael Dukakis), and then went on to win the popular vote in six of those general elections. This stretch of relative success came after Republicans had won five of six presidential elections between 1968 and 1988.

In both 2016 and in the 2018 midterms, there was no electoral bonus for moderation, and all the enthusiasm came from the left, which is also generating the more interesting and inspiring policy ideas. So it’s the left’s turn to take the wheel.

But after 2016, it became clear that the center-left project exemplified by the Clintons (and also pursued by Obama) had reached a point of diminishing returns. Yes, Bill Clinton and Barack Obama held back what at some points seemed to be an irresistible conservative tide led by an increasingly irresponsible and extremist Republican Party. But their positive accomplishments were limited, and were eroded by their Republican successors. Perhaps more importantly, their effort to revive progressivism by marrying it to market mechanisms — in part to secure business and moderate Republican support — never caught the public’s imagination or secured bipartisan support. It instead became a vehicle for deregulation and speculative excesses that helped produce the financial crisis and the Great Recession, a hollowing-out of industries employing the non-college-educated, and the kind of growing income inequality that looked to be waning for a moment in the ’90s. And even when this approach succeeded initially, as with the classic public-private structure of Obamacare, it conspicuously failed to inspire the sort of loyalty commanded by the supposedly archaic and sclerotic public programs of the New Deal and the Great Society.

And then there was 2016 itself, when the political premise of Democratic centrism evaporated in Hillary Clinton’s shocking loss to Donald Trump. All the compromises and temporizing of the Clinton and Obama eras, which deeply dissatisfied more left-bent Democrats, were supposed to “seize the center” and make short work of a bizarre extremist like Trump. Instead, Trump was able to redeploy leftist criticisms of Obama and both Clintons and win Rust Belt states that had not gone Republican in decades. …

The Democratic Party Is Not Going Nuts. It’s Finally Coming To Its Senses.

Is the Democratic Party becoming a mirror image of Donald Trump’s Republican Party? Galloping leftist “extremism” — helped along by the populist rhetoric of Bernie Sanders and Alexandria Ocasio-Cortez — has centrists and conservatives fainting like myotonic goats at a fireworks show, from Dana Milbank at The Washington Post to former George W. Bush speechwriter Peter Wehner at The Atlantic.

However, Wehner’s alarmist article inadvertently demonstrates the problem with this kind of panic-mongering — a lack of real consideration whether Sanders might be right about anything, or whether his politics fit at all with America’s previous traditions. In reality, the growing Sanders tendency in the party mostly reflects it coming to its senses.

Sanders is squarely within the reformist-radical American tradition—someone who wants to build on previous accomplishments to make the United States a more decent and equal society.

“To more fully grasp the leftward lurch of the Democratic Party,” writes Wehner, his glasses steaming up in outrage, he runs through a list of Sanders-style policies. He asserts they would be “fiscally ruinous, invest massive and unwarranted trust in central planners, and weaken America’s security.”

First up is the Green New Deal. After describing it at least somewhat fairly as an effort to de-carbonize the economy as fast as possible while making it more egalitarian, he writes: “It would be astronomically costly and constitute by far the greatest centralization of power in American history.” That’s the sum total of his argument against it.

As usual for self-style moderates, Wehner does not even attempt to grapple with the threat posed by climate change, nor consider how much might be worth paying to stop it. The cost of a Green New Deal would be large, but so would letting half of south Florida drown. Freaking out about cost when facing clockwork costly climate disasters is an elementary failure of reasoning. …