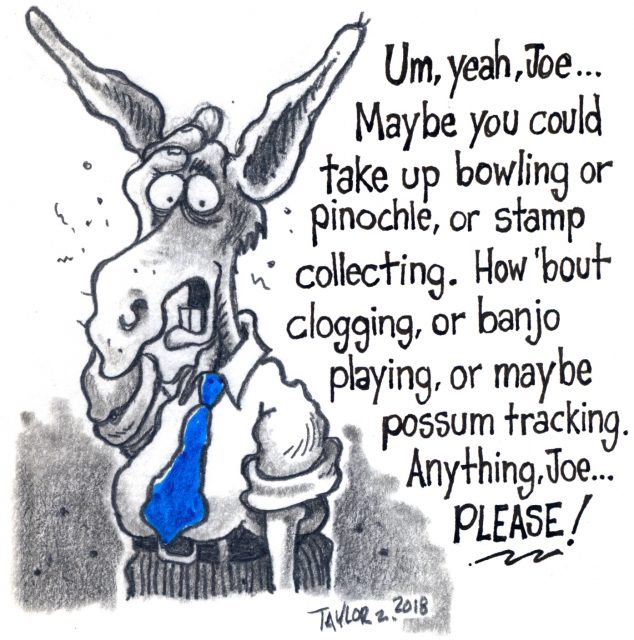 Biden is the Democrats’ answer to the hunger to “make America great again,” dressed up in liberal clothes.

It’s still three months before the first Democratic debate, nearly a year before Super Tuesday, and he hasn’t even declared yet, but poll after presidential poll continues to show 76-year-old former vice-president Joe Biden leading an enormous, diverse, and talented Democratic field.

It’s almost poetically appropriate. Biden carries himself with the confidence of a winner, despite not having won, or even come close to winning, either of the previous presidential primaries he’s entered. He is the guy whose self-assured conviction that his authority will protect him from rebuke has always preceded him into any room, whose confident sense of his own entitlement repels potential objection like Gore-Tex repels rain. He is the gaffe-master, the affable fuck-up, and also, oddly, the politician who’s supposed to make us feel safe. He is the amiable, easygoing, handsy-but-harmless guy who’s never going to give you a hard time about your own handsiness or prejudice, who’s gonna make a folksy argument about enacting fundamentally restrictive policies.

He is the gaffe-master, the affable fuck-up, and also, oddly, the politician who’s supposed to make us feel safe. …who’s gonna make a folksy argument about enacting fundamentally restrictive policies.

For his whole career, Biden’s role has been to comfort the lost, prized, and most fondly imagined Democratic voter, the one who’s like him: that guy in the diner, that guy in Ohio, that guy who’s white and so put off by the changed terms of gendered and racial power in this country that decades ago he fled for the party that was working to roll back the social advancements that had robbed him of his easy hold on power. That guy who believed that the system worked best when it worked for him.

A form of lefty Trumpism

Biden is the Democrats’ answer to the hunger to “make America great again,” dressed up in liberal clothes. The New York Times’ Jamelle Bouie has in fact argued that Biden’s racial politics have offered a form of Trumpism on the left, a “liberal cover to white backlash.” To that I would add, he has provided liberal cover to anti-feminist backlash, the kind of old-fashioned paternalism of powerful men who don’t take women’s claims to their reproductive, professional, or political autonomy particularly seriously, who walk through the world with a casual assurance that men’s access to and authority over women’s bodies is natural. In an attempt to win back That Guy, Joe Biden has himself, so very often, been That Guy.

Now it seems, That Guy is widely viewed as the best and safest candidate to get us out of this perilous and scary political period. But the irony is that so much of what is terrifying and dangerous about this time — the Trump administration, the ever more aggressive erosion of voting and reproductive rights, the crisis in criminal justice and yawning economic chasm between the rich and everyone else — are in fact problems that can in part be laid at the feet of Joe Biden himself, and the guys we’ve regularly been assured are Democrats’ only answer. …

(Commoner Call cartoon by Mark L. Taylor, 2019. Open source and free for non-derivative use with link to ewww/thecommonercall.org )

In ideology, political strategy, and demeanor, Biden represents the Democratic Party of the past.

In most of the polls that have been taken of primary voters, Biden comes in first with around a quarter of the vote, in no small part because he is far more familiar than the other candidates (with the possible exception of Bernie Sanders). But like all the other candidates, his long record in office is being reexamined, particularly those parts that look much more problematic from the perspective of 2019 than they did even in 2008.

There’s his role in writing the harsh 1994 crime bill, his advocacy for banks and credit card companies, his denunciations of busing in the 1970s. And there’s the confirmation hearings for Clarence Thomas’s nomination to the Supreme Court, which Biden oversaw as chair of the Senate Judiciary Committee, when Anita Hill was mocked and abused despite the fact that she was the one telling the truth. Biden now says “I wish I could have done something” to make it less awful for Hill, as though he were some sort of bystander. One thing he could have done was allow the other women who were prepared to corroborate Hill’s account to testify. But he didn’t.

Biden has expressed regret over all that; whether he has done enough is a matter people could disagree about. But now another issue has been raised, one that has been in plain sight for years: Biden’s tendency, when standing next to women, to act as though he has the right to put his hands on their bodies without their permission.

As so often happens, it took one woman speaking out to force everyone else to take seriously what people already knew and joked about. Lucy Flores, who in 2014 was the Democratic nominee for lieutenant governor of Nevada, wrote an essay in New York Magazine about what happened to her when Biden came to do an event for her, and they stood backstage waiting to go on …