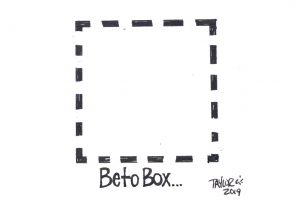 During his time in the House, O’Rourke did not introduce or co-sponsor any sweeping labor legislation.

Indeed, many of the rumblings from O’Rourke’s Michigan visit show voters skeptical of a presidential candidate who is on the cover of Vanity Fair, yet couldn’t beat Ted Cruz in his home state. These voters, largely working-class, aren’t the type to pick up Vanity Fair at their local Meijer store, and appear more interested in finding out whether a candidate will be a strong champion for policies that actually benefit working people.

O’Rourke’s voting record on the whole is far more conservative than the average Democrat, including on issues impacting workers’ rights. These aren’t the only causes for concern about O’Rourke’s record.

When O’Rourke showed up at the Detroit Carpenters Apprenticeship School (a trade school in nearby Ferndale), many union workers didn’t know who he was, despite being told about his visit in advance. When he walked in, entourage in tow, the general response was, “Who’s that?”

“They didn’t recognize him,” says Steve McCool, a floor layer instructor at the trade school and member of the Michigan Regional Council of Carpenters and Millwrights Local 1045.

McCool, however, did say that union members want to see a presidential candidate who will support them, and who will boost trade schools. “I was told to go to college or go to the military,” says McCool. “And I’m not that person. It just wasn’t for me. I’m glad there’s another option. I found this at 24. I wish I would’ve found it earlier.”

Lisa Canada, Political and Legislative Director at Michigan Regional Council of Carpenters and Millwrights, agrees that standing unequivocally on the side of workers’ rights is a critical task of securing union members’ support. “We support candidates who support our values and our issues, including strong apprenticeship programs, safe job sites, prevailing wage, and repealing so-called Right-to-Work laws,” Canada says in a statement to In These Times. “Working families deserve an economy and a government that support their ability to earn a good wage for a hard days’ work, return home safely to their families and retire with dignity. We welcome any candidate to our training centers who wants to learn about what is important to our members and their families.”

For her part, Hussein questions whether O’Rourke has shown the substance of someone who will be that working-class champion. …