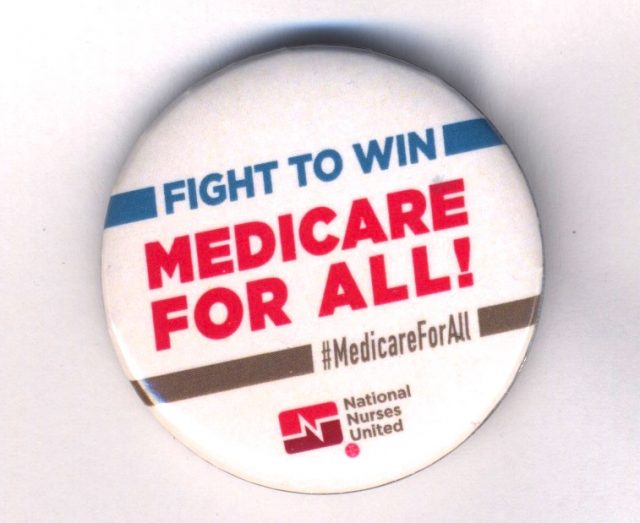 One of the biggest arguments against Medicare for All or single-payer healthcare is that it would disrupt or destroy the current existing system of employer-provided private health insurance. This isn’t a good argument, of course, but it’s one that gets a lot of air time from the shrill handwringing crowd that wants to make sure the profits from private companies are safe.

Kill the insurance companies. Replace them with a federal system. You don’t have to shop on the private market for firefighters when your house burns down, and there’s no reason you should have to when you break a leg.

Case in point, this clip of Bernie Sanders, hoovered up by the “RNC Research” wing, where the Vermont senator and presidential candidate puts it pretty simply: “get rid of the insurance companies.”

Here’s his quote in a bit more context: “You are not going to be able in the long run to have cost effective universal health care unless you change the system, unless you get rid of the insurance companies, unless you stand up to the greed of the drug companies and lower prescription drug costs.” This is largely true!

What Bernie is talking about is a more radical “Medicare for All” plan that doesn’t include the stopgap measure of a “public option,” or a system in which people can keep their private insurance but have a universal public option they can use. Doing away with this system and replacing it with a fully public-funded universal option is really the only way we progress, and the idea is catching on …

(Commoner Call photo open source and free for non-derivative use with link to www.thecommonercall.org )

Get rid of the insurance companies?

“Sen. Bernie Sanders (I-Vt.), who is seeking the Democratic nomination for president in 2020, late Tuesday reiterated his call for the elimination of private health insurance companies and moving to a single-payer, “Medicare for all” system of health care.

“You’re damn right,” Sanders wrote in a tweet in response to a Republican National Committee (RNC) Research tweet pointing out that he called for eliminating private health insurance during an interview earlier in the day.

In that MSNBC interview, Sanders said the “current system is incredibly dysfunctional and wasteful” and said universal health care can’t be achieved “unless you get rid of the insurance companies.”

America’s getting plenty angry about the rising cost of insulin—and no wonder. Between 2002 and 2013, the average price for this life-saving, injectable drug used by nearly 10 million Americans with diabetes has tripled, according to the American Diabetes Association (ADA). “No one who relies on insulin should have to wonder if they’ll be able to afford it,” the ADA asserts in an online petition for its Stand Up for Affordable Insulin campaign.1

The highly anticipated US introduction (in 2016) of the generic “biosimilar insulin” called Basaglar was supposed to put a lower-priced type of insulin on the market but that’s not what happened.

The ADA’s action doesn’t stand alone. In November (2016), Vermont senator and former contender for the Democratic presidential nomination Bernie Sanders fired off a letter calling on the US Justice Department and the Federal Trade Commission asking for an investigation of pharmaceutical makers Eli Lilly, Novo Nordisk and Sanofi for possibly colluding on insulin price increases.2

“Not only have these pharmaceutical companies raised insulin prices significantly—sometimes by double digits overnight—in many instances the prices have apparently increased in tandem,” noted the letter, co-signed by Rep. Elijah Cummings (D-MD). “We have…heard from our constituents that the life-saving insulin they need is increasingly unaffordable,” And in early January 2017, the New York law firm Bernstein Litowitz Berger & Grossmann sued Novo Nordisk on behalf of the Lehigh County (PA) Employees’ Retirement System alleging the company “reported materially false and misleading earnings and forecasts” that were “inflated” by price fixing.