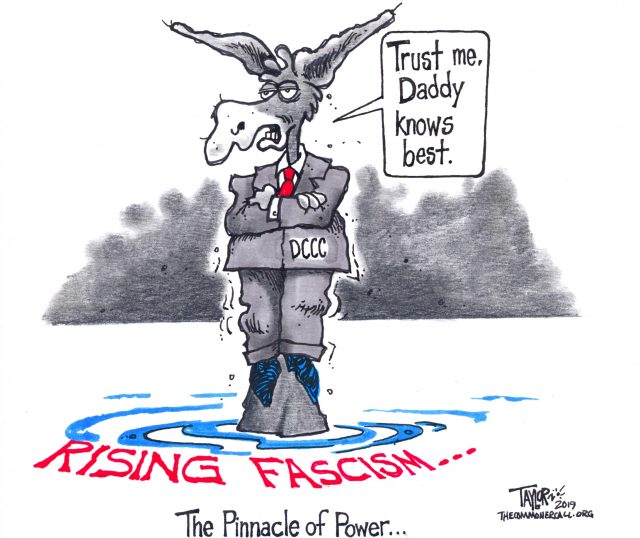 “The party shouldn’t be in the business of protecting Dems in safe blue districts who have lost touch with their constituents.”

Progressives made clear they have no intention of backing down to the party establishment after the Democratic Congressional Campaign Committee on Friday threatened to cut off funds to firms and strategists that support primary challengers against incumbents.

“The DCCC can do anything it wants to try to prevent the next generation of Democrats from taking power. They will not succeed,” Sean McElwee—co-founder of Data for Progress, which is recruiting progressives to oust conservative Democrats—said in a statement.

The new policy was included in the DCCC’s list of vendor hiring standards, which state that the organization “will not conduct business with, nor recommend to any of its targeted campaigns, any consultant that works with an opponent of a sitting member of the House Democratic Caucus.”

“Don’t think for one second that it’ll stop us—or the grassroots army we stand with—from backing bold, inclusive populists who will better represent their districts in Congress over neoliberal corporate Dems.”

According to National Journal, which first reported the policy change, “Democrats involved in crafting the standards intend for them to bolster members across the ideological spectrum, from the fiscally conservative Rep. Henry Cuellar of Texas to the progressive Rep. Ilhan Omar of Minnesota—both of whom could be subject to contested primaries.”

“Make no mistake—they are sending a signal that they are more afraid of Ayanna Pressley and Alexandria Ocasio-Cortez winning primary challenges than Henry Cuellar who votes with Trump nearly 70 percent of the time,” Alexandra Rojas, executive director of Justice Democrats, told The Intercept.

As Common Dreams reported in January, the progressive advocacy group Justice Democrats is recruiting a 2020 primary challenger to take on Cuellar, who has backed anti-abortion legislation and raised money for the GOP.

As National Journal reported, the DCCC’s hiring standards “could cripple would-be primary opponents’ ability to entice top talent to join their staff” and deprive them of millions of dollars in funds.

But progressive organizations and strategists were quick to say they will not be deterred by the DCCC’s threat to cut them off.

“We see exactly what you’re doing DCCC,” declared Democracy for America, an advocacy group that also bolsters progressive candidates. “Don’t think for one second that it’ll stop us—or the grassroots army we stand with—from backing bold, inclusive populists who will better represent their districts in Congress over neoliberal corporate Dems.”

Rebecca Katz, a longtime Democratic consultant, told The Intercept that “people who can’t understand the party is stronger because we have Alexandria Ocasio-Cortez and Ayanna Pressley in Congress should not be in the business of choosing who can run for Congress.”

Katz expanded on that idea on Twitter: “The party shouldn’t be in the business of protecting Dems in safe blue districts who have lost touch with their constituents. I would work with those challengers, and help lift up those voices, even if it means being blacklisted by the DCCC.”

As New York Magazine‘s Eric Levitz noted, “it’s far from clear that the DCCC’s policy will even succeed on its intended [objectives].”

“The small-dollar donor armies that have freed Alexandria Ocasio-Cortez from the burden of fundraising—and filled the coffers of Bernie Sanders’s nascent 2020 campaign—aren’t going anywhere,” Levitz wrote. “The DCCC can’t eliminate the demand for political operatives who are willing to assist left-wing primary challenges.”