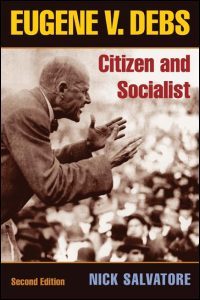 Socialism is in vogue in America. Radical left politics, embodied by the likes of Bernie Sanders and Alexandria Ocasio-Cortez, is gaining traction among millennials who came of age during the Great Recession. And conservatives, in turn, have reverted to using decades-old Red Scare tactics in response.

With the hype around a resurgent American left, it might feel like socialism is a newcomer to political discourse in the United States. But only if you don’t know your US history. Long before Bernie Sanders came along, there was Eugene Debs. It is impossible to understand the appeal of socialism in America today without looking at its past. And that inevitably leads to Debs.

An activist and trade unionist, he was jailed for his role in the 1894 Pullman strike – the nationwide railroad strike that changed the face of US labour laws. His storied life as a socialist was marked by his opposition to large corporations and his role in helping to unionise labour. later, as a member of the Socialist party of America, Debs ran for president five times between 1900 and 1920. A charismatic orator he was jailed, again, in 1918 on grounds of sedition for his speeches denouncing US participation in the first world war. He was sentenced to 10 years in prison.

Sanders has returned repeatedly to Debs’ central message: the need to combat the catastrophically increasing inequality.

Long before the Brooklyn-to-Vermont idealist launched a senatorial career, Bernie Sanders had declared Debs to be his idol. Sanders even made a spoken-word album about the vanished giant. A portrait of Debs, to this day, hangs on Sanders’ office wall.

Like Sanders and Ocasio-Cortez, his platform focused on social inequalities, including income inequality. He also fought for better transportation systems; health and safety regulations; unemployment compensation; the minimum wage; the limiting of so-called military budgets and women’s reproductive rights, including access to birth control. Debs’s also envisioned what he called a “cooperative commonwealth,” in which people would share their work and community life in new ways they would discover for themselves.

His radicalism was a product of both his upbringing but also his time. Debs was born in 1855, the son of Alsatian (that is, French-speaking) immigrants who operated a small grocery store in the thriving railroad town of Terre Haute, Indiana. He was named after two radicals: the radical French writer, Eugene Sue and another radical French writer, Victor Hugo.

“Gene” took a railroad job at 15 and joined a union at the first opportunity. A traveling organizer for the Brotherhood of Locomotive Firemen, he quickly became editor of their magazine.The real turning point in Debs’ life came during the 1890s when he came face to face with the widening inequalities in American society.

In 1893, Debs witnessed the worst economic downturn in US history, accompanied by massive suffering and even starvation. The Depression meanwhile hastened the concentration of wealth and privilege that gave the era its lasting nickname, “the Gilded Age”.  …