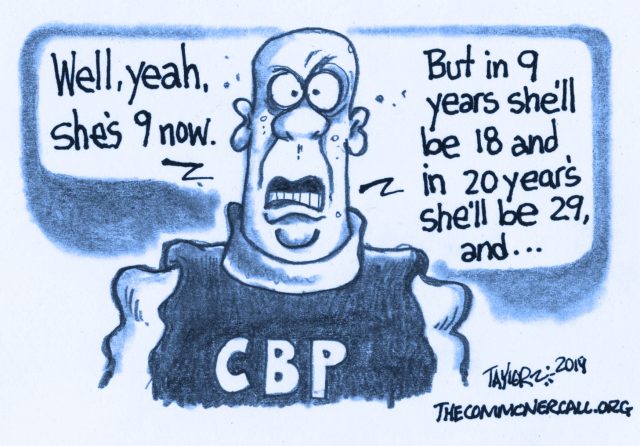 “I was scared. I was completely by myself,” says sobbing fourth-grader.

By Mary Papenfuss
HuffPost (3/23/19)
A 9-year-old American citizen on her way to school was apprehended by U.S. immigration officials and detained for some 32 hours before she was released back to her family. Federal officials said later that the girl, who was carrying a U.S. passport card with her, gave “inconsistent information.”

“I was scared. I didn’t have my mom or my brother. I was completely by myself,” Julia Isabel Amparo Medina told NBC-7 TV in San Diego.

Medina, her 14-year-old brother and two friends were being driven to school by the friends’ mom from their home in Tijuana to San Ysidro last Monday. Thousands of people travel through the Tijuana-San Ysidro crossing daily for school or work.

When traffic slowed to a crawl, the mom told the children to walk across the border so they wouldn’t be late. An official detained Medina, saying she didn’t look like the photo on her passport card.

They finally released her Tuesday evening about 32 hours later. U.S. Customs and Border Protection said in a statement that the girl, whom they confirmed is an American citizen, “provided inconsistent information during her inspection,” which they didn’t elaborate. She was taken into custody so officers could “perform due diligence in confirming her identity and citizenship,” according to the statement.

Officials had no explanation for why the process took 32 hours or why the 9-year-old was in custody the entire time. …

Several dozen immigrant detainees have alleged they were sexually abused in Customs and Border Protection holding facilities. This is the story of two young women who say they were victims.