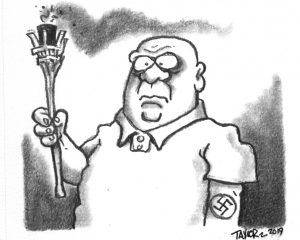 Newly leaked chat logs from the alt-right group Identity Evropa show a continuing dynamic of racism and fascism, despite ongoing attempts to reform their public image following the deadly 2017 ‘Unite the Right’ rally in Charlottesville.

Since the violence in Charlottesville turned much of society against the alt-right, Identity Evropa (IE for short) has changed their strategy, focusing on presenting clean “optics” to the exclusion of most other considerations. The group today tries to present itself as entirely nonviolent, with its public appearances carefully groomed by its young leader, Patrick Casey, a racist propagandist who makes his living producing media for the neo-Nazi YouTube channel Red Ice TV.

(Founded in 2016 by Nathan Damigo, leadership of Identity Evropa passed on leadership to Eliott Kline, who used the alias ‘Eli Mosley’, who was disgraced upon being exposed as lying about his military service record, leaving Casey with the reins.)

Unicorn Riot is releasing more than 770,000 messages from chat servers associated with Identity Evropa. This is the first report in a series about this large US-based neo-Nazi organization.

While Identity Evropa presents itself as “identitarian” and merely “pro-white” without advocating hate for other races, a look behind the curtain lays bare the group’s basis in crudely watered-down National Socialist ideology.

Over 240,000 leaked messages from the main server, shared over the chat platform Discord, have been obtained by Unicorn Riot and published in full as part of our Discord Leaks platform. The leaked chats provide what is to date the most intensive look at the behind-the-scenes workings of Identity Evropa, which is perhaps the most active fascist group in the United States today.

Identity Evropa’s internal communications further cement the evidence that they were closely involved with the deadly Unite The Right neo-Nazi rally in Charlottesville in 2017. Over 70 Discord usernames from Identity Evropa’s national Discord chat server were also present in the leaked planning chat for Unite The Right, including the group’s current ‘CEO’ Patrick Casey, who posts on Discord as ‘Reinhard Wolff‘.

Identity Evropa’s chat logs also show that Florida resident and IE member Erica Alduino, who took a primary organizing role in the Unite The Right planning chats, was sending messages in the IE Discord chat server up until April 2018 and was involved in collecting funds from members. IE leadership and members were also present in other alt-right chats previously leaked by Unicorn Riot, such as ‘Vibrant Diversity‘ which featured memes praising racist mass shooter Dylann Roof, and the ‘Anticom‘ chat in which users shared PDFs of manuals for making explosives.

Leaked chat logs have connected seven current members of the U.S. armed forces to a white nationalist group, according to a HuffPost investigation.

Two Marines, two Army ROTC cadets, an Army physician, a member of the Texas National Guard and one member of the Air Force all belong to an organization called Identity Evropa, which is listed by the Anti-Defamation League and the Southern Poverty Law Center as an extremist group.

For years, Identity Evropa members have used a server on Discord, a group chat app popular among the alt-right, to send messages to one another. Last week the independent media collective Unicorn Riot published the contents of that Discord server in its entirety.

A largely anonymous network of anti-fascist activists reviewed the Discord logs, using biographical details mentioned by Identity Evropa members, most of whom posted under pseudonyms, to uncover their offline identities.

Building off that research, HuffPost verified the identities of seven men currently serving in the military. Their messages on the Discord server indicate that they hold deeply racist and anti-Semitic views and participate in Identity Evropa propaganda campaigns, posting stickers and flyers in cities and on college campuses.

The Marine Corps, the Army, the Air Force and the Texas National Guard confirmed to HuffPost that the identified men were active members in those services. After HuffPost’s inquiries, the military is investigating some of the men’s possible ties to Identity Evropa; some servicemen were already under investigation as a result of previous tips. The military is determining whether they violated rules regarding discrimination and extremist activity.

News of Identity Evropa’s presence in the military comes at a time of heightened awareness of white nationalist violence. …