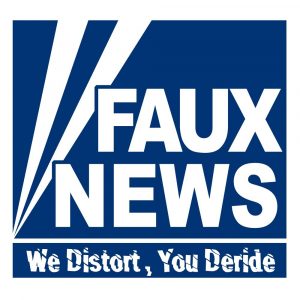 Fox News and the Trump White House: a seamlessly integrated human centipede. Want proof? Look no further than the fact that Bill Shine, current White House communications director and the former president of Fox News, collects checks from both shops. (Shine, who resigned from Fox after the network was rocked by a series of sexual misconduct scandals, is still being paid out the remainder of a $7 million bonus.) Hope Hicks, who preceded Shine in his government gig, now works at his old network’s parent company, 21st Century Fox. In her latest piece for

“It’s even worse than a conspiracy of the dark Web, or something trying to manipulate Fox. It was just a guy in his underwear in Georgia who had influence over Fox News! And Fox News influences the President!”

the New Yorker, investigative reporter Jane Mayer explored the unholy alliance between the network and the Trump administration. It’s a story that explains both how Fox made Trump (by offering him weekly segments on Fox and Friends), and how Trump radicalized Fox (by shamelessly flogging the racist “birther” conspiracy regarded as too fringe by Fox personalities Bill O’Reilly and Glenn Beck).

As Mayer explains, it is difficult to tell where one ends and the other begins. At least three former commenters or contributors to Fox News became cabinet members (Ben Carson, K.T. McFarland and John Bolton), not including former Fox anchor Heather Nauert, who withdrew from consideration as UN ambassador, or former adviser Sebastian Gorka, who frequently appears on the network. But, as Mayer reports, you don’t need to have left Fox to be looped into White House strategy sessions. “Pete Hegseth and Lou Dobbs, hosts on Fox Business, have each been patched into Oval Office meetings, by speakerphone, to offer policy advice,” Mayer writes. “Sean Hannity has told colleagues that he speaks to the President virtually every night, after his show ends, at 10 p.m.”

And then there’s the matter of unverified information being piped into the White House via Fox News broadcasts. …

The Tennessee Star claims to be the “most reliable” online local paper in the site. In fact it’s just a GOP front.

An investigation by the fact-checking outlet Snopes found that several new local news websites are actually being launched by Republican consultants whose company is funded in part by the candidates the sites cover.

Snopes discovered that the trio has since launched similar sites in other battleground states ahead of the 2020 elections: the Ohio Star and the Minnesota Sun.

All three claim to be the “most reliable” local newspapers in their states and provide “unbiased updates on Investigative Reports, Thoughtful Opinion, Sports, Lifestyle.”

But the coverage is hardly by “unbiased journalists.”

Gill, who is listed as the Tennessee Star’s political editor, owns a media consulting firmthat at least one candidate and one political action committee paid before they received positive coverage on the website.

Snopes reported that several of the site’s writers work or have worked for PACs or political campaigns that they cover without disclosing that information. The Tennessee Star’s “investigative journalist,” Chris Butler previously worked for a PAC affiliated with Tennessee Gov. Bill Lee, a Republican. …