In what now seems like ancient history, Buzzfeed published the Steele dossier in January 2017. Controversial at the time and so non-controversial now it brings into focus how much the media has brought forward about Trump-Russia corruption and how Trump and the Russpublicans have protected him from the fallout.

As a reminder, the dossier was a collection of memos compiled by former MI6 Russia Desk head Christopher Steele. It was initially commissioned as opposition research on Trump by a conservative political group. Mother Jones investigative reporter David Corn broke a story a week before the election — appropriately enough on Halloween October 31, 2016 — disclosing some of the dossier claims by Steele, unnamed at the time:

…“It started off as a fairly general inquiry,” says the former spook, who asks not to be identified. But when he dug into Trump, he notes, he came across troubling information indicating connections between Trump and the Russian government. According to his sources, he says, “there was an established exchange of information between the Trump campaign and the Kremlin of mutual benefit.”

“…The former spy says he concluded that the information he had collected on Trump was “sufficiently serious” to share with the FBI.

“…The first memo, based on the former intelligence officer’s conversations with Russian sources, noted, “Russian regime has been cultivating, supporting and assisting TRUMP for at least 5 years. Aim, endorsed by PUTIN, has been to encourage splits and divisions in western alliance.” It maintained that Trump “and his inner circle have accepted a regular flow of intelligence from the Kremlin, including on his Democratic and other political rivals.” It claimed that Russian intelligence had “compromised” Trump during his visits to Moscow and could “blackmail him.”…

“The former intelligence officer says the response from the FBI was “shock and horror.”” 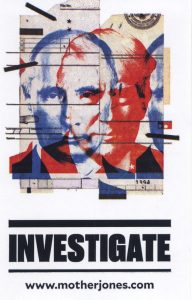 The full Steele dossier can be found here. A sidebar note: Buzzfeed was sued by Aleksej Gubarev, a “Russian Internet entrepreneur”, claiming defamation after being mentioned in the dossier for playing “a role aiding the Russian government’s effort to hack documents from Democratic Party officials”. A district court sided with Buzzfeed.

Cohen’s testimony invites a revisit of the dossier, but we are also prompted by this opinion column by Ross Douthat for the New York Times: The State Of Russiagate: How The Steele Dossier’s Scenarios Look After Michael Cohen’s Testimony.

“The first of four big claims, now established, by the dossier was “that Russian intelligence was behind the hacks of the Democratic National Committee and the release of stolen emails through WikiLeaks”.

“The next possibility was that a Russian project to cultivate Trump, supported and directed by Putin, had been going on for many years, and included both offers of “sweetener real estate business deals” (which Trump supposedly declined) and “a regular flow of intelligence from the Kremlin” (which he supposedly accepted).

“The third possibility was that this relationship dramatically influenced the 2016 campaign. According to Steele’s sources, there was possibly “a well-developed conspiracy of co-operation” between Trump’s campaign and Russian intelligence, managed by Paul Manafort with Michael Cohen playing go-between in Prague, which encompassed the D.N.C. hacking — a crime carried out “with the full knowledge and support of Trump and senior members of his campaign team.”

“The final possibility, of course, was that Russia had so-called “kompromat” on Trump — above all, the pee tape.”

You may be struck by the author’s wording and already recognized the intent. After offering that “If the D.N.C. hack took place with Trump’s cooperation as part of a longstanding exchange of favors, then he would be guiltier than Nixon, having participated in a Watergate with a foreign power as the burglar”, but then offers his defense, citing convicted Trump lawyer and fixer, “Cohen’s testimony dovetailed with the always-more-plausible narrative in which Trump and his circle weren’t collaborators but fools and wannabes, who might have been willing to play games with spies and hackers, but who mostly just bumbled around haplessly on the sidelines.”

So Douthat argues, Trump and his gang were open for business with Russia but too incapable to consummate an actual crime. The “endgame” will exonerate Trump even if he also looks indecent and immoral.

Here’s a second view: John Dean: I Testified Against Nixon. Here’s My Advice for Michael Cohen.

The subhead offers Dean’s uniqie perspective: My appearance before Congress helped take down a president. Will the same thing happen to Trump?

John Dean was “a White House counsel under Richard Nixon” and he draws parallels with Cohen and testifying “about criminal conduct of a sitting president of the United States” starting with:

“There is one overarching similarity that Mr. Cohen and I share. He came to understand and reject Mr. Trump as I did Mr. Nixon.

“…The day I told Mr. Nixon there was a cancer on his presidency was the day I met the real Nixon. I knew I had to break rank.

“Mr. Cohen has likewise come to see Mr. Trump for his true nature. At the very end of his testimony before the House Oversight Committee, he sought permission to read a closing statement.

“He thanked the members, and again accepted responsibility for his bad behavior. He then told the legislators, “Given my experience working for Mr. Trump, I fear that if he loses the election in 2020 that there will never be a peaceful transition of power, and this is why I agreed to appear before you today.” This was the most troubling — actually, chilling — thing he said in his five hours before the committee.”

Dean notes the greatest similarity between his experience and Cohen’s: “both challenged authoritarian presidents of the United States by revealing their lies and abuses of power”.  Cohen’s lawyer Lanny Davis clarified that Cohen’s warning was about Trump’s “authoritarian mind-set” but however literal the warning is meant to be, Dean cautions:

“…all Americans are affected by the growing authoritarianism that made Mr. Trump president. These people who facilitated his rise will remain long after Mr. Trump is gone. We need to pay more attention.”

Are we paying attention? Here’s a quick roundup of what can we expect next, starting with House Oversight Chair Elijah Cummings plan: Michael Cohen’s Road Map for Democrats.

Cummings plans to keep it simple, “all you have to do is follow the transcript”, starting with:

“…the newly empowered House Democrats have been gearing up for intense scrutiny of the Trump Organization and Deutsche Bank—the Trump family’s bank of choice for decades, which was recently involved in a massive Russian money-laundering scheme.”

Cumming’s promise to “follow the transcript” will certainly include this:

“…Cohen brought up names both familiar—including Allen Weisselberg, the longtime chief financial officer of the Trump Organization—and unfamiliar, including the former Trump bodyguard Matthew Calamari, and Ron Lieberman, the Trump Organization’s executive vice president in charge of management and development.”

Calling in the family money man

The House Financial Services Committee also plans to “look into the Donald J. Trump Foundation, Trump’s charity. The House Oversight and Reform Committee “huddled to discuss, among other things, two checks that Cohen presented to the panel, which Cohen said were his reimbursements after he paid adult-film star Stormy Daniels $130,000 not to go public with claims of a sexual encounter with the future president”. Cohen also pointed to Trump’s personal secretary, Rhona Graff, “Cohen testified that Graff patched through a phone call to Trump from political operativeRoger Stone, shortly before WikiLeaks posted 20,000 hacked Democratic emails in July 2016”.

Though Dems have no immediate plans to call Donnie Jr. or Ivanka, “at least six committees are investigating some piece of Trump’s life before the presidency”.

And maybe Dems will bring closure to one high profile outstanding Trump deliverable, “Democrats are crafting a request to send to the IRS and say they will “take all necessary steps” to obtain the president’s returns”.

Douthat and Dean have very different views of a Trump endgame. Douthat seems to believe Trump, while immoral, didn’t collude. Dean looks past Trump as an authoritarian president and warns about the long battle ahead to rebuild our democracy. Either way, Dems on Capitol Hill are investigating a range of Trump history.

We’ll end with additional perspective. Here you’ll find ‘Above the Law’ executive editor Elie Mystal pointing out that Trump was “small potatoes” and could have lived out his life had he not run for the presidency. (Comment comes after the 7-minute mark).

Finally, with humor, we offer SNL’s view of a part of Cohen’s testimony that got to the heart of why Trump is so supported by Russpublican’s as he is.

The final thought to all of this: Impeachment is not a criminal proceeding and does not need to be for a criminal act.