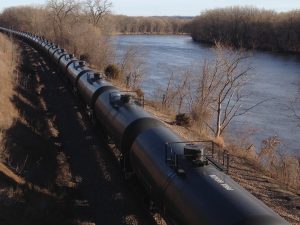 We need a new politics that creates a new economy.

Now that the Green New Deal has been widely discussed the naysayers are lining up to trash the idea. This has been expected. Outside of the climate crisis deniers — fortunately an increasingly small group — the largest push is coming from the “free market” advocates who do not want to lose their gravy train of “return on investment” on fossil fuels and its related industry.

When modern capitalists bring out the old saw about markets being the best way to regulate business activity they conveniently forget their own corollary of external costs. If the cost of the destruction of the bio-sphere was calculated into “free market” pricing, renewable energy would be “too cheap to meter”, as nuclear advocates used to say. If the government subsidies for fossil and nuclear power in the forms of limits to liability and special tax breaks were eliminated, none of these traditional energy systems could compete with emerging green technologies, which have been hamstrung by the very government actions that prevent the markets from being “free”.

The total costs of human activity need to be reflected in the prices we pay. Sustainable economics, where life cycle costs are thoroughly calculated and figured into planning, are the way out of our nightmare.

Ignoring the external costs of the heavily government subsidized fracking has, for example made natural gas so cheap that many alternative projects have been canceled. The resulting leakage of this green house gas in its production and transportation has reversed all of the gains in automobile pollution reduction. Efforts to maintain the status quo through lobbying, political contributions, and industry propaganda are additional costs the consumers are forced to pay to maintain the mythical “free market”.

The last gasp of “letting” the market do it’s job is to tack on limits such as the carbon tax. The idea of allowing the market to regulate itself seemed a bit fanciful when first proposed, but 50 years ago this idea had a chance to make a difference. Most of the promising renewable technologies taking hold now were taking shape then. A decade of intense development and implementation in the 80’s would have saved us trillions in climate related damage. The wars for oil in the Middle East, and the resulting war on terror would have been “unnecessary”, saving us millions of broken lives and trillions of dollars that could have funded the change to renewables, universal health care, free education, and infrastructure. Now we need something a whole lot stronger, and immediate, than a carbon tax to save our bacon.

Hostage to a rigged economy

The market does not, and never has worked morally, and a rigged economy can not be allowed to control our politics, if you want a sane and healthy world. The commons belongs to the entire herd, and not just the human one. All choices, from land use planning, to resource extraction, to waste removal are social ones; they affect everyone, not just the profit takers. The total costs of human activity need to be reflected in the prices we pay. Sustainable economics, where life cycle costs are thoroughly calculated and figured into planning, are the way out of our nightmare. Unfortunately, capitalism in it’s current form is totally unprepared to be that responsible. Multiple past attempts by the political system to save the business community from itself have been reversed every time business got on its feet again. We need a new politics that creates a new economy.

The mistranslated biblical reference to human dominion — or dominance — over the planet needs to be corrected to one of husband, caretaker, or shepherd. A return to the native understanding of being one with the environment, placing oneself in harmony with the natural world is required. We have been lazy and ignored the warnings glowing red for the past 50 years. Rational investigation shows unequivocally that we are responsible for accelerating change in our nest. We now have a decade to make a difference and we have the technical ability to do so.

(Commoner Call photo by Mark L. Taylor, 2019. Open source and free to use with a link to www.thecommonercall.org )

Dianne Feinstein Horrendous Reaction To Child Activists Is In Stark Contrast To How Bernie Spoke To Kids About Climate Crisis … Way Back In 1987!

Sen. Diane Feinstein’s disasterous interaction with a group of school kids about the Green New Deal stands in stark contrast to how Sen. Bernie Sanders spoke to school kids about climate crisis, way back in 1987.

Rachel Martin talks to David Wallace-Wells, author of The Uninhabitable Earth, who outlines the current misunderstandings and upcoming impacts of climate change.