“It’s increasingly likely that, in the end, the only question will be whether Donald Trump has been a WITTING or UNWITTING Russian asset.”

It is tempting to follow Trump’s trail of chaos as if that is the big news. To their credit, NBC News offers a good case for this: Ethically Challenged: Three Scandals Rock Trump Administration In One Day.

NBC News freely acknowledges “it’s hard to keep up with all of the alleged scandals…here’s what we learned in just one day”. They nominate Trump’s pressure on acting attorney general Matthew Whitaker “to put a Trump ally, the U.S. attorney in New York, in charge of the Michael Cohen investigation, according to the New York Times.”

Second, and we’ll come back to this, “Whistleblowers have told a congressional committee that efforts by former national security adviser Michael Flynn to transfer sensitive nuclear technology to Saudi Arabia may have violated the law, and investigators fear Trump is still considering it,” NBC’s Ken Dilanian reported.”

Third, Congressional Dems say the “Department of Education tried to oust the department’s independent watchdog after she pushed back on an attempt to interfere in an active investigation of Secretary Betsy DeVos,” as reported by NBC’s Heidi Przybyla.”

If the tables were flipped any one of these would have put enough fuel in Russpublican tanks to fuel months — years — of empty Benghazi hearings against the Obama or a Clinton administration.

Instead, we’ll run with this as the top story: Justice Department Preparing For Mueller Report As Early As Next Week.

Starting with what CNN is reporting:

“Attorney General Bill Barr is preparing to announce as early as next week the completion of Robert Mueller’s Russia investigation, with plans for Barr to submit to Congress soon after a summary of Mueller’s confidential report, according to people familiar with the plans.

“The preparations are the clearest indication yet that Mueller is nearly done with his almost two-year investigation.

“…The scope and contours of what Barr will send to Congress remain unclear. Also unclear is how long it will take Justice officials to prepare what will be submitted to lawmakers.”

Here’s some color behind the statement:

“On Monday, Tuesday and Wednesday last week, special counsel’s office employees carried boxes and pushed a cart full of files out of their office — an unusual move that could foreshadow a hand-off of legal work.

“At the same time, the Mueller prosecutors’ workload appears to be dwindling. Four of Mueller’s 17 prosecutors have ended their tenures with the office, with most returning to other roles in the Justice Department.

The reactions run from alarm to a level of confidence that this was expected and the Dem House was waiting for Mueller’s report to draft articles of impeachment.

We’ll quickly learn whether Trump gets what he hoped for with his new AG Bill Barr. The timing is good, Trump seems to have finished up his three-day Mar-a-Lago golf and omelette bar outing following his announcement of his national emergency. All are rested and ready for a showdown. 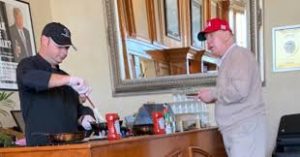 “President Trump’s former national security adviser and other White House officials pushed a venture to bring nuclear power plants to Saudi Arabia over repeated legal and ethical warnings that potential conflicts of interest around the plan could put American security at risk, concluded a new report from House Democrats released on Tuesday.

“The 24-page report from the House Oversight and Reform Committeeoutlined actions taken in the early weeks of the Trump administration to secure government backing to have American companies build dozens of nuclear power plants across Saudi Arabia, potentially at the risk of spreading nuclear weapons technology. But House Democrats said there was evidence that as recently as last week, the White House was still considering the proposal.”

This was the work of convicted former Trump national security adviser Michael Flynn but the idea did not die with Flynn’s resignation in 2017. Whistleblowers are behind the 24-page report.

Not only does this plan “potentially risk (of) spreading nuclear weapons technology”, there is financial benefit to the Trump family. This from a Washington Post news roundup for February 20:

Conflict of interest?: One of the power plant manufacturers that could benefit from a deal with Saudi Arabia is a subsidiary of Brookfield Asset Management, the company that took a 99-year lease on Kushner’s troubled Manhattan property at 666 Fifth Ave.

As we recently reported, Jared Kushner and his clan were bailed out by Brookfield Asset Management with a front-end payment of a 99-year lease on the 666 Fifth Ave. property. How many $ billions in personal benefit to Kushner in hand with a potential illegal nuclear technology transfer to the Saudis with a likelihood of fueling a nuclear arms race in the Middle East?

To round out Trump’s nuclear news, Putin took time to threaten that Russia “will target the United States if Washington deploys missiles in Europe”, to which Trump has responded by saying … absolutely … nothing.

But, wait — as always in Trumplandia — there’s more. Much more.

“The Washington Post reported that McCabe’s book, “The Threat,” details an instance in July 2017 where Trump did not believe information in an Oval Office briefing that North Korea test-fired an intercontinental ballistic missile for the first time.

“McCabe wrote that Trump called the launch of the long-range missile a “hoax,” telling officials he knew North Korea did not have the ability to launch that type of missile “because Vladimir Putin had told him so.””

While there is much more to McCabe’s book, the point here is that Trump places his trust with Putin over his own intelligence services, even to the point of turning a deaf ear to Putin’s nuclear threats to the United States. And at the same time is enriching the family bank accounts with a likely illegal transfer of nuclear technology to the Saudis, risking a nuclear arms race in the Middle East.

Just another day in the Offal Office

As with every Trump act of chaos – those he deems as ‘losers’ are also made to suffer. As never-Trumper and political strategist Rick Wilson titled his book, ‘Everything Trump Touches Dies’. Trump’s latest casualty is likely to be his director of national intelligence Dan Coats “who recently had the temerity to offer an accurate depiction to Congress as to what intelligence assessments have concluded regarding threats to the United States”. Coats’ testimony “undercut Trump’s own public statements, making him look foolish”.

Who is Trump to believe, his own director of national intelligence or Putin?

There is always so much more. Like a report that “Commerce Secretary Wilbur Ross violated his ethics agreement and submitted a financial disclosure form that “was not accurate,” according to the Office of Government Ethics”. Imagine someone close to Trump lying about his business dealings while serving in the Trump administration.

Imagine the Russpublican leadership being advised by the FBI that there was an open investigation of Trump, who was suspected of being at least an unwitting Russian asset. As reported in Esquire: They All Know How Bad It Is. They Do Nothing.

“The Gang of Eight is made up of the Democratic and Republican leadership in both houses of Congress, plus the chairman and ranking members of the House and Senate Intelligence Committees. In 2017, at the time McCabe requested the investigation, these would have included Senator Mitch McConnell, Speaker Paul Ryan, Richard Burr, and White House lawn ornament Devin Nunes from the House. According to McCabe, even Nunes didn’t object to the investigation. This is just a bit astounding, considering the supine performance of congressional Republicans once the president* got sworn in.”

By the time of this briefing House Intelligence Chair Rep. Devin Nunes (R-CA) had already shown himself to be an unabashed attack dog against any investigation of Trump-Putin collusion, let off his leash by House Speaker Rep. Paul Ryan (R-WI).

We’ll end with a rhetorical question to ponder:

Is it worse that Russpublicans have only ever impeded any real investigation of the potential of Trump treason, or that they continually turn a blind eye to ongoing legal and ethical violations that pose a real threat to the world?

Forget Whitaker, DeVos, Ross, Nunes, Kushner’s billions or a fake national emergency golf outing. In just a few days of news we unequivocally see Trump valuing the advice of Putin while adding to the risk of nuclear war from North Korea to the Middle East. Can anyone imagine why discussion of the 25th Amendment might have come up in Trump’s own Justice Department?