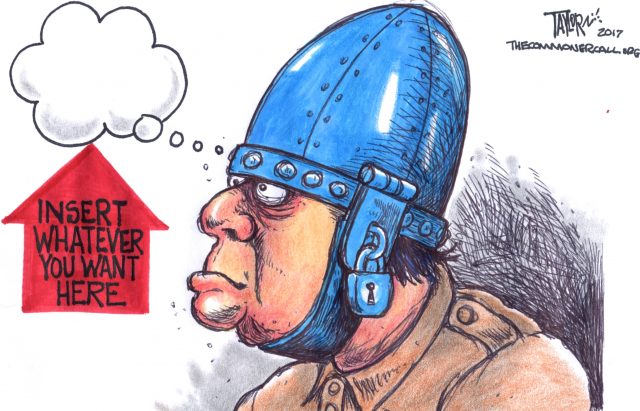 TUCSON, Arizona – Donald Trump’s Wall is illusory, but the writing on it seems clear enough. He is plotting a coup d’etat, gambling that divided Democrats, media sycophants, big money and people who don’t vote will enable his cult to make him a modern-day Mussolini.

Trump might watch next year’s elections play out as a disgraced has-been on the sidelines, perhaps behind bars, as Elizabeth Warren predicts. But that is a wishful long shot. If he is re-elected, America will find itself tested to a degree that is hard to imagine.

Trump himself sketched out his scenario in singsong mockery when he elbowed aside Congress to confront his bogus border emergency. Legal challenges will work their way up past uncompromised judges to a Supreme Court that Mitch McConnell has allowed him to pack.

Rather than call out Xi Jinping on human rights, he lauds his solution to drug dealers: executions. And to distract from trouble at home, he beats on war drums with dire threats, risking global conflict.

Robert Mueller has already nailed six Americans close to Trump, along with 26 Russians. Andrew McCabe says Rod Rosenstein worried enough that the president might be Vladimir Putin’s stooge to suggest on two occasions that he wear a wire into the Oval Office.

That alone would oblige a real president to clear himself of suspicion and determine whether America’s fiercest foe was perverting its elections. Trump condemns “a ridiculous partisan investigation” and repeatedly tweets “NO COLLUSION!” as if it were only about him.

The irony is breathtaking. A president who spouts a dozen untruths a day dismissed what he called Democrats’ falsehoods – in fact, official reports from U.S. agencies – that most drugs are smuggled through ports of entry. “It’s wrong,” he said. “It’s just a lie. It’s all a lie.”

Quality newspapers beaver away, reporting hard facts to the fraction of Americans who read them. Most people, instead, exchange dubiously sourced “news” on their phones when not obsessing on sports, celebrity follies and freak weather they don’t link to climate chaos.

One recent morning, CBS ignored crucial news to dwell on a week-old story about a guy who fended off a mountain lion. Next up for citizens starting their day in an imperiled republic was “The Doctors.” The host’s opening line: “Do you get an erection when you poop?”

Somewhere between stupid and insane

Which brings us back to Trump. He toadies up to dictators he admires. Rather than call out Xi Jinping on human rights, he lauds his solution to drug dealers: executions. And to distract from trouble at home, he beats on war drums with dire threats, risking global conflict.

Chest-bumping with North Korea, then Iran, falls somewhere between stupid and insane. Yet old GOP foes join in for their own political survival. Marco Rubio (“Little Marco,” who called Trump a con artist) now takes it upon himself to threaten an invasion of Venezuela.

Watch this space for analyses of how U.S. foreign non-policy strengthens China and Russia, while fortifying hard-right parties across Europe. India, the world’s largest democracy, is sinking fast into authoritarianism. For now, America’s existential crisis is at home.

Reporters are manhandled not only by goons at Trump rallies but also by police at the Capitol when they seek comment from legislators who represent that increasingly forgotten cohort at the heart of it all: we, the people.

Overweening authority combined with so many people who make snap judgments without weighing details create a polarized society in which extremists thrive.

A Slate dispatch just went viral under the headline: “11-Year-Old Arrested After Refusing to Stand for Pledge of Allegiance.” That was in Lakeland, Florida, a year after a school massacre fired up national outrage over America’s new directions.

In fact, police said the boy was arrested because he was “disruptive” and “made threats” while being sent to the principal. School authorities faulted a substitute teacher who didn’t know that pupils are not obliged to stand for the pledge. They said police, not the school, decided on an arrest.

According to Slate, the substitute teacher asked the kid, “Why if it was so bad here he did not go to another place to live?” The answer is easy enough. Zealots don’t get to redefine America according to their own biases.

A Supreme Court justice wrote in 1943: “If there is any fixed star in our constitutional constellation, it is that no official, high or petty, can prescribe what shall be orthodox in politics, nationalism, religion, or other matters of opinion, or force citizens to confess by word or act their faith therein.” There are, he added, no exceptions.

That was when America was fighting its last unavoidable war. When it ended, wise U.S. presidents repaired a broken world. They helped rebuild Germany and Japan into democracies that now do much to protect an imperiled globe from Trump’s repeated abuses.

Here is more of that breathtaking irony. Trump-think flouts America’s wealth and military clout with patriotic fervor as if those aspects were what mattered. That is fast destroying what actually makes America great: a history of defending human values.

With luck, I’ve got it all wrong. Much of America still works as it should, and smart young people are trying to fix insoluble problems bequeathed by us elders. But ask any teacher who stays in an underpaid, underappreciated profession about the bulk of today’s students.

Like the economic successes for which he takes credit, Trump inherited conditions that make America vulnerable. Since the 1980s, wealthy oligarchs have gutted public education to widen the gulf between a privileged few and the workaday majority.

It is hard to blame kids for wanting stuff flaunted everywhere in a society so focused on itself. A hedge fund tycoon just paid a $250 million for a Manhattan apartment, a year’s salary for 5,000 teachers who might inspire critical thinking about America and the world beyond.

And yet Trump brought cheers of “U.S.A.!” in his State of the Union speech with an audible-to-all dog whistle: “Tonight, we renew our resolve that America will never be a socialist country!”

What is it about that word? We live on social media. Rich matrons are socialites. Even during McCarthyism, neighbors gathered for pie socials. But add the suffix “ism” or “ist” and even America’s 99 percent freaks out.

Socialism is a wild-card word. France under Francois Hollande was hardly a communist gulag. Soviet socialism defined a capitalist system that George Orwell parodied in “Animal Farm.” Pigs ruled, walking on two legs. Some animals were more equal than others.

In essence, it simply means a system in which the rich allow the poor to have enough so they can live decently without having to take what they need by force.

Fascism, as Webster defines it, is more precise: “A political philosophy, movement, or regime that exalts nation and often race above the individuals and that stands for a centralized autocratic government headed by a dictatorial leader, severe economic and social regimentation and forcible suppression of opposition.”

Last year someone on Facebook paired pictures of Trump and Mussolini, almost mirror images of men with jutting set jaws, and I-own-the-world gazes. I laughed at the captions: Il Duce and Ill Douche. Today, that is a lot less funny.