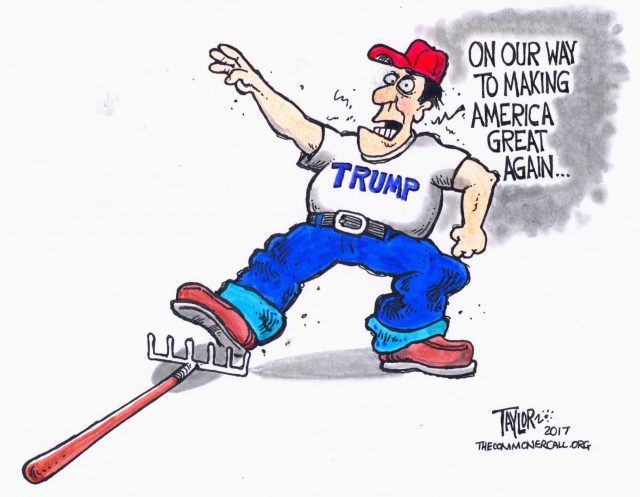 They stepped on this rake last year and now it’s hitting them in the face.

[Editor’s Note: The cartoon above was done two years ago. Even back then it was obvious to anyone paying attention that paycheck workers would get scammed and screwed by Trump and congressional russpublicans. Earth to Trump voters: You got screwed! — Mark L. Taylor]

But now that tax season is upon us, several million Americans are getting a nasty surprise: a bill from the Internal Revenue Service that they never expected.

Beth Callori of Long Island, New York, said she was thrilled to receive about $90 more in each paycheck last year. Thanks to the new lower federal income tax rates, Callori’s employer, a financial services firm, was withholding less from her paycheck for federal tax purposes.

But last week Callori heard from her tax preparer that she owes the federal government more than $5,000 ― almost five times as much as she had to pay in previous years.

“I almost fell out of my chair. I could not believe it,” she said. “I voted for Trump. I thought he was going to be good for this country, but when I got that phone call, that’s it, I’m done.”

Callori’s tax bill went up for two reasons. One is that the law directly disadvantaged her by limiting deductions for state and local taxes, which increased the amount of Callori’s income subject to tax and added an extra grand to her bill.

The bigger reason is that her employer withheld too little from her paycheck. The extra $90 she received should have been added to the amount that gets automatically socked away to cover the federal income tax. Like most people, however, Callori did not fill out a worksheet and submit a new Form W-4 to her employer at the beginning of last year.

After all, at that time Republicans kept bragging about the bigger paychecks they had given the American people.

“I thought because I was getting that, I’m entitled to it,” Callori said. …