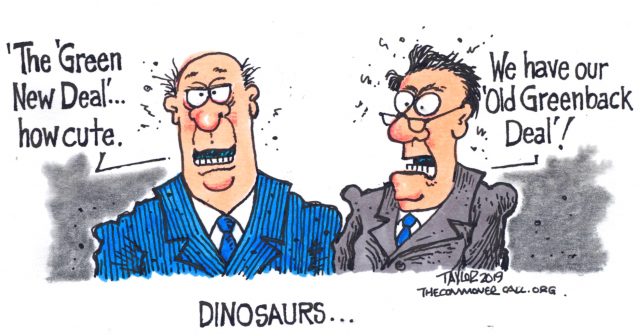 A party that responds to a challenge of this magnitude with stratagems, political calculations, cynicism, and half measures will not inspire voters; one that leads us toward a literal salvation, will.

Predictably, Trump came out against the Green New Deal with a bombastic – and ill-informed – rant in a campaign style rally in El Paso. Here’s what he had to say:

Meanwhile, Mitch McConnell intends to introduce the GND Bill in the Senate, and Republicans, pundits and politicians of most stripes are predicting the bill will hurt the Democrats’ chances in 2020.

But as usual, the inside-the-beltway crowd is way behind the people on this issue; polling clearly shows a large majority of the people support it. In fact, when key elements underpinning the GND were unpacked, Americans overwhelmingly supported nearly all of them, with many provisions polling above 80 percent favorable.

Right now, the Republicans’ unhinged rants against the GND are generating mostly ridicule among Americans, but that could change.

The real threat for dems is the old guard

But the real political danger to Democrats isn’t the Republican assault on the GND, it is that they’ll do what they did with Obamacare—run from the issue and allow the Republicans set the terms of the debate. That approach caused the Party to experience record losses at every level of government in 2014, and it looks like the neoliberals in charge of the party are about to do the same with the GND.

For example, here’s what Nancy Pelosi had to say about the Green New Deal: “…The green dream, or whatever they call it, nobody knows what it is, but they’re for it, right?” The rest of the Democratic leadership is following her lead, and the party’s old guard is following them.

Climate change is a reality based on physics, not politics. It can’t be negotiated with, or ignored, simply because it’s not politic. The job of anyone who is charged with governing must be to meet this challenge, not give up because it’s tough.

Much of the press and punditry is taking the same approach, and the general message from both the Washington cognoscenti and the press seems to be it’s not “practical” or “politically feasible,” forgetting that’s exactly what they said about Bernie Sanders’ progressive platform, positions that are now wildly popular with the people, and that form the basis of Democrat’s victories in 2018.

If you want to see a typical neoliberal critique of the GND, you couldn’t do much better than to read Jonathon Chait’s recent piece on it, which is full of hyperbole, misinformation, and outright mistakes or falsehoods. For example, early in the article he says:

Climate change experts have called for zeroing out emissions in the power sector by 2050, while the Green New Deal proposes doing so by 2030.

But while scientists cite 2050 as the dropdead date for cutting power sector carbon emissions, they also say that each increment of additional warming will cause harm and cost us. Moreover, there’s significant uncertainty embedded in the 2050 deadline; in fact, using the IPCC’s carbon budgets as the basis for establishing deadlines for action allows for a 34 percent chance of exceeding the target, and possibly triggering irreversible feedbacks. So the GND is simply a prudent approach that incorporates a rational safety factor for saving the world.

Both possible and necessary

Chait and his ilk also suggest that the goal of getting to net zero emissions is a technological pipe dream at this point, but again, they’re wrong. Right now, today, the cheapest source of new power is renewable wind and solar power. In some areas, it’s cheaper to shut down an existing coal plant and replace it with renewables than it is to keep running the old coal plant. Electric car sales are skyrocketing as their range and cost come down, and in Europe, they are cheaper to own and run than diesel and gas driven cars. Advances are in the pipeline that will increase their range and decrease charging time. Agriculture, the other big carbon source, can be converted from a carbon source to a carbon sink by changing to techniques that restore and preserve soils – something that we need to do in any case, since the world’s soils are rapidly depleting. Meanwhile, by making our buildings more efficient, we can reduce the amount of new power required to heat and cool them, and lower the cost of a transition to a no-carbon economy. And each of these endeavors creates jobs.

Republicans and some neoliberals are also raising the specter of the GND ushering in socialism, government despotism, and control of our daily lives and choices. And while it will demand unprecedented cooperation, it need not imply limits on our democracy. As Joseph Romm pointed out in a recent article, a World War II level effort is both possible and necessary if we are to preserve out Democracy. Indeed, nothing threatens our freedoms more than the human and economic catastrophes that would result from NOT mitigating climate change.

Finally, there’s the pragmatists and realists. As Chait puts it in his article:

And if doing anything meaningful on climate did require quickly enacting Bernie Sanders’s wish list, then we might as well give up, because nothing like that is going to happen in the next presidential administration.

It appears that Pelosi and the rest of the Democratic leadership shares this perspective. But climate change is a reality based on physics, not politics. It can’t be negotiated with, or ignored, simply because it’s not politic. The job of anyone who is charged with governing must be to meet this challenge, not give up because it’s tough.

The time is now

The “realists” and “pragmatists” who are advocating caution and warning that embracing the GND will result in Trump winning in 2020 have it exactly wrong. The only way Trump wins is if the Democrats abrogate their responsibility. The people are ready; the technology is at hand; the time is now.

As Gandhi once said, “There go my people. I must follow them, for I am their leader.” The Democrats have tried the practical and cautious route — the route that has tied them to the elitists and the corporatists; the one that made them run from a populist progressive platform; the one that has reduced them to a minority party — for four decades now, and it has cost them dearly.

But the stakes are more than political, they are existential. Failing to embrace the GND and head off the global catastrophe that is climate change isn’t simply bad politics, it is tantamount to allowing the wholesale destruction of the climate and ecosystem in which humans evolved.

A party that responds to a challenge of this magnitude with stratagems, political calculations, cynicism, and half measures will not inspire voters; one that leads us toward a literal salvation, will.

A radical Green New Deal would open up enormous possibilities for human flourishing — and allow us to reclaim the language of freedom from the Right.

One of the biggest challenges of climate politics is that the solutions sometimes seem scarier than the problem. We worry that to truly decarbonize, we’d need an authoritarian government or endless austerity. But a big and bold enough Green New Deal could finally make us truly free.

The principles that animated the New Deal are often associated with Franklin Delano Roosevelt’s (FDR) proposed (but never fully enacted) Economic Bill of Rights. These included rights to employment, medical care, housing, education, and social security. Those goals are tragically unrealized for many Americans, and any just version of the Green New Deal must start there. They’re familiar goals for the Left, ones we’ve been championing for decades. But we also need to rework another New Deal–era statement of principles — FDR’s Four Freedoms.

In the twilight hours of 1941, as New Deal progress stalled in the face of white Southern resistance to federal power, and the war against Hitler intensified in Europe, FDR sought to describe freedom in new terms. He was struggling to firm up support for his faltering domestic agenda and an anticipated foreign one; the Four Freedoms were eventually mythologized and sentimentalized in paintings by none other than Norman Rockwell.

We’re not trying to reclaim American patriotism or gin up support for a coming world war. But the task of reimagining freedom is critical. In 1941, the Four Freedoms idea was a bridge between the New Deal’s unprecedented federal activism, pressed forward by a massive wave of labor and community militancy, and the wartime mobilization that followed, whose speed and scale now inspire the vision of a Green New Deal.

For decades, the Right has claimed the language of freedom. But their vision of freedom as your right as an individual to do whatever you want — so long as you can pay for it — is a recipe for disaster in the twenty-first century, when it’s clearer than ever that all our fates are bound up together. Freedom has to mean something more than the capitalist’s freedom to invest or the consumer’s freedom to buy.

Here we modestly upstage FDR with five freedoms that can orient us to an uncertain future. …