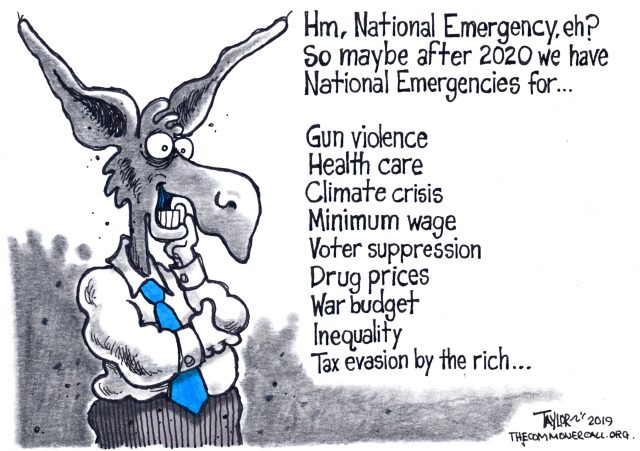 “So let me get this straight: Declaring Election Day a national holiday would be a ‘power grab,’ but declaring a national emergency over a manufactured crisis is totally fine?”

“I know the Republicans have some unease about it, no matter what they say. Because if the president can declare an emergency on something that he has created as an emergency, an illusion that he wants to convey, just think of what a president with different values can present to the American people.

“You want to declare a national emergency, what about the epidemic of gun violence? Talk about today, the one-year anniversary of another manifestation of an epidemic of gun violence in America. That’s a national emergency. Why don’t you declare that emergency, Mr. President? I wish he would. But a democratic president can do that. Democratic presidents can do that as well. The precedent the president is setting is something that should be met with great unease and dismay by republicans.”

“No, the goal of a national emergency is for Trump to scam the stupidest people in his base for 2 more years.”

Ex-RNC Chair Michael Steele Warns GOP On Trump’s Emergency: You Will Rue This

Former Republican National Committee chair Michael Steele is calling out his own party for enabling President Donald Trump’s reported plan to declare a national emergency to get funding for his border wall.

“At the end of the day, this is something Republicans will rue,” Steele said on MSNBC’s “MTP Daily” on Thursday.

Steele warned that once Trump declares an emergency to get funding for his wall, a future Democratic president will be able to do the same for any number of other issues.

“If any aspect of this is allowed to stand, they have no credence, no authority to criticize any Democratic president who stands up and says, ‘There’s a national emergency on guns and I’m hereby limiting the sale of future arms in this country,’” he said.