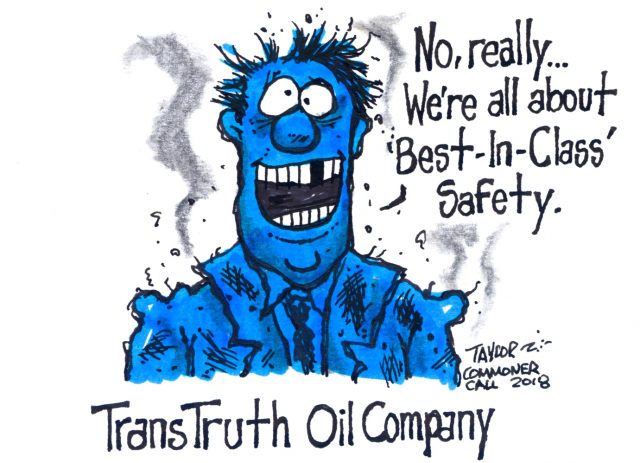 A North Dakota federal judge dismissed Energy Transfer’s racketeering lawsuit against Greenpeace and all its co-defendants in a sharply worded ruling issued today, finding that the pipeline builder’s allegations fell “far short of what is necessary to establish a [racketeering] claim.”

In August 2017, Energy Transfer filed a Racketeer Influenced and Corrupt Organization (RICO) Act civil complaint against Greenpeace and other environmental groups who had opposed the company’s Dakota Access pipeline, claiming that the protests had caused $300 million in damages (and requesting three times that amount from the defendants).

“We must and will continue to hold Energy Transfer accountable for its corporate behavior on current risky pipeline projects like Bayou Bridge where the company is continuing to use private security to intimidate protestors and has aggressively used eminent domain laws to secure land.”

The company labeled opponents “eco-terrorists” in its 187-page complaint, DeSmog reported at the time; Greenpeace responded that the lawsuit should be considered a Strategic Lawsuit Against Public Participation (a so-called SLAPP suit) and was nothing more than an attempt to deter legitimate organizing work.

Judge Wilson ruled today that Energy Transfer’s lawsuit could not go forward, dismissing all of the federal claims with prejudice (so that they cannot be re-filed), writing that “any additional amendments [by the plaintiff] would be futile.” He also dismissed the state claims, though without prejudice.

Energy Transfer said it planned to pursue futher action in state court, given that the federal judge had declined to hear their state law claims. “We are disappointed, but because the judge dismissed the state claims without deciding their merits, we intend to quickly pursue those in the appropriate venue,” Lisa Dillinger, an Energy Transfer spokesperson, said in a Friday email to DeSmog.

The federal judge dismissed Energy Transfer’s allegations of “wire fraud and mail fraud” in a single sentence. “There appear to be problems with both causation and the fact that most (if not all) of the alleged ‘false and sensational’ claims are either subject to debate, matters of opinion, or inconsequential.”

“This is a huge victory not just for Greenpeace but for anyone and everyone who has ever stood up against powerful corporate interests,” Greenpeace USA General Counsel Tom Wetterer said in a statement.

“Today’s decision to dismiss Energy Transfer’s baseless lawsuit against Greenpeace and others sends a clear message to companies trying to muzzle civil society that corporate overreach will not be tolerated,” he said. “It is also a check on corporate efforts to silence dissent.”

The ruling comes just one month after RICO claims against Greenpeace by Resolute Forest Products –- a case also filed by attorneys from Kasowitz Benson Torres (a law firm used by President Donald Trump) – were similarly dismissed in January.

Greenpeace hailed the federal court decision as showing that, in their words, “[j]ustice has been served.”

“We must and will continue to hold Energy Transfer accountable for its corporate behavior on current risky pipeline projects like Bayou Bridge,” Wetterer said, referring to the Energy Transfer oil pipeline being built in Louisiana, “where the company is continuing to use private security to intimidate protestors and has aggressively used eminent domain laws to secure land.”