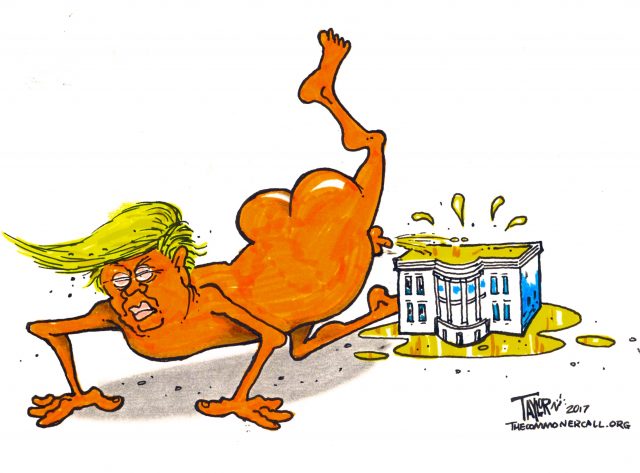 “Trump replied: “Fuck the law. I don’t give a fuck about the law. I want my fucking money.”

“Nearly nine in 10 Americans say Robert Mueller’s investigators should produce a full, public report on their findings, a sentiment that crosses party lines, according to a new CNN poll…“

It is almost certain Trump’s attorney general nominee Bill Barr is approved by the full Senate this coming week. Barr’s commitment to a full public report is not so clear.

“…called Mueller a “straight shooter” and said he didn’t believe the special counsel was overseeing a “witch hunt” ― as Trump has repeatedly branded the investigation.

“But Barr, testifying at his confirmation hearing, said that under his interpretation of the special counsel regulations, he didn’t believe that Mueller’s final report was required to be made public. Barr said he believed Mueller’s report would be “confidential,” but that as attorney general he would issue a public summary of its findings.

“Barr also said he believed that the attorney general had some “flexibility and discretion” about what he could disclose to the public after the Mueller investigation concluded.”

Barr did go a bit further and offered, “his “objective and goal” would be to push for as much transparency as he could.

What could possibly go wrong?

On the other hand, Trump’s legal problems are not limited to investigation by the special counsel: Virtually Every Organization Trump Has Run In Recent Years Is Now Under Investigation. Here’s Where Those Probes Stand.

A week ago Monday news broke that Trump’s inaugural committee had been issued a subpoena. We’ll come back to this after we note that reporter Aaron Blake reports Trump’s troubles include:

“Trump (obstruction of justice), we’ll update the BuzzFeed story on the many lies about Trump’s Moscow project with Trump lawyer and convicted felon Michael Cohen.

“Trump Organization, attorney generals have subpoenaed documents “as part of a lawsuit regarding whether it violates the emoluments clause”.

There’s the usual wrangling between House Democrats and Russpublicans. Politico reports: “The House Intelligence Committee voted on Wednesday to send dozens of witness interview transcripts from its Russia investigation to special counsel Robert Mueller, who could use them to prosecute potential instances of perjury.”

One step toward transparency while Russpublicans try to bar another. Politico reports: “Trump’s Treasury Department is readying plans to drag the expected Democratic request for Trump’s past tax filings, which he has closely guarded, into a quagmire of arcane legal arguments. At the same time, officials intend to publicly cast the request as a nakedly partisan exercise.”

If you want to explore it more check this link.  Each legal risk is linked to source information.

Everyone has been wondering where the all the money raised for Trump’s inauguration wound up: Trump’s Inaugural Grift Reportedly Lined His Own Pockets.

We’ve known for a year that the Trump inauguration raised and spent vast sums of money;  “twice as much as the previously most expensive inaugural event”. But there was no accounting for sources or use including possibly illegally accepting foreign money. Beyond Trumpster practices of greed, grift and pay-to-play the investigation is about Trump and family “apparent tax law violations — which amount to embezzling funds from the inaugural committee through self-dealing — were carried out for their personal benefit”.

As Michael Lewis reported for The Guardian in September 2018, Trump is once again helpful in recognizing his criminal behavior:

“The first time Trump paid attention to any of this was when he read about it in the newspaper. The story revealed that Trump’s very own transition team had raised several million dollars to pay the staff. The moment he saw it, Trump called Steve Bannon, the chief executive of his campaign, from his office on the 26th floor of Trump Tower, and told him to come immediately to his residence, many floors above. Bannon stepped off the elevator to find Christie seated on a sofa, being hollered at. Trump was apoplectic, yelling: You’re stealing my money! You’re stealing my fucking money! What the fuck is this?

“Seeing Bannon, Trump turned on him and screamed: Why are you letting him steal my fucking money? Bannon and Christie together set out to explain to Trump federal law. …. To which Trump replied: Fuck the law. I don’t give a fuck about the law. I want my fucking money.”

Putin and the hotel

There is only one way to properly appreciate what BuzzFeed has pulled together, you have to read this powerful article in full. But here is their introduction.:

“As a candidate, Donald Trump had a lot of praise for Vladimir Putin — and no business, he kept insisting, in Russia. These documents tell a different story.

‘When Michael Cohen, the president’s former lawyer and longtime fixer, testifies before Congress this week, one topic that is likely to be front and center is his work on Trump Moscow, the over-the-top luxury real estate venture he helped spearhead leading up to the election.

‘The development, which was never built, has already become a focus for special counsel Robert Mueller’s investigation into potential collusion between Trump and Russia during the 2016 campaign. And when Cohen was convicted last November of lying to Congress, it was over his false testimony that the deal had fizzled in January 2016, well before Trump emerged as the Republican nominee.

“BuzzFeed News is today publishing a cache of internal Trump Organization documents that lay bare the secret negotiations that continued long after Cohen claimed the deal had been abandoned. The documents, many of which have been exclusively obtained by BuzzFeed News, reveal that — despite Trump’s claim that the development was never more than a passing notion — the effort to get the tower built was long-running, detail-oriented, and directly entwined with the ups and downs of his campaign.

“As Trump went from rally to rally, vociferously denying any dealings in Russia, his representatives, Michael Cohen and his associate Felix Sater, worked with Trump Organization lawyers and even Ivanka Trump to push forward negotiations to build a 100-story edifice just miles from the Kremlin. The fixers believed they needed Putin’s support to pull off the lucrative deal, and they planned to use Trump’s public praise for him to help secure it. At the same time, they plotted to persuade Putin to openly declare his support for Trump’s candidacy. “If he says it we own this election,” Sater wrote to Cohen.”

“The White House did not respond to a detailed request for commentary on this story”, but on a separate note, Ivanka sought to distance herself from the news in spite of Cohen’s testimony. See if you can spot the lies.

“Ivanka Trump said in a new interview that she “barely” knew about the Trump Organization’s real estate project in Moscow that her father pursued while he also was running for president.

““Literally almost nothing,” the White House adviser told ABC News about her knowledge of the prospective deal for a hotel in the Russian capital. “We were an active business.”

““There was never a binding contract. I never talked to the — with a third party outside of the organization about it.”

Remember, Cohen’s guilty plea noted: “…said he had pursued the deal to build the property on Trump’s behalf — and had repeatedly briefed the president, his family and others on the progress of the effort”. But Ivanka wants us to know while igoring the lies, “it’s not like it’s a strange thing… to have a hotel in Russia”. And asked if she was worried for her relatives, she assured us, “I’m not. I’m really not.”

Meanwhile, Ivanka wants us to know, she and her husband get no special treatment: Ivanka Trump Says She And Jared Kushner Got No Special Treatment For Security Clearances.

Ivanka and Trump senior adviser and son-in-law Jared Kushner operated with “temporary security clearances for over a year”. Just standard procedure as explained by Ivanka, “This isn’t new. This was happening under the Obama administration, the Clinton administration.”

But as we previously reported as well as a sad update about the White House whistleblower who reported on Trump administration of security clearances:

“A White House security specialist has been suspended without pay for defying her supervisor Carl Kline, less than a week after NBC News reported Kline approved Jared Kushner for top secret clearance over the objections of career staff.”

Did you spot Ivanka’s lies this time?

We’ll close by highlighting the importance of the House Intelligence Committee transcripts being forwarded to the special counsel. Newsweek reports: Donald Trump Jr. ‘Expects To Be Indicted; And Is In ‘More Immediate Jeopardy’ Than Jared Kushner, Journalist Says.

“First son Donald Trump Jr. reportedly “expects to be indicted” by Russia probe special counsel Robert Mueller and has been telling people close to him for months, a journalist said Friday, matching the accounts of other people in the political realm.

““I think that Don Jr. is probably in more immediate jeopardy, just because of his congressional testimony,” Bertrand replied. “I mean, he has been telling his friends and associates that he expects to be indicted, and he’s been saying that for the last couple months.”

“Bertrand continued: “I think his accounts about the Trump Tower meeting in 2016, his accounts about Trump Tower Moscow and how involved he was in that, could put him in some legal jeopardy there.” She also reminded the panel that “Mueller has shown no shyness about going after people for lying to Congress.””