Separations Are Still Happening & Many Traumatized Children May Never Be Reunited With Their Families.

Trump administration officials are acknowledging that there may be thousands more missing immigrant children who were separated from their parents than originally reported. This was the focus of a hearing on Thursday of the House Energy and Commerce Subcommittee on Oversight and Investigations.

We speak to Lee Gelernt, deputy director of the ACLU Immigrants’ Rights Project. He is the lead lawyer on the ACLU’s national challenge to the Trump administration’s family separation practice. He testified at the hearing yesterday.

Support The Work Of The ACLU
In Reuniting Families, HERE.

When senior government officials and immigration advocates testified before Congress Thursday about the Trump administration’s “zero tolerance” policy, they told harrowing stories about the thousands of children separated from their parents at the border last year.

One 8-year-old boy was taken from his father and sent to a shelter more than 2,000 miles away with the false promise that he would see his dad when he got there. And a mother, who lost all four of her children and was awaiting the return of her youngest, was given the wrong baby back.

“I do not believe separation of children from their parents is in the best interest of the child.”

While the formal policy of separating families who cross into the U.S. without documentation may have ended, senior government officials said that migrant children continue to be taken from their families at unknown rates –– on the basis of minor criminal violations and even unproven claims that their parents are unfit.

The hearing, held by a House Energy and Commerce subcommittee, was one of the Democrat’s first displays of oversight power after taking back control of the chamber in the 2018 midterms. Testimony from senior government officials offered an inside look into the bungled rollout of the zero tolerance policy and the Trump administration’s harried attempts to reverse course after a federal judge ordered it to reunify families. The officials also shed light on the murky conditions surrounding ongoing family separations. …

America’s New Normal: We Have Sprinted Across The Threshold To Fascism 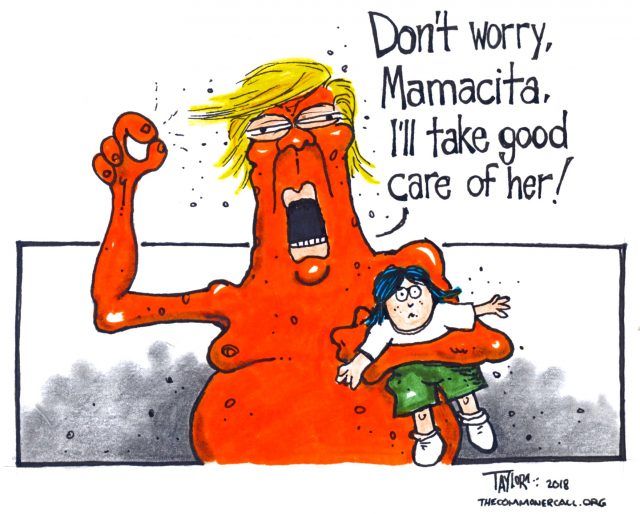 Even by Donald Trump’s bottom-scraping standards, the past week has been a head-spinning, heartbreaking gut punch to the nation. As Trump, Attorney General Jefferson Beauregard Sessions II and White House resident Hitler Reich Minister of Propaganda Joseph Goebbels look-a-like Stephen Miller ramped up the federal child kidnapping and imprisonment scheme any doubts about what we are facing should have gone up like an out-of-control dumpster fire. In case you haven’t noticed, we have spun far, far beyond the run-of-the-mill Republican vs Democrat, conservative vs liberal, right vs left paradigm of usual American politics. We have crossed the line — we are in a fascist state.

As suckling infants and toddlers were forcibly taken from their parents we had one of the usual right wing no-knowings on Fox News — now the official state news organ — dismiss the worries and outrage by blandly explaining, “Like it or not, these aren’t our kids. …These are people from another country.”

Trump’s campaign of demonization and dehumanization of the Central American refugees rounded up and herded into holding cages was dutifully echoed by a right wing “Christian” Tee-Vee host who declared, “We’re getting criminals. I mean, total criminals that are so debased and their minds are just gone. They’re unclean, they’re murderers, they’re treacherous, they’re God-haters.”

Anyone with even a basic familiarity of 20th Century fascism can recognize that all of this is straight out of the authoritarian fascist field manual. Once you have debased and dehumanized a group of people based upon anything different than the majority then you have granted yourself the right to not treat them as humans; anything is fair game in the name of racial , ethnic, religious, national purity or personal grudge. That door has not just been kicked opened in America; we have now sprinted across the threshold. …

On The Border: Prosecuting Americans For Saving Lives

The Border Patrol authorized and normalized “acts of cruelty against border crossers.”

SASABE, Arizona – A U.S. Army grunt freshly arrived from the Northwest was still puzzling over how to unwrap a tamale at the tumbledown general store and bar at this flyblown border outpost, but he had already sized up his mission to make America safe again.

“Kind of silly,” he said, with a chuckle. “Before, it would take a guy about ten seconds to get over that fence.” Now that troops have garlanded the steel uprights with concertina wire, he figures, “it’d take a little longer.” In any case, the fence ends five miles from here.

At the checkpoint, a veteran Customs and Border Protection agent, with a German shepherd and sharp eyes, echoed the soldier’s mirth. “I wish all those guys in Washington would spend just one day down here to see what the hell they’re talking about,” he said.

Down around Sasabe, that “under God” in the pledge of allegiance takes on practical meaning. Jesus Christ, Mohammed, Moses, Buddha and other brand-name prophets shared a simple precept: When lost people wander in the wilderness, at least show a little humanity.

Not even the Berlin Wall was impervious, despite its machine-gun towers and obstacle-strewn no man’s zone. Down here, 50 miles of forbidding desert watched by high-tech surveillance and green-striped SUVs do the job without evoking a hateful Evil Empire.

After squandering perhaps half a billion dollars on a show of military farce, Donald Trump is sending another 3,750 troops to chew up the desert until September.

A clearly marked border, with sturdy fencing where useful, is hard to call immoral, as Nancy Pelosi does. Yet immoral is tepid understatement for Trump’s wild distortions to stoke fear and loathing among his base with a jihad aimed at anguished migrants and refugees.

Sasabe is 68 miles southwest of Tucson down a two-lane blacktop that runs through the Buenos Aires Wildlife Reserve. Noble pronghorn antelope run free again, ranging across the border, after hunters hammered them to near extinction early last century.

Most crossers head northwest, avoiding ranches near the free-spirited artisan town of Arivaca up the road. They brave the larger, wilder Cabeza Prieta Wildlife Reserve through dense cactus and rocky outcrops along what Spanish explorers dubbed El Camino del Diablo.

The name stuck. In “The Devil’s Highway,” Luis Alberto Urrea traces 26 men who set out on it in 2001; 12 survived. He faulted what one Mexican consul called “the politics of stupidity that rules both sides of the border.” Today, stupidity is more prevalent on the north side. …