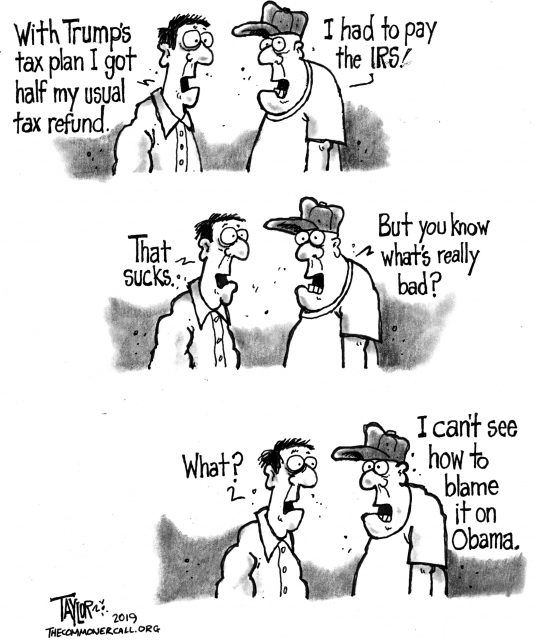 “People are going to be very, very happy. They’re going to get tremendous, tremendous tax cuts and tax relief and that’s what this country needs.”

“Multiple supporters of President Donald Trump over the past couple of weeks have taken to Twitter to air their grievances about the president’s signature tax cut plan.

Even though the 2017 GOP tax cut is leading to spiking federal deficits thanks to its generous benefits to corporations, many middle-class Americans are winding up having to pay more because the bill eliminated multiple deductions used by middle-class families to lower their annual tax payments.

Among other things, the tax bill capped deductions for taxes paid to state and local governments, while massively increasing the amount of money you must donate to qualify for a charitable giving deduction.”

Average tax refunds were down last week 8.4 percent for the first week of the tax season over the same time last year, according to the Internal Revenue Service. Dipping refunds are inflaming a growing army of taxpayers stunned by the consequences of the Trump administration’s tax law — and the effects of the partial government shutdown.

The average refund check paid out so far has been $1,865, down from $2,035 at the same point in 2018, according to IRS data. Low-income taxpayers often file early to pocket the money as soon as possible. Many taxpayers count on the refunds to make important payments, or spend the money on things like home repairs, a vacation or a car.

Many workers who had always gotten a refund find out they now owe the IRS.

The IRS had estimated it would issue about 2.3 percent fewer refunds this year as a result of the changes in the federal tax law, according to Bloomberg. MSNBC reports that 30 million Americans will owe the IRS money this year — 3 million more than before Trump’s tax law.

“There are going to be a lot of unhappy people over the next month,” Edward Karl of the American Institute of CPAs told Politico. “Taxpayers want a large refund.” Some 71 percent of taxpayers received refunds last year worth about $3,000 on average, according to Karl.

Scads of taxpayers are complaining on Twitter that they have always received a refund — but now owe the IRS instead.

The number of refunds sent out by the IRS was also down — about 24 percent — as the agency struggled to get up to speed after the government shutdown. The agency sent out about 4.67 million tax refunds in the week ending Feb. 1, compared with about 6.17 million in the same period in 2018, according to IRS data …

Whatever You Paid To Watch Netflix Last Month Was More Than It Paid In Income Taxes All Last Year: $0

“Netflix posted its largest-ever U.S. profit in 2018­­—$845 million—on which it didn’t pay a dime in federal or state income taxes.”

Whether you paid $8.99 for basic, $12.99 for standard, or splurged for the $15.99 premium package so you would have the privilege of watching endless streaming shows and movies on Netflix last month, a new analysis shows you still paid much, much more than the company paid in federal and local income taxes for the entire year.

According to Matthew Gardner, senior fellow at the Institute on Taxation and Economic Policy (ITEP), “The popular video streaming service Netflix posted its largest-ever U.S. profit in 2018­­—$845 million—on which it didn’t pay a dime in federal or state income taxes.”

Not a dime. Not one penny.

In fact, the streaming giant received a $22 million return.

“In fact,” noted Gardner in a blog post on ITEP’s website on Tuesday, “the company reported a $22 million federal income tax rebate.” So even if you paid Netflix nothing last month because you chose not to subscribe—or maybe you were enjoying an introductory free-month trial—you still didn’t make out better than the online giant.

Citing the specific impact of the Tax Cuts and Jobs Act, which the Republicans in Congress passed and Trump signed into law in December of 2017, Gardner explains that because companies are finally releasing their complete 2018 earnings reports—which Netflix did last month—the public is finally getting a look at just how well some of the nation’s most profitable corporations are making out.

While GOP leaders like former House Speaker Paul Ryan sold the bill to the voting public by promising lower corporate rates would be offset by the closure of loopholes, Gardner says Netflix is a test case for how bogus those promises were. “Many corporations are still able to exploit loopholes and avoid paying the statutory tax rate,” he explains, “only now, that rate is substantially lower.”

Netflix’s tax avoidance should come as no surprise to those who followed the debate leading up to the passage of the new tax law: A 2017 ITEP reportidentified Netflix as one of 100 profitable Fortune 500 corporations that paid a 0 percent federal income tax rate in at least one profitable year between 2008 and 2015. In fact, Netflix did it twice, and paid an average tax rate of 13.6 percent over the eight-year period, meaning that the company sheltered more than half of its profits from the 35 percent federal income tax rate in effect at the time.

Leading up to the 2017 tax battle, the hope of reformers was that Congress would take a fiscally responsible approach and weed out loopholes that made Netflix’s tax avoidance possible. Instead,  GOP leaders who championed the law and President Trump chose to focus on cutting the corporate tax rate as far as possible—from 35 to 21 percent—while leaving in place special breaks and loopholes.

“Netflix appears to be every bit as unaffected by corporate tax laws now as it was before President Trump’s ‘reform,'” Gardner concludes. “This is especially troubling because Netflix is precisely the sort of company that should be paying its fair share of income taxes. With a record number of subscribers, the company’s profit last year equaled its haul in the previous four years put together. When hugely profitable corporations avoid tax, that means smaller businesses and working families must make up the difference.”