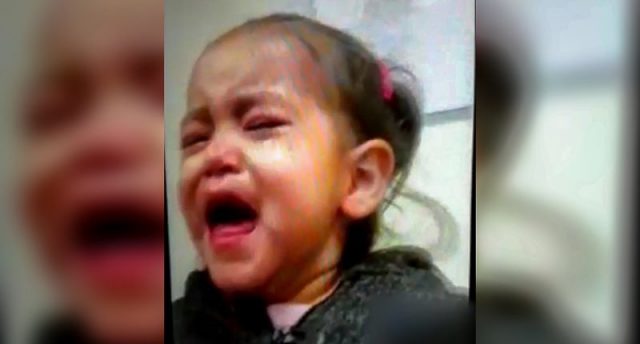 Screen shot of hysterical toddler Grethshell during a television ‘visit’ with her mother Sindy, a Honduran immigrant separated from her young daughter by U.S. border police.

“This type of prolonged exposure to serious stress—known as toxic stress—can carry lifelong consequences for children.”   – American Academy of Pediatrics

[Editor’s Note: All this child abuse is being done in our name, on our dime and thus — as citizens — we all bear moral responsibility for such ongoing brutal travesties to immigrant children and their families. Indeed, young Grethshell is the face of what America has become. — Mark L. Taylor]

A 23-year-old Honduran woman who lost custody of her daughter while migrating to the U.S. was told by immigration authorities that she would have to pay thousands of dollars to get her child back.

The New Yorker this week shared the story of Sindy who traveled to the U.S. with her husband and three children from Tegucigalpa, Honduras after their lives were threatened by gangsters. On the way to stay with Sindy’s uncle in San Francisco, she was separated from her husband and Grethshell, her toddler daughter.

When Sindy finally reached San Francisco, she began the search for Grethshell and eventually located her child in the custody of BCFS, a nonprofit organization which is contracted by the federal government to provide foster care for migrant children.

But immigration officials had refused to give Sindy permission to work while in the U.S. so she could not afford the plane tickets.

According to The New Yorker, Sindy was allowed to have weekly video chats with Grethshell, but by the second week, the daughter refused to look at her mother. …

Read or Rest and 6-Minute Video