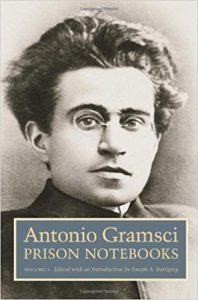 “The crisis consists precisely in the fact that the old is dying and the new cannot be born; in this interregnum a great variety of morbid symptoms appear.”

From Wikipedia: The Prison Notebooks (Italian: Quaderni del carcere [kwaˈdɛrni del ˈkartʃere]) were a series of essays written by the Italian neo-Marxist Antonio Gramsci. Gramsci was imprisoned by the Italian Fascist regime in 1926. The notebooks were written between 1929 and 1935, when Gramsci was released from prison on grounds of ill-health. He died in April 1937.

He wrote more than 30 notebooks and 3,000 pages of history and analysis during his imprisonment. Although written unsystematically, the Prison Notebooks are considered a highly original contribution to 20th century political theory. Gramsci drew insights from varying sources – not only other Marxists but also thinkers such as Niccolò Machiavelli, Vilfredo Pareto, Georges Sorel and Benedetto Croce. His notebooks cover a wide range of topics, including Italian history and nationalism, the French Revolution, Fascism, Fordism, civil society, folklore, religion and high and popular culture.

The notebooks were smuggled out of prison in the 1930s. They were not published until the 1950s and were first translated into English in the 1970s, by the Scottish poet and folklorist Hamish Henderson.

Some ideas in Marxist theory, critical theory and educational theory that are associated with Gramsci’s name:

No Bar To Love: The Tragedy Of Gramsci’s Prison Years As Revealed In Letters To His Wife & Sons

“When I see the actions and hear the words of men who have been in prison for five, eight or 10 years, when I observe the spiritual deformations they have undergone, it gives me a cold shiver and I begin to doubt my own power to watch over myself.” So wrote Antonio Gramsci to his Russian wife Julka, two years into the prison sentence that ended with his death in 1937. Gramsci’s subsequent fame rests on his prison notebooks – political essays on fascism and capitalism written while in Mussolini’s jails. But his letters, of which there were more than 500, tell the story behind that work. And they are a remarkable account of imprisonment.

With most of his family still in Sardinia and Julka back in Russia with their two sons, Gramsci realised that letters were now his only means of keeping a grip on what he called “the threads of life”.

Arrested on November 8, 1926, aged 35, Gramsci was a Sardinian-born journalist and agitator who had fought his way to the leadership of the Italian communist party. He was famous for his campaigning articles and had worked closely with Mussolini in the days when Il Duce was still a socialist and editor of the worker’s paper L’Avanti. Perhaps because of this, from the moment Mussolini seized power in 1922, Gramsci knew his position was precarious. Aged 35, he was arrested on November 8, 1926 despite parliamentary immunity and sent to the prison island of Ustica, where he expected to spend five years. …