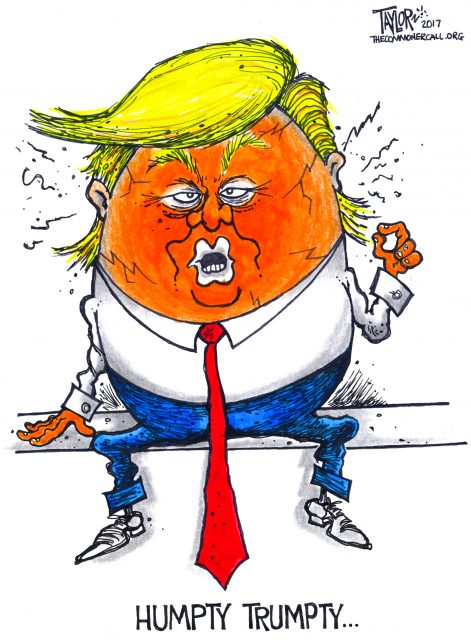 “According to the poll, 57 percent believe it’s likely that Russia “has compromising information“ on Trump, compared to 31 percent who don’t think it’s likely.”

The poll referenced above is worth a quick read. We, the American public, do not support Trump’s government shutdown as a strong-arm tactic to build a monument to himself. Aside from the tactic, we, the majority, do not support his Wall … period.

The guy who self-promoted as master of the  ‘Art of the Deal’ may have finally given a chunk of his base pause to embrace a likelihood of Putin with “compromising information” against Trump. After all the abuses he has imposed on so many, whoever picked his Wall-inspired government shut-down as an inflection point deserves applause.

Our last edition was dominated by BuzzFeed’s: President Trump Directed His Attorney Michael Cohen To Lie To Congress About The Moscow Tower Project.

While there is ongoing uncertainty about details of Trump guilt, Trump’s TV lawyer Rudy Giuliani managed to undo one of the few factual Trumpster talking points by regaling cable news viewers with all kinds of new insights about possible Trump crimes. Giulani assertions of Trump innocence, “because he listened to the “tapes”, was most confounding in the spicy gibberish stew he served up.

Which part of this do you think is the lie?

“In a Fox News interview, Donald Trump Jr. blamed Michael Cohen for the Trump Tower Moscow project saying, “We don’t know anything about it.”

“Said Trump Jr.: “But the reality is this wasn’t a deal — we don’t know the developer. We don’t know the site. We don’t know anything about it. Ultimately, it was Michael Cohen essentially trying to get a deal done. You know, he was there for a long time. He wasn’t exactly a deal guy.  He didn’t bring too many to the table. So, I don’t think anyone took it all that seriously.””

We’ll highlight “we don’t know anything about it”, but if you said, ‘all of it’ you were correct. Axios added this: “Trump Jr.’s statement contradicts multiple facts that have already been made public about the Moscow project — mentioned publicly in a 2013 Trump tweet — which was formalized in a letter of intent signed by Trump in October 2015 with a team of developers first revealed in 2017.”

Donnie Jr. denies but then BuzzFeed laid this on the Trump-Russia menu: Trump’s Lawyer Said There Were “No Plans” For Trump Tower Moscow. Here They Are.

The sub-head reads: Rudy Giuliani claims the Moscow tower was barely more than a notion. “There were no drafts. Nothing in the file.” Documents obtained by BuzzFeed News tell a different story.

Would the realization of a dream Trump had chased for decades be enough for Russian Kompromat? Does this sound like something that would interest Trump?

“The plan was dazzling: a glass skyscraper that would stretch higher than any other building in Europe, offering ultra-luxury residences and hotel rooms and bearing a famous name. Trump Tower Moscow, conceived as a partnership between Donald Trump’s company and a Russian real estate developer, looked likely to yield profits in excess of $300 million.”

So other than realization of a 30-year dream, a stunning monument (take a look at the architects renderings), a $300 million profit, an Ivanka Trump spa and a freebie Putin Penthouse, does this smack of a “nothing in the file”?

Trump ran for the presidency of the United States while lying about a $300 million pending deal with Putin for Trump Moscow, blithely ignoring repeated FBI warnings about risks of Russian Kompromat. You know who knew Trump was lying? Putin knew Trump was lying. Anyone arguing that it was never built misses the point. To Putin it was never about Trump Moscow, it was about his leverage over Trump to undermine the United States. Doesn’t take a spy master to figure out who got what he wanted.

It’s not only the American public that believes Putin has Kompromat on Trump. As an article in The Hill reported the United States House of Representatives doesn’t trust Trump: House Passes Bill Expressing Support For NATO.

“The bill, which passed in a 357-22 vote, includes a provision rejecting any efforts made by President Trump to potentially withdraw from the treaty. All the “no” votes were from conservative Republicans.

“Its passage comes days after administration aides told The New York Times that Trump has repeatedly floated pulling out of NATO over the course of the past year — a move critics fear would embolden Russia and threaten strategic international military alliances.”

Imagine having to pass legislation to prevent Trump from abandoning an alliance with allies forged over decades after the carnage of WW II but then again, we’ve seen him do it many times. Take a look at the 22 “no” votes in The Hill article and you’ll see some of your favorite cartoon-crazy goofball Trumpsters on the list.

But Trump did accomplish one legislative advantage for Putin and associates. Putin associate and oligarch Oleg Deripaska — who is linked to convicted Trump campaign manager Paul Manafort — has tried for years to be spared from U.S. economic sanctions. Putin’s pal is worth $4.6 billion and has now been spared further financial risk by a Republican-led Senate: Deripaska & Allies Could Benefit From Sanctions Deal, Document Shows.

The New York Times headline is understated and as we’ll see the Trump administration not only lied about “tough on Russia”, it is the opposite:

“When the Trump administration announced last month that it was lifting sanctions against a trio of companies controlled by an influential Russian oligarch, it cast the move as tough on Russia and on the oligarch, arguing that he had to make painful concessions to get the sanctions lifted.”

“The deal contains provisions that free him from hundreds of millions of dollars in debt while leaving him and his allies with majority ownership of his most important company, the document shows.”

Trump, his administration and a Russpublican Senate have rewarded Deripaska for his interference in the U.S. election giving him the freedom and undue financial benefit he has sought for years.

Another oligarch to benefit financially is Viktor Vekselberg, the fourth richest man in Russia at $13.6 billion. He is linked to a $500,000 payment to convicted Trump lawyer Michael Cohen and he contributed $285,000 to Trump’s inaugural committee. Vekselberg was even one of the Russians that attended Trump’s inauguration.

The Senate vote was 3 votes short of the required 60, 57-42 was the final vote with 11 Republican Senators voting to retain the sanctions.

Russian state TV laughed and celebrated the support of the Russpublicans highlighting eight Senators that rewarded the Russian, including our very own extra special Russpubican, Sen. Ron Johnson (R-WI). 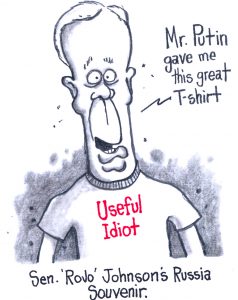 Now, now, don’t you be believing your lyin’ eyes, Sweetheart!

So much of Trump’s crimes, Russpublican complicity and Russian reward have been acted out in the open; right in front of us. It’s always bold. Shameless, and leaving one to wonder that this can’t be the crime or the complicity or the payoff, there must be more to it? Right?

It was always right in front of us just like the most recent Russia payoff. Trump chased a $300 million dream project, a big fat Russian karat dangled as Kompromat. Just this week the House rushed to protect the NATO alliance from Trump-Putin while Russpubicans agreed to protect and reward Russian oligarch billionaires.

Trump deflected with the Wall and disastrous government shut-down while the media debated MAGA Covington youth-Trumpsters but behind it all. Behind all the smoke and gaslighting, Putin payoffs continued.