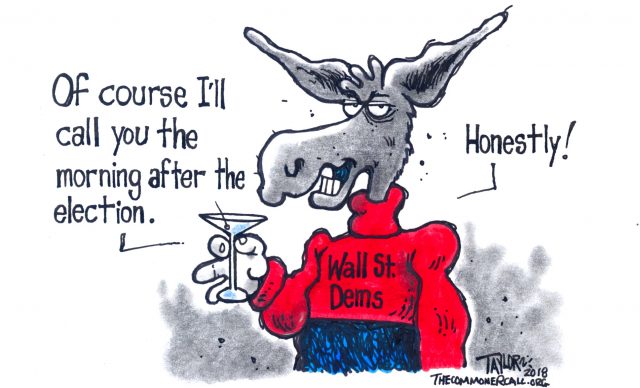 The American ruling class has a nice hustle going with elections.

It’s a framing that’s been everywhere over the past two years: the Resistance v Donald Trump. By some definitions that “resistance” even includes people like Mitt Romney and George W Bush. By almost all definitions it encompasses mainstream Democrats, such as the likely presidential hopefuls Cory Booker, Kamala Harris and Kirsten Gillibrand.

In their rhetoric and policy advocacy, this trio has been steadily moving to the left to keep pace with a leftward-moving Democratic party. Booker, Harris and Gillibrand know that voters demand action and are more supportive than ever of Medicare for All and universal childcare.
Gillibrand, long considered a moderate, has even gone as far as to endorse abolishing US Immigration and Customs Enforcement (Ice) and, along with Cory Booker, Bernie Sanders’ single-payer healthcare bill. Harris has also backed universal healthcare and free college tuition for most Americans.

“They know that while leftwing stances might help win Democratic primaries, the path of least resistance in the general election is capitulation to the big forces of capital that run this country. Those elites might allow some progressive tinkering on the margins, but nothing that challenges the inequities that keep them wealthy and their victims weak.”

But outward appearances aren’t everything. Booker, Harris and Gillibrand have been making a very different pitch of late – on Wall Street. According to CNBC, all three potential candidates have been reaching out to financial executives lately, including Blackstone’s Jonathan Gray, Robert Wolf from 32 Advisors and the Centerbridge Partners founder Mark Gallogly.

Wall Street, after all, played an important role getting the senators where they are today. During his 2014 Senate run, in which just 7% of his contributions came from small donors, Booker raised $2.2m from the securities and investment industry. Harris and Gillibrand weren’t far behind in 2018, and even the progressive Democrat Sherrod Brown has solicited donations from Gallogly and other powerful executives.

When CNBC’s story about Gillibrand personally working the phones to woo Wall Street executives came out, her team responded defensively, noting her support for financial regulation and promising that if she did run she would take “no corporate Pac money”. But what’s most telling isn’t that Gillibrand and others want Wall Street’s money, it’s that they want the blessings of financial CEOs. Even if she doesn’t take their contributions, she’s signaling that she’s just playing politics with populist rhetoric. …