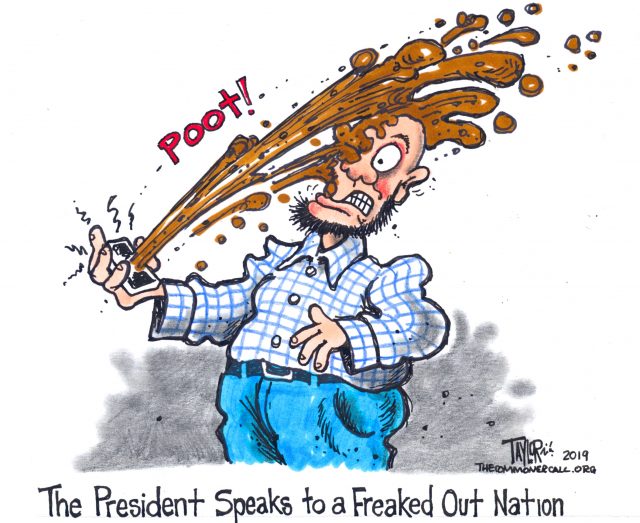 “Death twitch of The Wall cult.”

“This speech wasn’t about saving his utterly fake wall. The $5.7 billion dollars he’s demanded as his vig for ending the shutdown isn’t even close to being seriously considered, and this speech was an overt admission he’s out of airspeed, altitude, and ideas. The crisis he proudly created will end without a wall, and he knows it.

“This speech was supposed to be about forcing the national dialogue to stay on the border wall. No such luck. He reeked of defeat, clearly didn’t want to be there, and it showed.

“Trump looked exhausted, squinty, and bored, reading in a near-monotone from the Teleprompter.  It went over like a wet fart.”

“In his unfortunate remarks, the president ignored a genuine crisis: his administration’s vilification of vulnerable people fleeing persecution and violence in Central America.”

“Poll also illustrates Trump’s uncanny ability to dissuade people from his views. Competent presidents do the opposite.”

“”Yet privately, Mr. Trump dismissed his own new strategy as pointless. In an off-the-record lunch with television anchors…he made clear in blunt terms that he was not inclined to give the speech or go to Texas, but was talked into it by advisers” https://nyti.ms/2GY7VfY“

“Our response to the #TrumpAddress: LIAR.”

“This speech was such a nothing that it left some in the audience wondering whether the urgency the White House claimed was intended to distract from the raft of new revelations from Mueller’s Russia investigation. For Donald Trump, that’s a real crisis.”

— Jill Abramson, Trump’s Border Wall Address Was So Lame, Was It In Fact A Distraction?