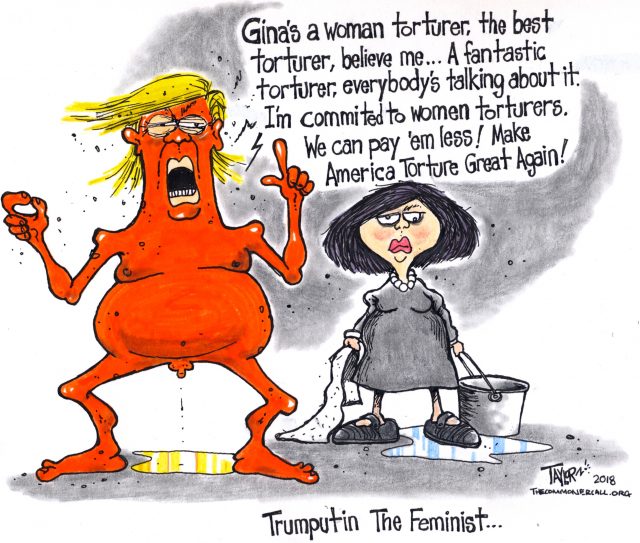 [Editor’s Note: keep in mind six democratic senators betrayed the constitution, international law and human decency  by voting to confirm torturer Gina Haspel in her confirmation hearing to be director of the CIA. This is a bipartisan disgrace.  — Mark L. Taylor]

Last week, the Central Intelligence Agency declassified what at first glance appears to be an innocuous transcript of a request for discovery and witnesses made by Guantánamo defense attorneys during a hearing in the “trial” of 9/11 suspect Khalid Shaikh Muhammad. In the transcript, the attorney complains to the judge that the defense team has not been able to interview the witnesses they want and need, and that they are not receiving the discovery necessary to mount an adequate defense. I say the transcript is innocuous because, while much of it is redacted, including entire pages, what is left is generally pro-forma back-and-forth between the judge and the attorneys. I learned nothing — until, that is, I got to the bottom of page 22,088. That’s right, page 22,088.

If true, this is blockbuster information. It has never before been public. That torture took place at Guantánamo is not in dispute. We know it thanks to the courageous whistleblowing of former Navy Department General Counsel Alberto Mora. And it’s all entirely plausible.

Don’t forget that Haspel was in charge of a secret site where al-Qaeda prisoners were tortured mercilessly. There were credible reports that she personally supervised the torture of USS Cole bombing mastermind Abd al-Rahim al-Nashiri. During her Senate confirmation hearings, Haspel refused to say that the torture program was a mistake. She also refused to say whether she had personally participated in the torture.

This revelation only strengthens the argument that Haspel’s appointment as CIA Director was a mistake in the first place. That mistake can be corrected by sending her into a quick retirement.

Don’t forget that Haspel destroyed videotaped evidence of the torture of Abu Zubaydah. Abu Zubaydah was the first al-Qaeda prisoner to be tortured. CIA officers waterboarded him, deprived him of sleep, beat him, kept him in a coffin-sized box for weeks at a time (throwing insects in with him because he had an irrational fear of them), kept him in a dog cage for weeks at a time, and twice tortured him so severely that his heart stopped beating and he had to be revived. All of this was filmed. But Gina Haspel put those tapes in an industrial grinder, despite the fact that the Justice Department and the White House Counsel had specifically ordered her to preserve them. Again, she showed no contrition in her Senate confirmation hearings.

According to the recently-declassified court transcript, the defense attorney complained to the judge that what the CIA “is not willing to talk about is the names of the people involved in the torture.” She then specifically named Haspel. The CIA and Defense Department agreed to the declassification. Would they have declassified the information knowing it was false? Probably. Would they have declassified it knowing it was true? That’s impossible to say. But most of Haspel’s CIA career is still shrouded in mystery. Her official CIA biography notes that she has served overseas for most of her 30-plus years at the Agency and that she likes movies and ice hockey. Any specifics about her career have come from dogged journalists.

Did she oversee the torture of prisoners at Guantánamo?

This new revelation raises an entire host of questions. When was Haspel at Guantánamo? Did she oversee the torture of prisoners there? Did she have personal contact with prisoners, including Khalid Shaikh Muhammad? Was there also video evidence of prisoners being tortured at Guantánamo? If so, did she destroy that, too? Did she disclose her time at Guantánamo to the Senate Intelligence Committee prior to her nomination hearing? Why was the information classified in the first place? Why was it declassified now? Was it an accident?

The CIA, of course, has no comment on the document. One former CIA officer with whom I spoke simply said, “I can’t believe they would declassify that. Maybe it’s not true.” I have no idea if Gina Haspel served as the CIA base chief at Guantánamo. The attorney may have misspoken or may have been misinformed. Either way, the CIA owes the American people an explanation. It owes the Senate Intelligence Committee answers to the above questions.