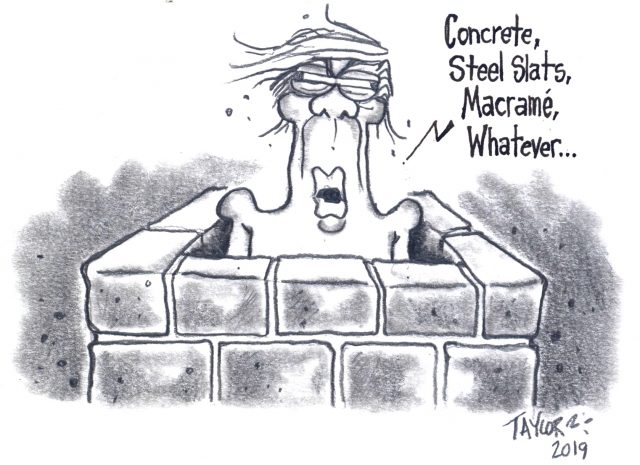 “It’s pretty clear that what’s driving Trump now isn’t a governing strategy. It isn’t a re-election strategy. It’s a “hold enough of your base to stop the Senate from convicting when the House impeaches” strategy. Trump must expect that the Mueller report will be very bad for him.”

Trump chaos, Russian information warfare, reelection, impeachment, and — of course — “Build The Wall!” The high notes — or deeply low notes — of the past few days raise a herd of questions about what in the hell could possibly be next.

A good starting point, Trump has boxed himself in and is holding us hostage. A shocking factoid from the New York Times on how we got here – Trump’s Wall was not originally a ‘thing’: The Border Wall: How a Potent Symbol Is Now Boxing Trump In.

“Before it became the chief sticking point in a government shutdown drama that threatens to consume his presidency at a critical moment, President Trump’s promise to build a wall on the southwestern border was a memory trick for an undisciplined candidate.”

Trump can’t abandon his campaign promise without alienating his base and leaving him exposed to whatever political or legal process comes from Special Counsel Robert Mueller’s report. Good news came from new House Judiciary Chair Jerry Nadler (D-NY) who assured the nation of the Mueller report, “we will make sure it is public”. Nadler adds, “we are not going to wait for the Mueller report. There is plenty for the Judiciary Committee to look into right now.“

Trump fiddles and dabbles in Russian revisionism about the Soviet invasion of Afghanistan. Whoever amongst us thought Trump was incapable of explaining policy has now been proven wrong – sadly, his climax of clarity is a sales pitch for Putin’s nationalistic propaganda. Russian chess grandmaster, author and political activist Garry Kasparov tweeted, “The USSR was right to be in Afghanistan?! Not even Russia says this anymore! Has Trump forgotten which country he sold out to?”

While Trump was shilling Putin propaganda, NATO was coming to terms with “How Vladimir Putin is revolutionizing information warfare.” The Atlantic put forward a chilling account of what is happening: Russia And The Menace Of Unreality.

“At the NATO summit in Wales last week, General Philip Breedlove, the military alliance’s top commander, made a bold declaration. Russia, he said, is waging “the most amazing information warfare blitzkrieg we have ever seen in the history of information warfare.””

It’s an excellent article; let’s highlight one practical goal of Russian propaganda that brings a new focus to Russian appetite for Ukraine and a Trump history that extends back to his campaign and the GOP national convention:

“It was something of an underestimation. The new Russia doesn’t just deal in the petty disinformation, forgeries, lies, leaks, and cyber-sabotage usually associated with information warfare. It reinvents reality, creating mass hallucinations that then translate into political action. Take Novorossiya, the name Vladimir Putin has given to the huge wedge of southeastern Ukraine he might, or might not, consider annexing. The term is plucked from tsarist history, when it represented a different geographical space. Nobody who lives in that part of the world today ever thought of themselves as living in Novorossiya and bearing allegiance to it—at least until several months ago. Now, Novorossiya is being imagined into being: Russian media are showing maps of its ‘geography,’ while Kremlin-backed politicians are writing its ‘history’ into school textbooks. There’s a flag and even a news agency (in English and Russian). There are several Twitter feeds. It’s like something out of a Borges story—except for the very real casualties of the war conducted in its name.”

Russia is mastering information warfare with the help of useful idiots. Trump is not the only U.S. political figure aiding and abetting: Red Paul: The Senator From Kentucky Is Now Working For Vladimir Putin.

The opening statement is a good summary: “Since the day John McCain called him out, Rand Paul has been a veritable lobbyist for the Kremlin.” But the more interesting part of the story is Paul’s connections to a Putin ally linked to the Steele Dossier claim of convicted Trump lawyer Michael Cohen’s summer 2016 visit to Prague to ““clean up the mess left behind by Western media revelations” and arrange cash payments to be made Russian-organized hackers”.

Rand Paul is now an avid proponent of cooperation with multiple connections to Konstantin Kosachev who was in the right place to organize the Russian side of a Trump-Russia Prague meeting.

But as the CBC reported, there is even odder Trump-Russia news: Paul Whelan’s Arrest In Russia Looks Like ‘a classic set-up,’ Says Former CIA Spy.

U.S. citizen, Paul Whelan, was arrested in Moscow and charged with espionage. To many, the Whelan story fails a smell test – John Sipher, a 28-year CIA National Clandestine Service veteran, is interviewed for his view. Leaving the details to the article, Sipher offers a point of how Trump may well intercede in the handling of the incident:

“I think they need to treat this as an illegitimate arrest.

“But the thing to look at here is President Trump. He’s the wild card.

“In any normal sort of administration, we would see this for what it is and understand how the Russians play these spy games.

“But with President Trump, you just don’t know. He sees himself as a negotiator. He doesn’t understand the sort of history of these kind of things. He sometimes doesn’t, you know, distinguish between the good guys and the bad guys.

“This could be a play by Putin to try to get re-engaged with President Trump to his benefit.”

While Sipher “doesn’t believe Whalen is a spy”, he opines on an increasingly popular question of whether Whelan is a ruse, “swapping Whelan for Butina”. Butina being Maria Butina, who is cooperating with federal prosecutors after pleading guilty and stands “accused of acting as a Russian agent to infiltrate the powerful gun lobby group NRA and influence U.S. policy toward Moscow”.

Leonhardt starts by acknowledging that Trump is “demonstrably unfit for office” before he opines on neither waiting for Mueller nor “a rushed impeachment”, but instead counsels a “smarter approach is a series of sober-minded hearings to highlight Trump’s misconduct”.

Leonhardt makes a solid case for his ‘fitness’ prognosis before he shifts gears with, “The president must go.” He then proceeds to summarize Trump’s multiple threads of legal risk before ending with “What Now?” Leonhardt weaves through suggestions of how to proceed before ending with:

“Finally, there is the hope — naïve though it may seem — that some Republicans will choose to act on principle…

“Throughout his career, Trump has worked hard to invent his own reality, and largely succeeded. …whatever happens in 2019, his false version of reality will not survive history, just as Nixon’s did not. Which side of that history do today’s Republicans want to be on?”

Convinced? Maybe not, but remember, we are no longer discussing if; we are discussing how Trump “must go”.