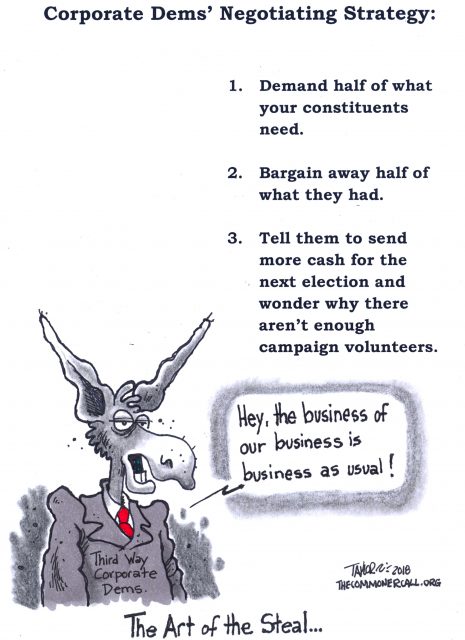 “The party of the resistance is recklessly taking the path of least resistance on climate and inequality.”

Justice Democrats—an advocacy group that helped organize recent mobilizations in support of a Green New Deal—declared in a statement that the Democratic leadership appears dead-set on taking the “path of least resistance” when it comes to tackling the climate crisis.

“Nancy Pelosi and the Democratic Party leadership seem to be pushing forward a weak Select Committee that has no subpoena power, that allows participation from members of Congress who take donations from the fossil fuel industry, and that has no explicit goals regarding the mass economic mobilization needed to match the [United Nations’] recommendations on scale and timeline,” Justice Democrats spokesman Waleed Shahid said in a statement.

Varshini Prakash, founder of the youth-led Sunrise Movement, said refusal to embrace a Green New Deal “would be a dereliction of duty from Nancy Pelosi and Democratic leadership.”

The Democratic leadership is working to undermine the surging demand for a Green New Deal Select Committee by reviving an old climate panel that could have even less authority than its previous iteration, which had subpoena power.

As Common Dreams reported last week, green groups and youth climate leaders warned that the Democratic leadership is working to undermine the surging demand for a Green New Deal Select Committee by reviving an old climate panel that could have even less authority than its previous iteration, which had subpoena power.

Without this power, critics argue, the committee will be unable to compel fossil fuel executives to testify and turn over key documents.

“It’s extremely disappointing that the current proposal may be even weaker than Pelosi’s previous Select Committee on climate in 2007,” Shahid said on Friday. “Democratic leadership still has time to create a Select Committee on a Green New Deal and support a serious proposal that holds fossil fuel billionaires accountable and is based on what science demands.”

“We have yet to hear from leader Nancy Pelosi what the mandate of the ‘Select Committee on the Climate Crisis’ will be,” added Prakash. “If what we’re hearing is true… then such a committee will be even weaker than the one from a decade ago. This is not the leadership this moment calls for.”

According to the U.N.’s Intergovernmental Panel on Climate Change (IPCC), carbon emissions must be cut in half by 2030 if the world is to avert catastrophe.

After Pelosi’s announcement on Friday, critics argued once more that Democrats must commit to pushing ahead with a bold climate plan that matches the alarming scientific reality, not just more hearings.

Thanks to a groundswell of organizing and protests at the offices of key congressional leaders like Pelosi and incoming House Majority Leader Steny Hoyer (D-Md.), nearly 40 House Democrats have expressed support for a Green New Deal Select Committee.

“By developing a plan for a Green New Deal, we have an opportunity to create millions of good-paying jobs, virtually eliminate poverty in the United States, and invest in a just transition for communities that have been left behind by racism and corporate greed,” Prakash said.

But in an interview with E&E News last week, Castor said that while Green New Deal proponents “have some terrific ideas,” the bold proposal supported by 81 percent of Americans will not be the “sole focus” of the new Select Committee on the Climate Crisis.

In response, Justice Democrats asked, “Your sole focus won’t be to propose solutions that match the urgency and scale recommended by the U.N.’s IPCC climate report?”