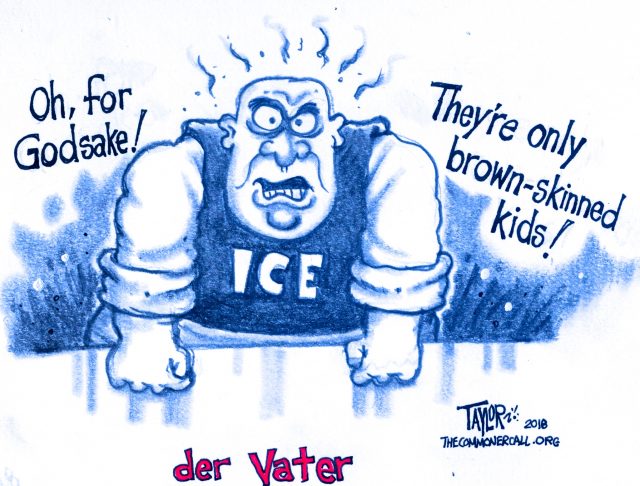 “A reminder that, yes, this is who the U.S. is. The U.S. is a country that murders children both directly and indirectly in a myriad of ways.”

An eight-year-old Guatemalan boy died in the custody of U.S. Customs and Border Protection (CBP) shortly after midnight on Christmas Day, the second death of a migrant child detained by the agency this month alone.

According to the Associated Press:

“The boy showed “signs of potential illness” Monday and was taken with his father to a hospital in Alamogordo, New Mexico, the agency said. There, he was diagnosed with a cold and a fever, was given prescriptions for amoxicillin and Ibuprofen and released Monday afternoon after being held 90 minutes for observation, the agency said.

“The boy was returned to the hospital Monday evening with nausea and vomiting and died there just hours later, CBP said.

“The agency said the cause of the boy’s death has not been determined and that it has notified the Department of Homeland Security’s inspector general and the Guatemalan government.”

The death of the eight-year-old Guatemalan boy, whose name has yet to be made public, comes just over a week after seven-year-old Jakelin Ameí Caal—also from Guatemala—died of “dehydration and shock” while in CBP custody.

Caal’s death sparked outrage at home and abroad, and Felipe González Morales—United Nations special rapporteur on the human rights of migrants—demanded an independent probe and an immediate halt to the detention of immigrant children.

“A reminder that, yes, this is who the U.S. is,” political activist Jonathan Cohn wrote on Twitter following the eight-year-old boy’s death. “The U.S. is a country that murders children both directly and indirectly in a myriad of ways.”

He described some of the actions of Border Patrol as “borderline inhumane.”

THE 4-YEAR-OLD boy and his parents had been lost for days in the desert and were desperately thirsty. Mario, a new Border Patrol officer, had received a call that there were migrants in the area and went out looking for them near the village of Menagers Dam, or Ali Ak Chin, on the Tohono O’odham reservation in Arizona. It was nearly dawn when Mario first spotted the mother in a wash. The family readily gave themselves up, and the woman told Mario that they needed water.

“They were pretty banged up,” Mario told The Intercept. “They were in distress.” He alerted his superior officer to his location. Just as the officer was arriving on the scene, Mario handed the 4-year-old boy a jug of water. Before the boy could take a sip, however, the officer kicked the jug out of the child’s hands and barked, “There’s no amnesty here.” He then reprimanded Mario for offering him water, warning him, “Don’t go south on me.” In other words, don’t show an ounce of sympathy for those from below the border.

Mario said he was shocked and offended by the officer’s actions. But it was just one of many incidents of brutality that he would witness during his two years with the Border Patrol, about which he is speaking out for the first time.

The Intercept is identifying Mario by a pseudonym because he still works for a federal agency, and fears that using his name would lead to reprisals and jeopardize his job. A military veteran, Mario enlisted in the Border Patrol in 2009 and resigned in 2011. Although he has been out of the Border Patrol for years, his account sheds light on practices that reportedly continue today, and provides a rare insight into the culture of an agency that has been rhetorically emboldened by the Trump administration and promised more money, personnel, and technology to carry out aggressive border enforcement.

Assaults and other abuses

In wide-ranging conversations, Mario discussed assaults and other abuses against migrants, a lack of effective oversight, and a disturbing culture of dehumanization in the agency. He says that he has decided to step forward to tell the American public about conduct he found embarrassing, cruel, and unregulated.

The Intercept has not been able to corroborate all of the specific details of Mario’s claims, but two other former personnel who have spoken publicly about problems with the agency — James Tomsheck, the former head of internal affairs for Customs and Border Protection, and Francisco Cantú, author of a recent Border Patrol memoir, who served in the same station as Mario — say that his stories line up with their knowledge and experiences. They are also corroborated by complaints filed by migrants and allegations published by NGOs and news outlets. Mario confirmed his position in the agency with photographs of himself in uniform, old ID cards, serial numbers of BP-issued gear, as well as detailed knowledge of the area in Arizona where he was posted, Ajo station in the Tucson sector.

As the part of Customs and Border Protection, the nation’s largest federal law enforcement agency, the Border Patrol is notoriously opaque. Most of its actions occur in locked-door stations, holding facilities, or remote desert regions inaccessible to the public, journalists, and lawmakers. …

Following the “horrific” death last week of Jakelin Caal, the 7-year-old refugee from Guatemala who died while detained by the U.S. Customs and Border Patrol in Texas, human rights activist on Thursday night were confronted outside the home of CBP’s Commissioner Kevin McAleenan in Virginia as they projected pictures onto the house of Caal and other immigrants who have recently died or been killed while in U.S. custody.

While they projected images of Caal, Roxsana Hernandez and Claudia Gomez Gonzalez alongside a call for the commissioner to resign, McAleenan’s wife confronted the activists—members of the advocacy group CREDO Action—to defend her husband’s work for the Trump administration.

“He’s actually a good guy,” his wife tells them. “I wish you would actually just learn and see all the stuff that he is doing… to help. Honestly.”

Asked if McAleenan was home, his wife explained, “No, he’s working.” To which one of the activists replied: “He’s working for an administration that’s killing children at the border.”

Watch the live stream (the exchange begins at approximately 18:08), below.

Link to Story and 33-Minute Video

PETITION:
CBP Commissioner Kevin McAleenan has blood on his hands and must resign.
Link Here