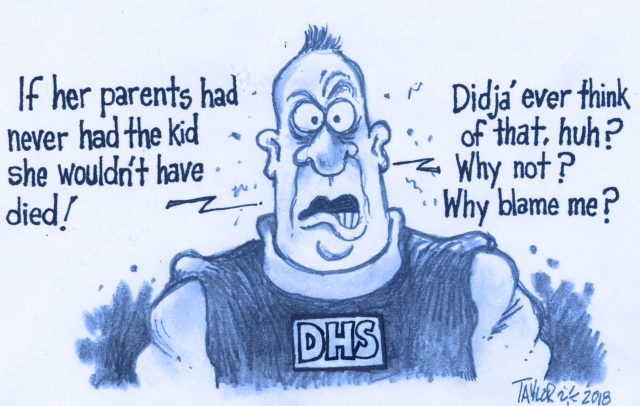 [Editor’s Note: Here we have yet another example of typical conservative Republican ‘pro-life’ compassion, responsibility and (of course) family values we have all come to expect. — Mark L. Taylor]

Department of Homeland Security Secretary Kirstjen Nielsen on Friday blamed the family of a 7-year-old migrant girl for her death in U.S. custody, saying the group never should have tried to come to the U.S. without authorization.

Nielsen said Jakelin Caal Maquin’s death was “heart-wrenching” and said her heart goes out to the child’s family. But she also used the opportunity to argue against migrants and asylum-seekers making the journey to the U.S.

“You know, this is just a very sad example of the dangers of this journey,” Nielsen said on “Fox & Friends.” “This family chose to cross illegally.”

The girl, whose identity was revealed Friday morning, came from Guatemala with her father in a group of 163 migrants, according to DHS. She died from shock and dehydration roughly 24 hours after being brought to a hospital, the Washington Post first reported.

DHS faced a flurry of condemnation after news broke of Jakelin’s death late Thursday. In multiple statements, the agency argued it had done everything it could to prevent Jakelin’s death in the relatively brief time she was in the custody of U.S. Customs and Border Protection. …

We Are Governed By Monsters Now

The Trump administration’s cruelty is not just deliberate. It is casual.

Unimaginable. Except that, you know, it’s not.

“According to CBP records, the girl and her father were taken into custody about 10 p.m. Dec. 6 south of Lordsburg, N.M., as part of a group of 163 people who approached U.S. agents to turn themselves in. More than eight hours later, the child began having seizures at 6:25 a.m., CBP records show. Emergency responders, who arrived soon after, measured her body temperature at 105.7 degrees, and according to a statement from CBP, she “reportedly had not eaten or consumed water for several days.”

“After a helicopter flight to Providence Children’s Hospital in El Paso, the child went into cardiac arrest and “was revived,” according to the agency. “However, the child did not recover and died at the hospital less than 24 hours after being transported,” CBP said. The agency did not release the name of the girl or her father, but the father remains in El Paso awaiting a meeting with Guatemalan consular officials, according to CBP. The agency is investigating the incident to ensure appropriate policies were followed, it said.”

(Although it’s very hard reading this story not to remember this video of Border Patrol officers pouring out water left in the desert for migrants by church groups.)

Cruel, but not unusual

Back before he was exposed as not merely a big-hat-wearing fool, but a Russian dupeof a big-hat-wearing fool, Milwaukee Sheriff David Clarke, an early and vociferous supporter of El Caudillo del Mar-A-Lago, allowed an inmate in his jail to die of thirst. We largely are rid of David Clarke from our politics, thank god, but apparently his philosophy of incarceration lives on.

This is cruel, but not unusual. The de facto policy of this administration* is to make the refugee experience so deadly as to discourage people from attempting to flee to this country. The de facto policy of this administration is to whiten the population of this country by any means necessary. (That’s why a racist goon like Stephen Miller works in the White House, whereas, with any other president, he wouldn’t be allowed within 100 miles of the District of Columbia.) This policy is general throughout the government. While this child was dying in custody, the folks over at ICE once again used her fellow refugees as bait, rounding up people who’d come forward to “sponsor” an immigrant child. As I said, cruel, but not unusual. …

(Commoner Call cartoons by Mark L. Taylor, 2017/2018. Open source and free for non-derivative use with link to www.thecommonercall.org )

“Fourteen hundred kids could be released immediately if the Trump Administration changed its fingerprinting policy.”

“Fourteen hundred kids could be released immediately if the Trump Administration changed its fingerprinting policy.”

Democratic lawmakers joined protesters in a demonstration Saturday in the border town of Tornillo, Texas, where about 2,700 young immigrants are currently being held in a detention center—with some having languished there for months.

“We asked them about the conditions and they kind of nodded their heads, ‘It’s okay,’ but what are they going to say when everyone around them is watching?” he said. “But there was something in the look on their faces, that we saw the way they weren’t really engaged.”

The center opened last summer and was intended to be a facility where children who had arrived in the U.S. without parents or guardians—or who had been separated from their parents by the Trump administration—would stay for just 30 days before being released to U.S.-based family members who could sponsor them.

But as O’Rourke told the crowd outside the center, many of the children have been there for months …