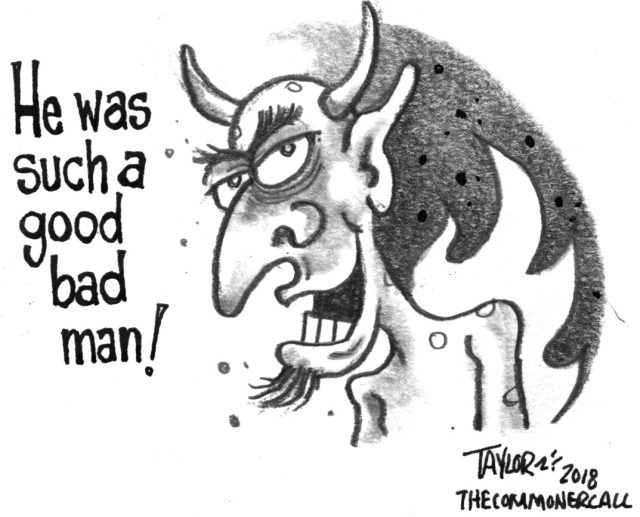 “You cannot make this stuff up.”

And through it all timid congressional democrats let H.W. and his criminal family slide by. If they do the same with the Trump crime family the costs and damage will be even greater with a President Ivanka Trump in 2024.

The Crimes Of George H.W. Bush

This week marks the burial of the 41st president of the United States, George Herbert Walker Bush. In the week since his passing, many in the press have taken this time to describe President Bush as a model president, statesmen and in contrast to Donald Trump. But in looking at the past with rose tinted eyes we ignore how the Bush Crime family led us to Donald Trump, and it is in that spirit that Lamar Waldron joins Thom Hartmann to go over the life and crimes of George H.W. Bush. The Real story that is not being told on the corporate media.

Family Traditions: What He Learned From Daddy H.W. Could Fill The Docket At The World Court

George H.W. Bush has been laid to rest but some of his murderous policies lived on through his son’s administration and until this day.

[Editor’s Note: The following article by legendary investigative reporter Robert Parry appeared back in ’05. It provides much needed background to W’s teary-eyed tribute to his father at the state funeral in DC. Many innocents around the world also have reason to cry about the legacy of George H.W. Bush. Too bad the mainstream media whitewashed it all with their non-stop obsequious praise. — Mark L. Taylor]

By refusing to admit personal misjudgments on Iraq, George W. Bush instead is pushing the United States toward becoming what might be called a permanent “counter-terrorist” state, which uses torture, cross-border death squads and even collective punishments to defeat perceived enemies in Iraq and around the world.

Since securing a second term, Bush has pressed ahead with this hard-line strategy, in part by removing dissidents inside his administration while retaining or promoting his protégés. Bush also has started prepping his younger brother Jeb as a possible successor in 2008, which could help extend George W.’s war policies while keeping any damaging secrets under the Bush family’s control.

As a centerpiece of this tougher strategy to pacify Iraq, Bush is contemplating the adoption of the brutal practices that were used to suppress leftist peasant uprisings in Central America in the 1980s. The Pentagon is “intensively debating” a new policy for Iraq called the “Salvador option,” Newsweek magazine reported on Jan. 9.

The strategy is named after the Reagan-Bush administration’s “still-secret strategy” of supporting El Salvador’s right-wing security forces, which operated clandestine “death squads” to eliminate both leftist guerrillas and their civilian sympathizers, Newsweek reported. “Many U.S. conservatives consider the policy to have been a success – despite the deaths of innocent civilians,” Newsweek wrote.

The magazine also noted that a number of Bush administration officials were leading figures in the Central American operations of the 1980s, such as John Negroponte, who was then U.S. Ambassador to Honduras and is now U.S. Ambassador to Iraq.

The insurgencies in El Salvador and Guatemala were crushed through the slaughter of tens of thousands of civilians. In Guatemala, about 200,000 people perished, including what a truth commission later termed a genocide against Mayan Indians in the Guatemalan highlands. In El Salvador, about 70,000 died including massacres of whole villages, such as the slaughter carried out by a U.S.-trained battalion against hundreds of men, women and children in and around the town of El Mozote in 1981.

The Reagan-Bush strategy also had a domestic component, the so-called “perception management” operation that employed sophisticated propaganda to manipulate the fears of the American people while hiding the ugly reality of the wars. The Reagan-Bush administration justified its actions in Central America by portraying the popular uprisings as an attempt by the Soviet Union to establish a beachhead in the Americas to threaten the U.S. southern border.

By employing the “Salvador option” in Iraq, the U.S. military would crank up the pain, especially in Sunni Muslim areas where resistance to the U.S. occupation of Iraq has been strongest. In effect, Bush would assign other Iraqi ethnic groups the job of leading the “death squad” campaign against the Sunnis. …

Don’t depend upon the corporate media to tell the truth…