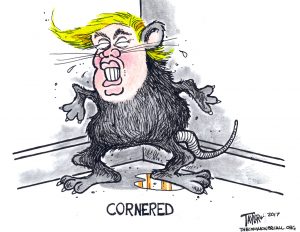 In the Trumputin world of organized crime, Michael Cohen has committed the ultimate betrayal: he’s helped Robert Mueller prove beyond doubt that don Putin in the Kremlin put his very own bagman into the White House.

Cohen is the ultimate mobster nightmare, the inside attorney who flips. Many a consigliere has died at Mafia hands for far less.

For what might come next, see Jamal Khashoggi, the Washington Post reporter literally butchered by the Saudi branch of the Trumputin oligarchy.

Nixon’s lawyer, John Dean, called Watergate a “cancer on the presidency.” Cohen has confirmed that the “conspiracy theories” about Trump colluding with Putin are an epic understatement.

There is no reason to doubt that Donald Trump will blow up this entire Earth and all of us with it before he faces the true karmic payback of a sad, sad life defined entirely by organized crime.

Mueller’s “report” has thus far been seeping out in the indictments against Trump’s enablers, a list that may ultimately include Trump’s children, Vice President Mike Pence, former attorney general Jeff Sessions, and many more, including The Donald himself.

Still missing is the vital context: Trump’s decades of money laundering for the Putin oligarchy.

Watergate did not come in a vacuum. Nixon had already committed treason by sabotaging 1968 Vietnam peace talks. He also illegally bombed Cambodia, feeding the slaughter of at least 3 million people.

In 1972, at Sundance Magazine, I edited a massive exposé by Jeff Gerth detailing Nixon’s lifelong ties to the criminal underworld, much of it centered in Florida.

None of that played a major overt role in Dick’s fall.

But Trump’s decades of money laundering are no secret. As documented by David Cay Johnston, Craig Unger, and many more, Trump used some 1300 shady real estate deals with Russian oligarchs to flip a multibillion-dollar debt and at least four bankruptcies into a cash-rich buying spree. His flagship Trump Tower on Manhattan’s Fifth Avenue is a porous membrane for ruble-to-dollar osmosis.

All that set the stage for 2016. Because he didn’t plan on winning, Trump ran the campaign as just another self-promoting reality show. The Trump Tower he wanted to build in Moscow, with its $50-million Putin penthouse, was to be his flashiest combination showpiece and laundromat.

Putin is vastly more intelligent and capable than Trump, and had a far better grasp on the power of such double-dealings. His oligarchs would be immune from future prosecutions, as Mueller’s futile indictments of so many Kremlin trolls has shown. But their puny White House bagman, an American Boris Yeltsin, would deliver immense fiscal opportunities and stunning geopolitical gains (at least in the short term).

Trump had no clue. True to his authoritarian DNA, he’s fled immediately to fascism, assaulting every aspect of democracy with the blood rage of a cornered rat.

His goose-stepping GOP has followed suit. Fascist coups in Wisconsin, Michigan, and North Carolina are well underway. The governorship of Georgia has been stolen. The gerrymandered Ohio legislature is banning abortion. And that’s just for openers.

With the Supreme Court, a zombie Senate majority, a limp corporate Democrat non-opposition, and Fox as his mighty fortress, Trump is hunkered down for a fight to the death … OUR death.

He’s injected the economy with a methamphetamine tax cut for the rich that will crash it all. Just when we don’t know.

But we now face a four-way fiscal catastrophe: the stock market, housing market, student loan debt, and corporate debt. The sound of that house of cards crashing will echo for decades. Trump is also driving an ecological collapse that’s already dwarfing them all.

He’s already lost the US House and some statehouses. He’s been unable to stop the trickle of Mueller indictments.

Should that turn into a tsunami, he, his kids, and a slew of his partners in crime are certain to be indicted, many in New York, where presidential pardons are worthless.

We don’t yet know how far Cohen’s inside information will reach, or what more he has to offer. We don’t know if Mueller will do anything with Trump’s criminal past. We don’t know what might turn the Trumputin catastrophe thermonuclear, as Nixon’s earlier treasons might have done to Watergate.

We also don’t know how long Trumputin will let Michael Cohen live. There’s no reason to believe the New York prosecutors who want him in prison can protect him there.

Nor is there reason to doubt that Donald Trump will blow up this entire Earth and all of us with it before he faces the true karmic payback of a sad, sad life defined entirely by organized crime.

(Commoner Call cartoon by Mark L. Taylor, 2017. Open source and free for non-derivative use with link to www.the commonercall.org )